Editors’ Note: According to a new Pew poll, half of Israeli Jews have come to seek not only a Jewish majority but even Jewish exclusivity in Israel. That doesn’t bode well for Arab-Jewish coexistence in Israel, writes Shibley Telhami—even aside from what happens in the West Bank and Gaza. This post originally appeared on the Monkey Cage blog.

When U.S. leaders and commentators warn that the absence of a two-state solution to the Israeli-Palestinian conflict will make it impossible for Israel to be both a Jewish and democratic state, they generally mean that a Jewish democracy requires a Jewish majority; if Israel encompasses the West Bank and Gaza, Arabs will become a majority. What they may not have realized is that, in the meantime, half of Israeli Jews have come to seek not only a Jewish majority but even Jewish exclusivity.

That is one of the most troubling findings of a new Pew poll in Israel. And it doesn’t bode well for Arab-Jewish coexistence in Israel—even aside from what happens in the West Bank and Gaza.

This major study was conducted from October 14, 2014, to May 21, 2015, among 5,601 Israeli adults ages 18 and older. (Disclosure: I served as an adviser to the project). It found that 48 percent of all Israeli Jews agree with the statement “Arabs should be expelled or transferred from Israel,” while 46 percent disagreed. Even more troubling, the majority of every non-secular Jewish group, including 71 percent of Datim (modern orthodox Jews) agreed with the statement. 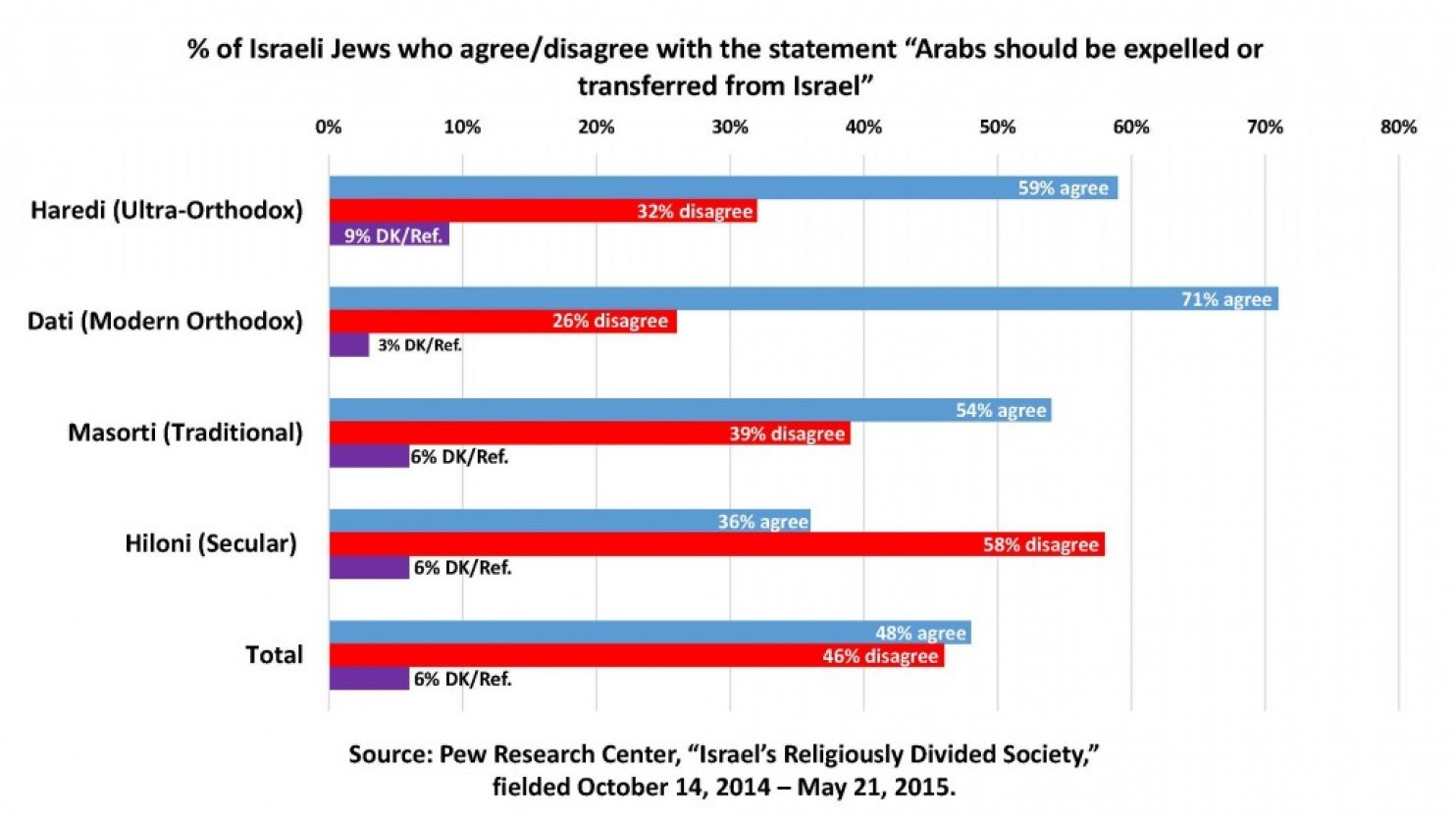 While age is not much of a factor when it comes to attitudes toward expelling Arabs from Israel, younger Israelis are slightly more likely to agree with the statement that Arabs should be expelled than older Israelis. 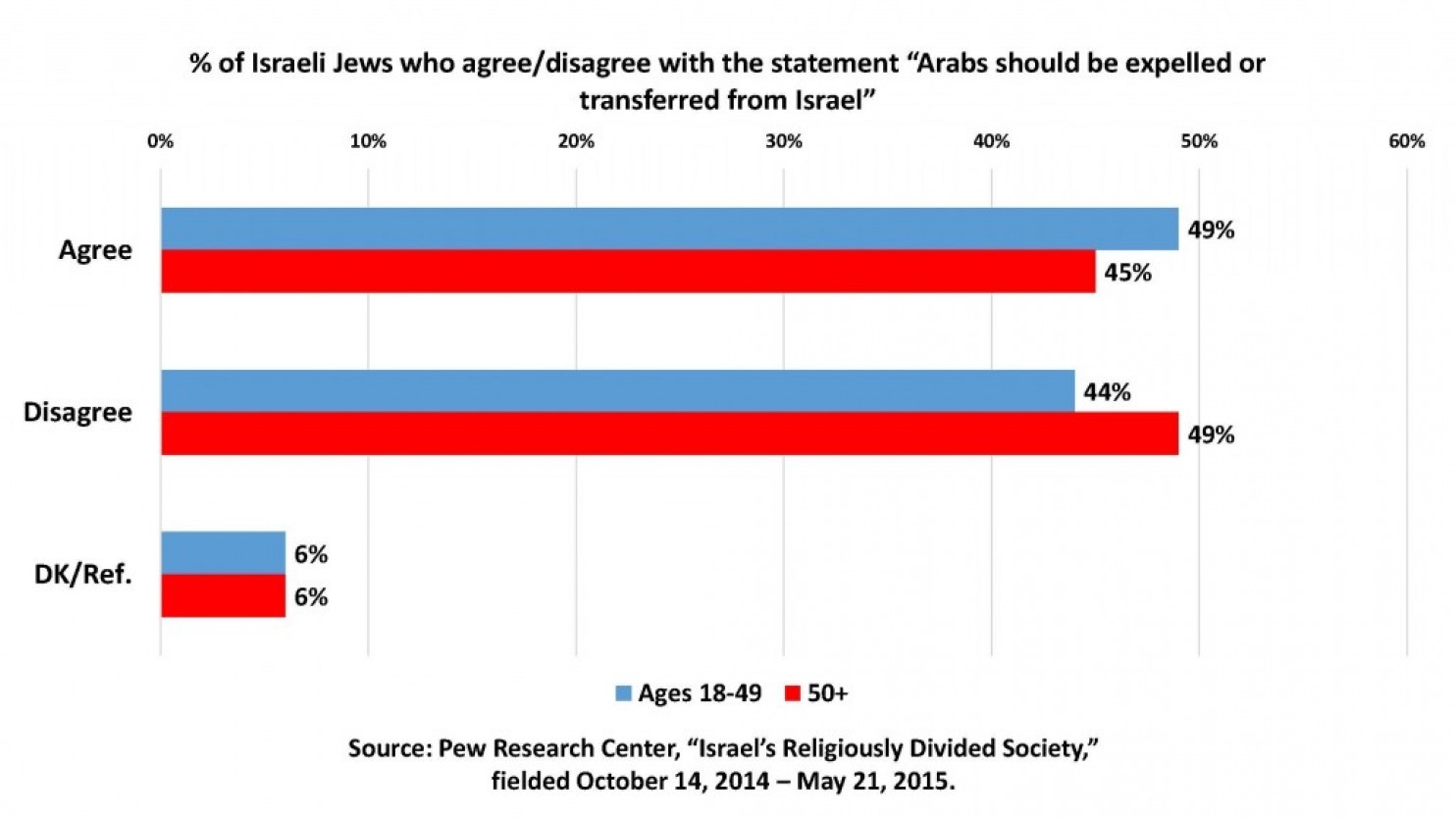 These attitudes are anchored in a broader view of identity and of the nature of the Israeli state. Overall, only about a third of Israeli Jews say their Israeli identity takes precedence over their Jewish identity, with the overwhelming majority of every group, except for secular Jews, saying their Jewishness comes first. 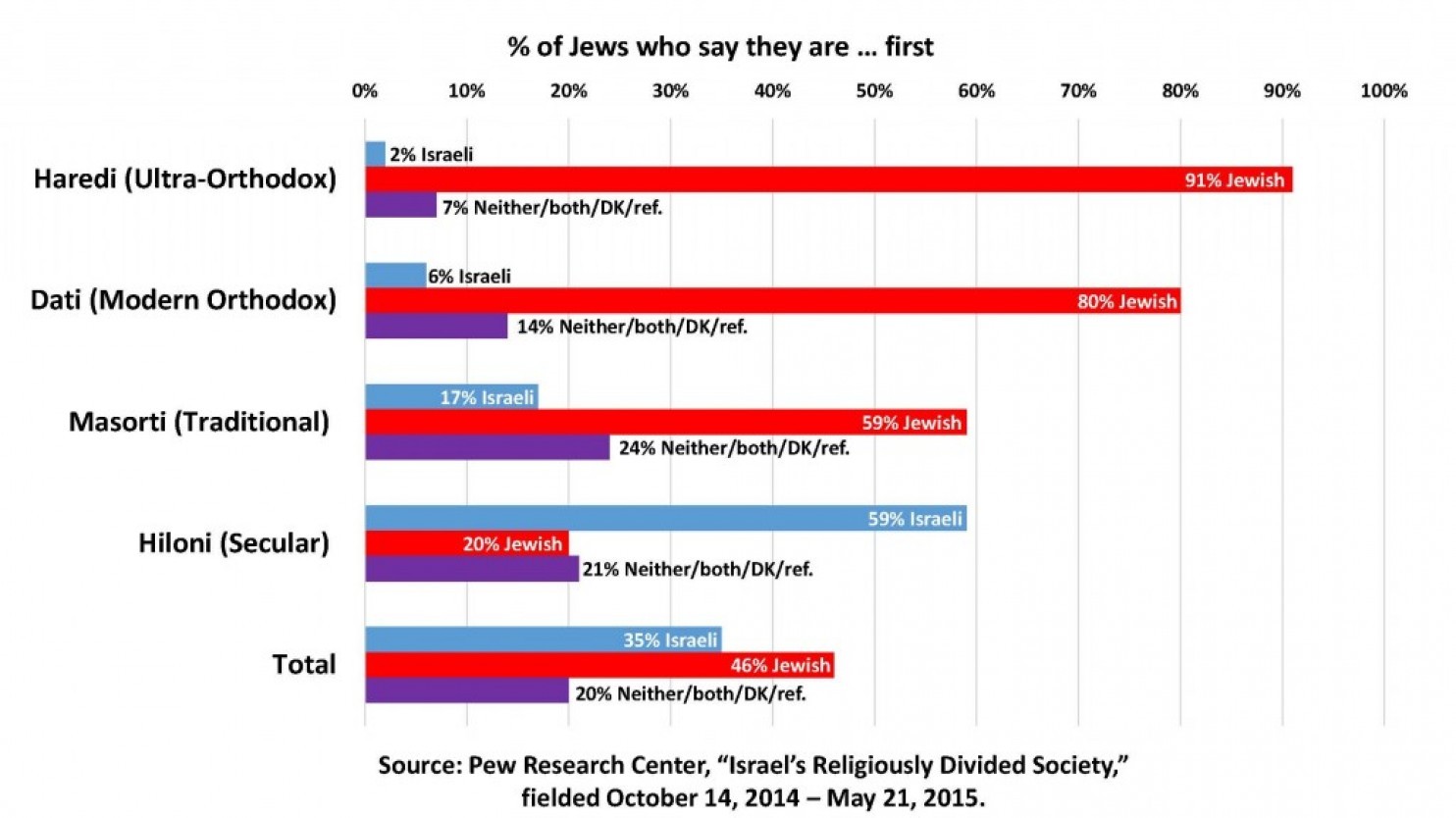 This view has consequences for citizen rights. Not surprisingly, the overwhelming majority of all Jewish Israelis (98 percent) feel that Jews around the world have a birthright to make aliya (immigration to Israel with automatic Israeli citizenship). But what is striking is that 79 percent of all Jews, including 69 percent of Hilonim (secular Jews) say that Jews deserve “preferential treatment” in Israel—so much for the notion of democracy with full equal rights for all citizens. 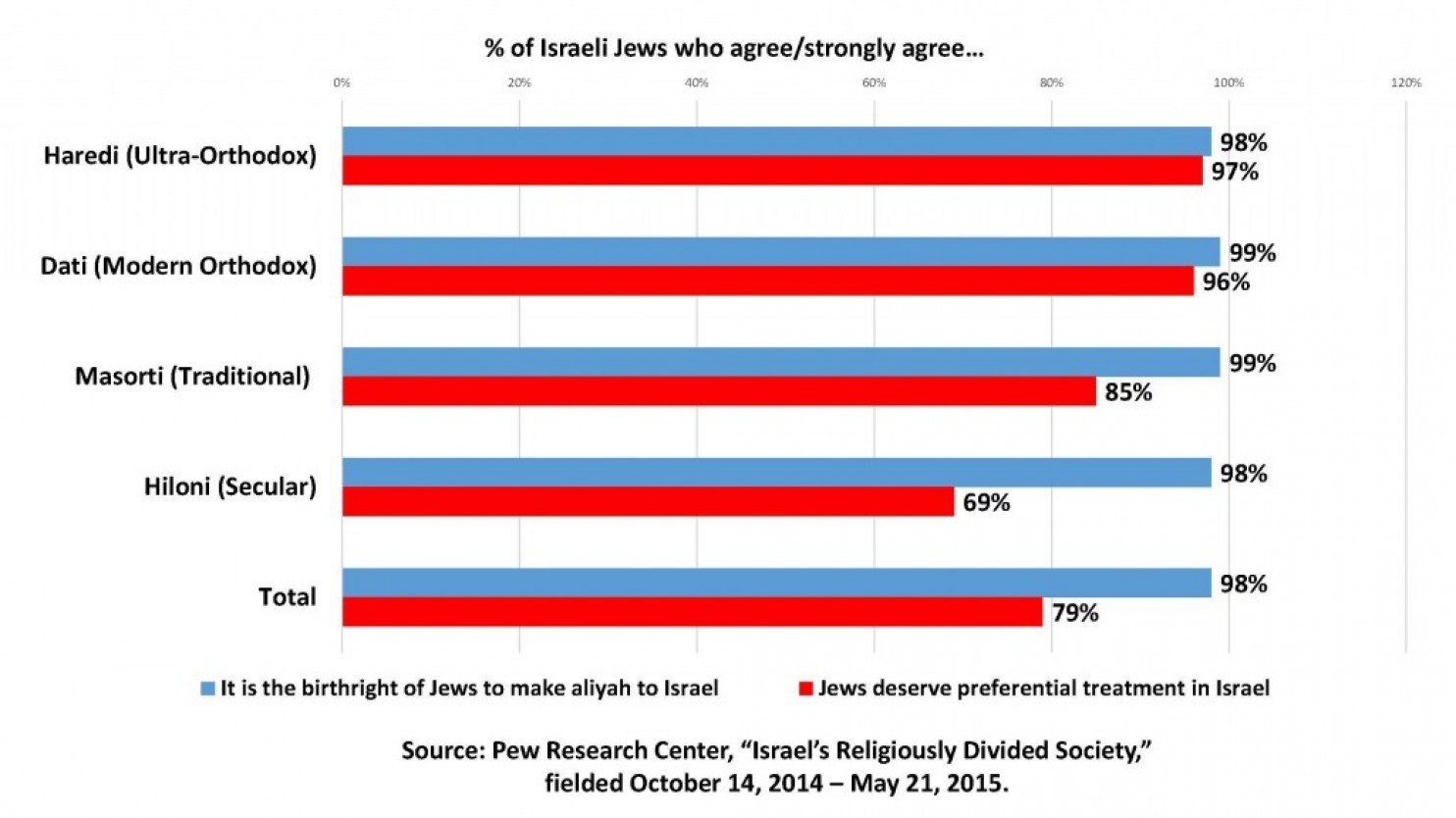 These attitudes spell trouble for Arab citizens of Israel who constitute 20 percent of Israel’s citizens. It’s true that attitudes are dynamic; they are partly a function of Jewish-Arab relations within Israel itself, but also outside, especially within the broader Palestinian-Israeli conflict. Like their Jewish counterparts, Arab citizens of Israel (mostly Muslim, but also including Christians and Druze), identify themselves with their ethnicity (Palestinian or Arab) or religion above their Israeli citizenship. And these ethnic/religious identities intensify when conflict between Israel and the Palestinians in the West Bank and Gaza intensifies. There is no way to fully divorce the broader Palestinian-Israeli conflict from Arab-Jewish relations within Israel.

In recent years, this latter linkage has become central for two reasons: loss of hope for a two-state solution, and the rise of social media that has displayed extremist attitudes that used to be limited to private space. In the era of Facebook and Twitter, Arab and Jewish citizens post attitudes that deeply offend the other: An Arab expresses joy at the death of Israeli soldiers killed by Palestinians, while a Jew posts a sign reading “death to Arabs.” Hardly the stuff of co-existence. Leave it to opportunist politicians, extremists and incitement to do the rest.

But there is also an American responsibility—not so much with regard to failure of diplomatic efforts, but with the very positing of the nature of the conflict itself, and the nature of the state of Israel. As President Obama considers steps he could undertake on the Israeli-Palestinian conflict before leaving office, he may contemplate addressing what has become a distorting and detrimental discourse that serves to give a pass to non-democratic attitudes, and diversion of attention from core problems.

First, there is something wrong with positing the possibility of Arabs as constituting a demographic problem for Israel. It legitimizes the privileging of Jewishness over democracy. It also distorts the reason why Israel is obligated to end occupation of the West Bank and Gaza; it has nothing to do with the character of Israel as such, but with international law and United Nations resolutions.

Second, while states can define themselves as they wish (and are accepted by the international community accordingly), the American embrace of the “Jewishness” of Israel, cannot be decoupled from the Palestinian-Israeli context, or from the overarching American demand that all states must be for all their citizens equally.

In part, this is based on the notion that the UN General Assembly (Resolution 181) recommended in 1947 dividing mandatory Palestine into an “Arab” and a “Jewish” State. In part, it’s based on the notion that the Palestinian-Israeli conflict is a political conflict that can be resolved through two states, one manifesting the self-determination of Jews as a people, and one manifesting the right of self-determination of Palestinians as a people. The two were bound together. An embrace of a Jewish state that excludes a Palestinian state defeats the principle.

If two states become impossible, America chooses democracy over Jewishness. In fact, this has been consistently reflected in American public attitudes across the political spectrum, most recently in this November 2015poll; in the absence of a two-state solution, 72 percent of Americans would want a democratic Israel, even if it meant that Israel ceases to be a Jewish state with a Jewish majority.

More centrally, even with two states—one manifesting Jewish self determination and one Palestinian self-determination—an overarching, principled American position takes precedence: If Israel is a state of the Jewish people, it must also be above all a state of all its citizens equally; (and if Palestine is to be a state of the Palestinian people, it must also be a state of all its citizens equally). This democratic principle, highlighted front and center in a reformulated American position, can help avoid legitimizing undemocratic attitudes in the name of Jewish identity.