Editors’ Note: If the Islamic State has now added foreign operations to its government spending, as the recent attacks suggest, the prospects are frightening. It’s al-Qaida with even less of a conscience, more manpower, and way more money, writes Will McCants. How did this happen? This post originally appeared on Foreign Policy.

The Islamic State has emerged over the past two weeks as one of the world’s most aggressive state sponsors of terrorism. If its claims are to be believed, its members carried out sophisticated mass casualty attacks against two of the five permanent members of the U.N. Security Council—France and Russia. The carnage in Paris on Friday was the worst attack in France since the end of World War II; the downing of a Russian plane after its takeoff from the Egyptian city of Sharm el-Sheikh on Oct. 31, one of the worst terrorist attacks on Russian civilians since the fall of the Soviet Union. For good measure, the Islamic State also carried out synchronized suicide bombings in Beirut on Nov. 12, killing dozens of civilians in a Hezbollah-controlled neighborhood.

We have only recently grown accustomed to thinking of the Islamic State as an actual state, much less a state sponsor of terrorism. For most its history, the Islamic State was a terrorist group or an insurgency. But as it grew in strength, it looked more like a government. Not only did it monopolize violence in the areas it controlled, it took out the trash and collected taxes. It has been called a “proto-state” and a “quasi-state.” Whatever the terminology, it’s much more than an insurgent group now—and it has millions of dollars at its disposal to fund its military adventures at home and abroad.

Despite the Islamic State’s adherence to the global jihadi ideology of al Qaeda, which urges attacks on the West, it has spent most of its money on state-building in the Middle East and North Africa, with occasional pauses to terrorize neighbors like Turkey and Saudi Arabia. The international community could take some small comfort from the Islamic State’s domestic focus—better it spend its money on infrastructure than on financing terrorist plots abroad.

But if the Islamic State has now added foreign operations to its government spending, as the recent attacks suggest, the prospects are frightening. It has the wealth of a state, the ambition of an imperial power, and an enemies list that reads like the roll call of the United Nations. It’s al Qaeda with even less of a conscience, more manpower, and way more money. 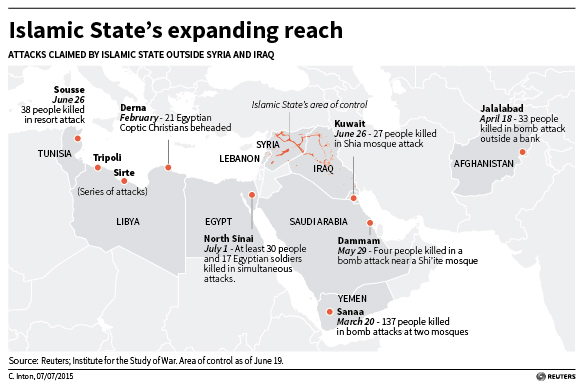 The Islamic State’s war chest is estimated to fall within the range of $1 billion to $2 billion a year. That’s not equal to the U.S. defense budget, but it’s richer than some well-established states like Burma and Mauritania. And its revenues certainly dwarf those of al Qaeda, which to date has wreaked far more havoc abroad with far less funds than its jihadi rival.

State sponsors of terrorism usually support proxy groups because they don’t want their sponsorship known, for fear that their intended victims will strike back hard. Think of the Lockerbie plane bombing over Scotland, reportedly orchestrated by late Libyan leader Muammar al-Qaddafi.

But that’s not what’s going on here. The Islamic State has brazenly claimed the attacks, even if intelligence services cannot yet be sure it actually directed them. Nevertheless, there’s no doubting that the Islamic State wants its powerful foreign enemies to know that it can inflict heavy losses on their civilian populations. The United States did the same on a much more horrific scale to Japanese civilians in World War II, which succeeded in securing Japan’s unconditional surrender. If the Islamic State had jet fighters and munitions, it would do the same—instead it is using human-guided munitions.

It’s almost more worrisome if it turns out that the Islamic State didn’t direct these attacks. Independent cells and affiliates with the ability to cause so much devastation will be harder to stop because they are not receiving instructions that can be intercepted.

It’s al Qaeda with even less of a conscience, more manpower, and way more money.

It’s not clear what the Islamic State hopes to achieve with these attacks. If it cares about continuing to control territory, it’s a bad idea to antagonize its most powerful enemies — especially in the case of Russia and Hezbollah, which have largely left the Islamic State alone. Perhaps it believes it is deterring further assaults on its territory, or perhaps it wants to score propaganda victories to win more recruits. Or perhaps it believes too much of its own apocalyptic rhetoric and is trying to provoke Armageddon. As happened after the 9/11 attacks with al Qaeda, we may not know its real reasoning for several years.

Still, we shouldn’t be too quick to impute rash thinking to the Islamic State. Its leaders have thought long and hard about the utility of violence and the value of scaring ordinary people. During the past decade, it carried out deadly attacks against Iraqi civilians to provoke the Iraqi government into overreacting or to scare the locals into accepting its rule. Its campaign of terror even extended to Iraq’s neighbors: Its predecessor, al Qaeda in Iraq, bombed a wedding party in 2005 in Amman to punish the Jordanian government for working with the Americans to stabilize Iraq.

For the founder of al Qaeda in Iraq, Abu Musab al-Zarqawi, scaring one’s enemies and rivals was a far more effective political strategy than trying to win them over. Whereas al Qaeda Central advocated winning the hearts and minds of the Muslim masses, Zarqawi wanted to frighten and polarize them. Attacking civilians was the most effective way to do so. His intellectual heirs in the Islamic State agree.

The idea is elaborated in one of the Islamic State’s favorite strategy manuals, The Management of Savagery. The book, written during the first year of the Iraq War, outlines a plan for reestablishing the global Islamic empire or caliphate. The anonymous author, who goes by the nom de guerre Abu Bakr Naji, advocates attacking civilians in enemy lands to deter their governments from interfering in jihadi state-building projects or to provoke them into overreacting and thus exhausting themselves. The usual Islamic restrictions on warfare should be suspended, he argues, so the jihadis can fight fire with fire.

Its leaders have thought long and hard about the utility of violence and the value of scaring ordinary people.

We know now that the Islamic State aspired to carry out attacks outside Iraq when Osama bin Laden was alive. In particular, it wanted to target Iran and Saudi Arabia because they were working against it in Iraq. In a public spat last year between al Qaeda chief Ayman al-Zawahiri and the spokesman for the Islamic State, the latter disclosed that al Qaeda Central had forbidden its affiliate from carrying out attacks abroad without its permission. The Islamic State bent the knee at the time, despite grumbling in its rank and file.

The grumbling was not just because Islamic State members wanted to take on their two greatest Muslim foes in the Middle East; the organization also fancied itself a proto-caliphate. It wanted to soften up its adversaries for an eventual takeover.

In the early years, from 2006 to 2010, the Islamic State was not a state by any definition of the word. At most, it was an insurgent group, until the American and Iraqi armies worked with Sunni tribes in Iraq to force it underground. Thereafter, it was a terrorist organization carrying out attacks on civilians primarily in Iraq.

But the Syrian civil war and the Americans’ withdrawal from Iraq provided an opportunity for the Islamic State to make good on its name. While other Sunni rebel groups fought central governments, without offering much of an alternative form of authority of their own, the Islamic State went about setting up its own government in the disgruntled Sunni tribal hinterland in Syria and Iraq.

As part of its state-building enterprise, the Islamic State patiently eliminated its rivals by assassinating and imprisoning them. Before they took over Raqqa, for example, Islamic State operatives kidnapped the head of the city council; it disappeared dozens more whom it anticipated would resist its rule. Once in charge, it grotesquely executed civilians who defied it. The Islamic State not only enforced scripturally mandated punishments to signal its piety; the punishments also terrified the populace. Defying the group was labeled apostasy, punishable by death.

And now the Islamic State has decided to terrorize its far enemies. So how should they react?

The international community’s usual policies for dealing with state sponsors of terrorism won’t work in the case of the Islamic State. It isn’t part of the international system, so trade embargoes or the freezing of banking accounts, which was effective against Libya, aren’t viable options here. Bans on weapon sales won’t matter either—the Islamic State will continue to capture weapons from its enemies or buy them on the black market.

To begin with, the Islamic State’s far enemies must decide what their goal is in this battle. Like other rogue states, it can be contained or even destroyed. Either policy has downsides. Containment leaves the state intact but weakens its ability to act beyond its borders. However, terrorism actually becomes a more attractive tool for a contained state, because it has fewer conventional options. Destroying a rogue state altogether gets rid of the problem—but as we saw over the past decade in Iraq, what comes next might be worse, especially if the state collapses all at once.

So far, the United States and its allies have opted for something between containment and swift destruction: strangulation. Working with a mix of local militias in Syria and Iraq, the allies are slowly tightening the noose around the Islamic State’s neck, taking territory on the periphery and moving toward its stronghold in western Iraq and eastern Syria. It has been a slow, agonizing process, but it has produced results: The Islamic State has lost a quarter of its territory over the past year. The glacial pace has been harshly criticized, but it has the virtue of giving enemies of the Islamic State time to absorb newly liberated cities without having to take charge of the entire territory all at once.

Attacks on civilians, like those we saw in Paris, are designed to force governments to drastically change their policies—to either rapidly deescalate, as President Ronald Reagan did in Lebanon after the bombings of the Marine barracks and U.S. Embassy in 1983, or to overreact with a major display of force. Before responding to the Islamic State’s latest attacks, the United States and its allies should contemplate the merits of the current policy and the major downsides of the alternatives before changing course.

The near-term prospects for the end of Islamic State attacks abroad are dim. As its government collapses in Syria and Iraq, the Islamic State will continue to lash out at its far enemies. And there are other places where it can relocate and operate in the open, like Libya. The Islamic State probably won’t have the same resources it has now as it loses more territory—but then again, it doesn’t take a fortune to fund attacks abroad.

Still, the Islamic State’s attacks may have finally galvanized the international community into action, in order to prevent further atrocities like those in Paris. As a result of more concerted international action, the Islamic State will likely see the slow-motion collapse of its government and an increasing denial of its ability to conquer new territory. This isn’t just what happens when a terrorist group overreaches—it’s the risk any state assumes when it uses terrorism as a tool of foreign policy.