Only a few hours after President Obama took the stage at American University to sell the American people on the Iranian nuclear deal—officially called the Joint Comprehensive Plan of Action, or JCPOA—I testified before the Senate Foreign Relations Committee on how the deal, if accepted, would likely impact the geopolitical dynamics of the Middle East and whether the deal will ultimately prove to be good or bad for U.S. security interests in that volatile region.

But the answers to these questions have less to do with the specific contours of the JCPOA—the level of access inspectors will have to critical Iranian nuclear facilities, when the various sanctions on Iran will be lifted, how exactly those sanctions can be reimposed if Iran is caught cheating, etc.—than with how the United States behaves toward the region in the wake of the nuclear agreement. The JCPOA—imperfect as it may be—imposes meaningful restrictions on the Iranian nuclear program for the next 15 years and creates strong disincentives for Iran to cheat. Those are both good things, but neither is likely to cause Iran to suddenly change course and abandon the destructive policies it has pursued in the region that have contributed to and exacerbated the conflicts currently engulfing the Middle East. However, there is no reason to think the JCPOA will cause Iran to become more aggressive, either.

What could potentially cause Iran to change its behavior—for good or ill—are the policies the United States pursues in the region going forward. If the United States uses the JCPOA as an excuse to further disengage from the region, it is highly likely that Iran’s goals will become more expansive and its policies more aggressive, believing that the United States no longer has the will or the capability to stop it. On the other hand, if the United States reacts to the JCPOA by stepping up its engagement in the region and acting decisively—providing real, meaningful assurances to its Gulf allies that it truly is concerned with protecting their security interests and pushing back hard on Iran in other areas, particularly in Syria—then it is very likely that the Iranians will respond in the same way they always have the United States has flexed its muscles: by backing down.

As always, the United States is master of its own fate to a much greater extent than any other country on earth, even in the turbulent and unpredictable Middle East. 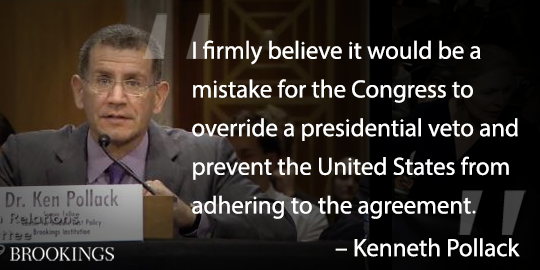 You can watch video of the full hearing here or read the full text of my prepared written testimony here.

Oman: First Arab leader to Washington in 1938, and due for another visit