The Syrian uprising began four years ago. On Sunday, thanks to the Korber Foundation, I was able to make a brief visit to Zaatari Refugee Camp outside Amman, Jordan. Established two years ago, Zaatari is now no longer a short-term shelter for those fleeing the butchery of the Assad regime—it has become a long-term residence for over 85,000 Syrians—a small town with two supermarkets, thousands of tiny resident-run shops, with water and sewage pipes being laid. The planning for Zaatari’s shift to semi-permanence reflects the longevity of this horrible war and the sad reality that, with half of Syria’s population displaced, even an immediate end to conflict would not bring the immediate return of refugees to their homes.

The government of Jordan and UNHCR (the U.N. refugee agency), which jointly manage the camp, have begun to shift from emergency assistance to building the economic and social infrastructure for long-term residency. Helping refugees find jobs and start businesses within the camp is cheaper, the U.N. notes, than providing humanitarian assistance—and with the conflict raging on, it’s increasingly crucial for younger men in the camp to find some means of making ends meet, lest they be tempted to return to Syria by militias offering cash to fighters. Moreover, long-term residency demands attention to dignity—a word the U.N. staff use frequently. Thus, providing food aid through debit cards residents can use to buy goods at a supermarket is better than handing out sacks of rice—enabling greater independence and more choice for camp residents and returning a sense of normality to lives upended by violence.

For similar reasons, the U.N. encourages residents to volunteer to help war-wounded residents, and supports local committees that meet every week to discuss political issues and express their needs and preferences regarding camp life. At the same time, the Jordanian and U.N. managers of the camp discourage any explicitly political activity that might import Syria’s bitter conflict to Jordanian territory or “endanger the humanitarian character of the camp,” as one staffer carefully phrased it. 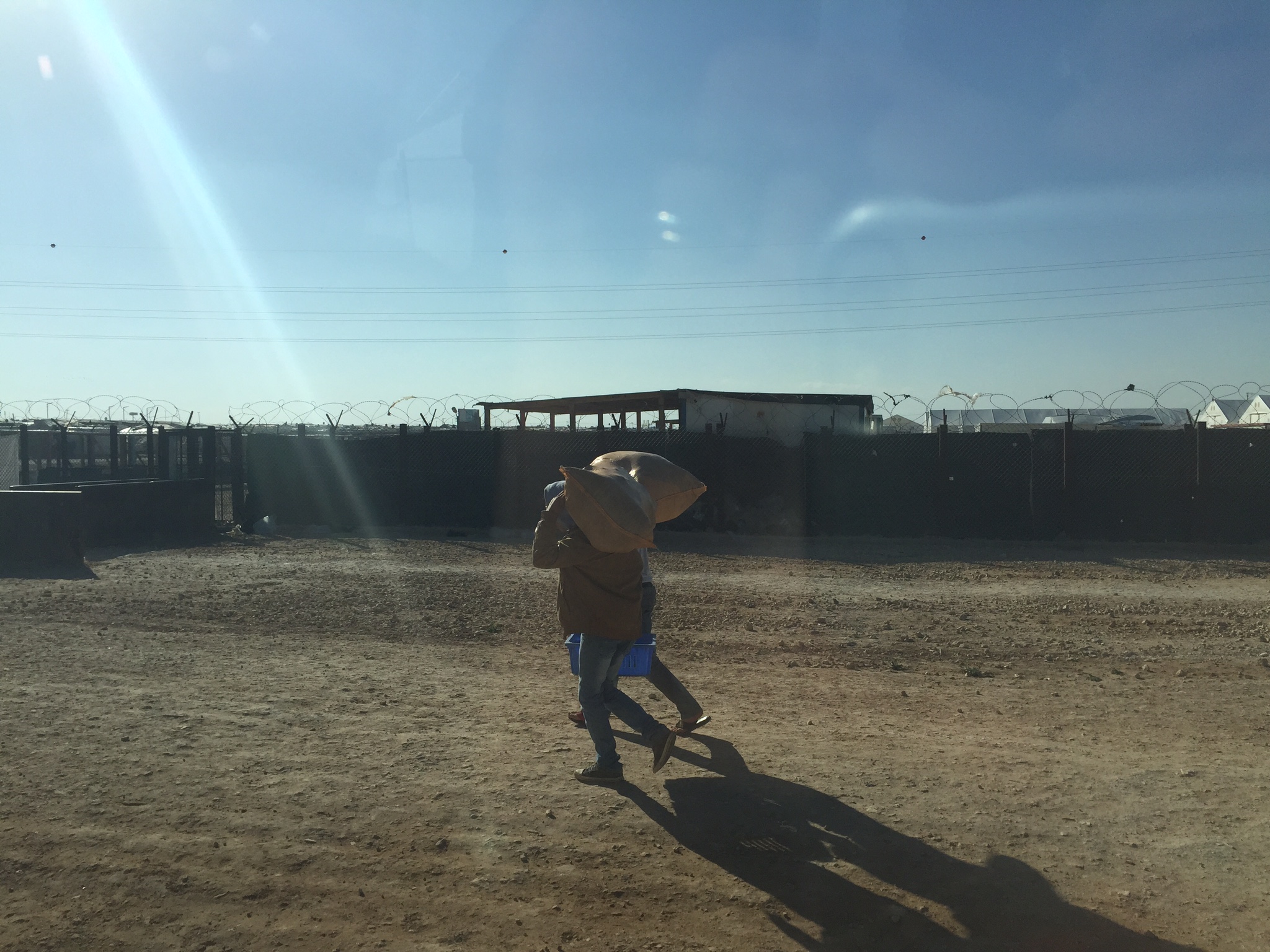 In recent months, the UNHCR and the World Food Programme (WFP) report a number of refugees seeking to move from urban areas into the camp, and a small but steady flow of refugees returning to Syria. They interpret these trends as reflecting increasing financial pressure on refugees in Jordan, the vast majority of whom (85 percent) have been living within local communities, “dispersed within the urban poor,” as the WFP representative put it. Reduced donations for refugee relief have forced the WFP to cut its assistance in recent months, from about $28 per person per month (already not a great sum) to $18 per person per month. WFP knows this amount is insufficient to meet basic needs, but has little alternative. They expect that as support declines, they will see refugees respond in ways that could undermine their well-being—for example, parents pulling children out of school to put them to work or sending them to beg on the streets.

Our delegation met with a group of young adults, men and women, who meet regularly for an informal English class run by one of the many Western NGOs that implement U.N. programs in the camp. Many of these young people were university students in Syria, but fled without degrees or even transcripts of their coursework and qualifications. This cohort is perhaps the most frustrated by the displacement of the war, which interrupted an adulthood that had just begun. Instead of starting careers and families, they are now crowded with parents and younger children into the camp’s tiny caravans, with no hope of finishing their educations or realizing their ambitions. One young man told us, “We live in a virtual world…you eat, sleep, wake, go to work, but you are not alive. If you have no chance to advance your hopes, it’s like you are dead.”

This young generation is the fulcrum on which Syria’s future depends. If they are able to build their education and skills, their ambitions can be put to work for the benefit of their community—today in exile and one day in rebuilding their shattered country. But if they are idle, impoverished, and hopeless, they are ripe for recruiting by militias—especially the ones with the most money—and the war will consume a whole generation of Syria’s people. 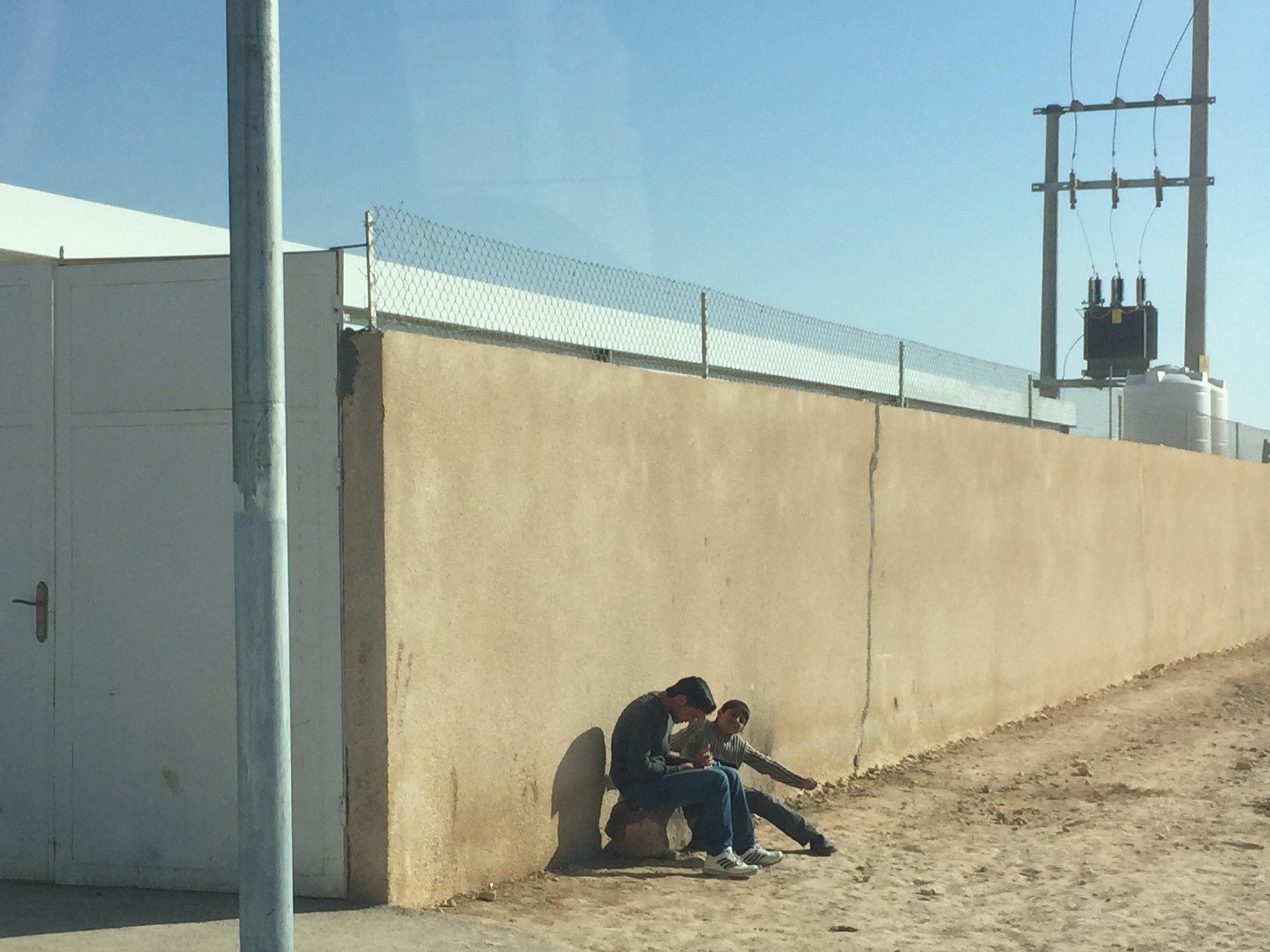 What these young people want more than anything else, they told us, is to get a university education. International donors offer a few scholarships to universities in the region and the West—but these demand a high level of English proficiency, and so only the very best students within the camp have a chance to study at university. Local Jordanian schools are too costly, and ask for documentation the refugees can’t provide.

Distance learning is one opportunity, and the youth we spoke to were eager to try it—but there is little available in Arabic, and the camp’s electricity and internet services are limited and unreliable. One resident suggested that the educated refugees in the camp could themselves be resources for young people who are hungry to learn—but who outside the camp would recognize or certify this kind of informal education? The frustration of the group was evident—they meet often with camp officials and visiting donor groups, they say, and always ask for the same thing, but see no results. Said one, “They keep telling us ‘you’ll go back and rebuild Syria,’ but if we are not educating the next generation, who will rebuild Syria?”

In the meantime, these young men and women practice their English with the cheery NGO workers and try to contribute to their jerry-rigged new community. They put on plays to raise awareness about the dangers of early marriage, and have performed not just for camp residents but also for Sudanese refugees living in Amman. A young man named Yassin summed up the determinedly positive attitude of this group: “Every day we wake up with the hope we’ll go back to Syria, but we think we’ll be here awhile and so we have to keep focusing on building what we have here. Every morning my four-year-old asks if we are going back to Syria today.”