Even before U.S. Speaker of the House John Boehner (R-Ohio) invited Prime Minister Benjamin Netanyahu to speak before Congress, Democrats, unlike Republicans and Independents, were divided in their opinions about the Israeli leader, holding only slightly favorable views according to a poll conducted in November. But a new poll conducted jointly with the Program for Public Consultations and fielded by the research firm GfK in late February among a nationally representative panel of 710 Americans reveals that the partisan divide on Netanyahu is expanding sharply.

As in November, the recent poll asked respondents about their attitudes toward Netanyahu. Then, the poll asked about his divisive upcoming speech to the U.S. Congress on Tuesday, March 3. As usual, a large segment of the public remains neutral towards him. But among those who feel one way or the other, the views held by Democrats and Independents have grown less favorable, while those of Republicans have become only slightly more favorable (within the 4 percent margin of error). 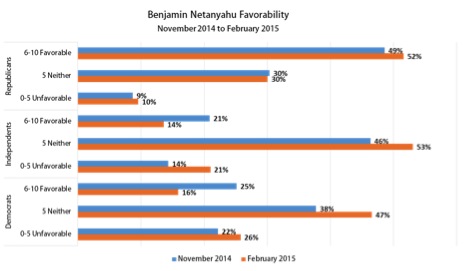 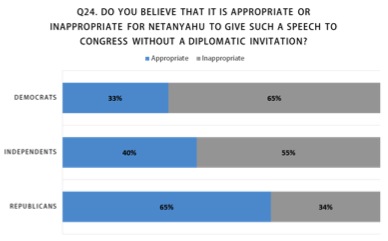 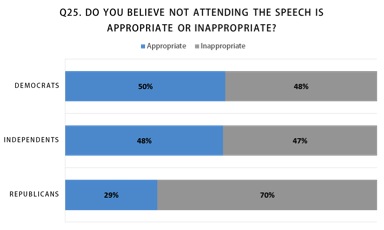 The problem for Netanyahu is that this issue goes far beyond his popularity among Americans. The controversy is inevitably drawing attention to a trend developing among the grassroots of American politics: support for Israel has been broadly declining among Democrats and Independents, and increasing among Republicans. In some cases, as revealed in the November poll, the decline has been startling; for the first time, significant segments of the public were equally divided between wanting the United States to lean toward Israel or the Palestinians, with some even wanting Washington to favor the Palestinians. In particular, slightly more young Democrats (those under 30) want the United States to lean toward the Palestinians than the Israelis. Hispanic Americans, another expanding segment of the Democratic Party, are evenly divided.

On key issues, Americans, especially Democrats, support positions at odds with both Israel and a majority of people in Congress. A majority of Americans, for instance, don’t want the United States to veto a U.N. resolution declaring a Palestinian state. Most Americans are also opposed to Israeli settlements in the West Bank. In the absence of a two-state solution, most Americans — and 84 percent of Democrats — favor a democratic Israel, even one that ceases to be a Jewish state, over a Jewish state that doesn’t grant Palestinians equal rights. These positions, strongly held among Democrats and Independents, have not yet reverberated in Congress: members have been taking positions on these issues that differ from the views of their constituents, in large part because these issues are not priorities for constituents. But the high-profile confrontation over Netanyahu’s speech could potentially turn Israel into a controversial issue in the upcoming Democratic congressional primaries.

What Netanyahu says in his speech will certainly matter. But it’s unlikely that it will change the debate on the Iran issue, or change the minds of Democrats and Independents who are growing to dislike him. On Iran, previous polls have shown that Americans favor a negotiated deal. In the lead up to his speech, the Israeli prime minister’s office has been highlighting the dangers of a deal with Iran that would allow it to enrich uranium at any level. But this argument has been vetted by simulation surveys in the past without changing the basic attitudes of those Americans who favor a deal. On the day Netanyahu delivers his speech, my polling partner Steven Kull and I will release a new poll on Iran, which will offer more insight into how Americans think about these very questions.

Another angle that Netanyahu appears to be taking is highlighting the danger a possible deal with Iran poses for Israel’s security — even its very existence. Putting aside that his stance appears to be undermined by a recent spate of leaks, and that even his own intelligence services disagree with his assessment, his argument is unlikely to sway the debate.

Certainly, the American public supports Israel. But when it comes to war and peace involving the United States, its policy choices do not appear to be driven by worries about consequences for its allies. For example, in the November poll, 70 percent of Americans identified the Islamic State as the biggest threat facing the United States in the Middle East, while a mere 12 percent pointed to Iran. Those in the United States most supportive of intervention to counter the Islamic State do not appear to be worried about the threat it poses to its allies: only 7 percent said their position was based on their concern for threats to key allies. Even on the Israel-Palestine conflict itself, only 14 percent said that their position is based on concern for Israeli interests; in comparison, 31 percent said their position is based on human rights.

For these reasons, Netanyahu’s speech is unlikely to sway Democrats or Independents, who may be more focused on the politics of the speech rather than its substance. It may energize Republican opposition to a deal. But that, too, would have more of a polarizing effect on American politics, and is unlikely to sway the balance on the Iran issue — which is why so many Israelis and supporters of Israel have advised that Netanyahu reconsider his plans. The ship has sailed now, though: Bibi is in Washington, and he’s not backing down. He may well win election in a couple weeks and be the next Israeli prime minister, but the consequences of his speech for Israel in American politics may be long lasting.


This piece originally appeared in