The interim nuclear deal between Iran and the P5+1 has generated much opposition from Israeli officials in what’s shaping up as a battle for public opinion and Congressional votes with the Obama administration. If the Netanyahu government was using the high profile rejection as way of a pressuring the administration into a tougher deal by the end of the six month negotiating period, this was certainly not obvious in the intensity of confrontation; at a minimum, this clearly is not a good cop/bad cop arrangement, as the disagreements are pitting each side directly against the other in Congress. But how has all this affected the Israeli public opinion that Netanyahu will ultimately need behind him as he considers his options on Iran?

Over the past two years, I have conducted surveys in Israel on the Iran issue showing that the Israeli public is ambivalent on the Iran issue. There is evidence that the posture the Israeli government has taken on Iran has taken hold, namely, that nuclear Iran is an existential threat. But Israelis seem to be mildly supportive of diplomacy, with Jewish Israelis divided down the middle, and Arab Israelis strongly supporting diplomacy. In a new survey I designed with my colleague Steven Kull, conducted late November and released December 6, we asked a couple of questions about the Iran nuclear issue, although most of the survey was about the Palestinian-Israeli conflict.

One question we asked Israelis was which of two statements was closer to their views on the way to deal with Iran: 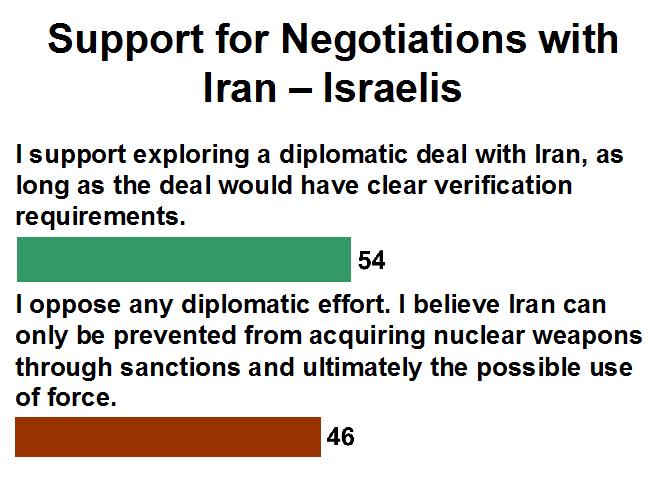 Fifty-four percent of Israelis supported exploring a diplomatic deal, as long as the deal would have clear verification requirements. Of course, the two options are not necessarily mutually exclusive, and some of those arguing for tougher sanctions see them as a mechanism to extract more diplomatic concessions from Iran. However, the tone of the Israeli debate leaves little doubt that it is any realistic deal with Iran that would garner the support of the Israeli government. In part, there is mistrust of Iran. And certainly, the Israelis are using their opposition and anger with Obama as an opportunity to build strategic relations with similarly angry Arab Gulf states. Moreover, the Israeli fear of Iran goes far beyond its nuclear capabilities. The result the new poll suggests that Israeli public is deeply divided on how to deal with Iran despite their government’s high profile tough stand. 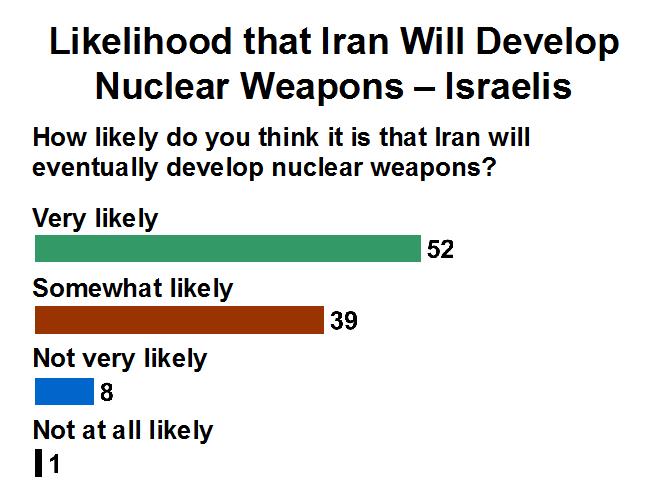 This perception is problematic for Netanyahu for two reasons. If the Israeli public sees Iranian nuclear weapons as inevitable, then why pay the price of war and end up with a nuclear Iran at war with Israel? In the 2012 poll, only 22 percent of Israelis said that a military strike would postpone Iranian nuclear weapons by more than five years, and another 22 percent said it would delay them by more than three.

A second problem is that Netanyahu’s principal success has been to persuade many Israelis that a nuclear Iran would be an existential threat to Israel. In a 2012 poll we conducted, Israelis said they preferred a situation where neither Israel nor Iran had nuclear weapons over one where both had them. This is why a majority of Israelis polled also expressed support for a nuclear-weapons-free zone in the Middle East that includes Israeli disarmament–if it can assure that Iran (and Arab states) would not have nuclear weapons. This is not Netanyahu’s intended outcome.

If Netanyahu had a “secret” answer to Iran’s nuclear potential that was guaranteed success, of course the Israeli public would come around. Success provides all the explanations needed. Given that no one believes this to be the case, the Netanyahu posture is particularly puzzling, whether he wins or loses the battle in Congress. There will come a time, probably soon, when his public will be asking tough questions the answers to which he doesn’t appear to have.