May’s jobs gains, released this morning, show that only 38,000 new jobs were added this May, down from an average of 178,000 over the first four months of the year, and the least new jobs added since September 2010.

I calculate the month-over-month change in total nonfarm payrolls, seasonally adjusted by the 3×9 filter, for the most recent month. The corresponding data as published by the BLS are shown for comparison purposes. According to the alternative seasonal adjustment, the economy actually lost about 4,000 jobs in May (column Wright SA), compared to the official BLS total of 38,000 gained (column BLS Official).

In addition to seasonal effects, abnormal weather can also affect month-to-month fluctuations in job growth. In my paper “Weather-Adjusting Economic Data” I and my coauthor Michael Boldin implement a statistical methodology for adjusting employment data for the effects of deviations in weather from seasonal norms. This is distinct from seasonal adjustment, which only controls for the normal variation in weather across the year. We use several indicators of weather, including temperature and snowfall.

We calculate that weather in May had a negligible effect on employment, bringing up the total by only 4,000 jobs (column Weather Effect). Our weather-adjusted total, therefore, is 34,000 jobs added for May (column Boldin-Wright SWA). This is not surprising, given that weather in May was in line with seasonal norms.

Unfortunately, neither the alternative seasonal adjustment, nor the weather adjustment, makes todays jobs report any more hopeful. They make little difference and, if anything, make the picture more gloomy. 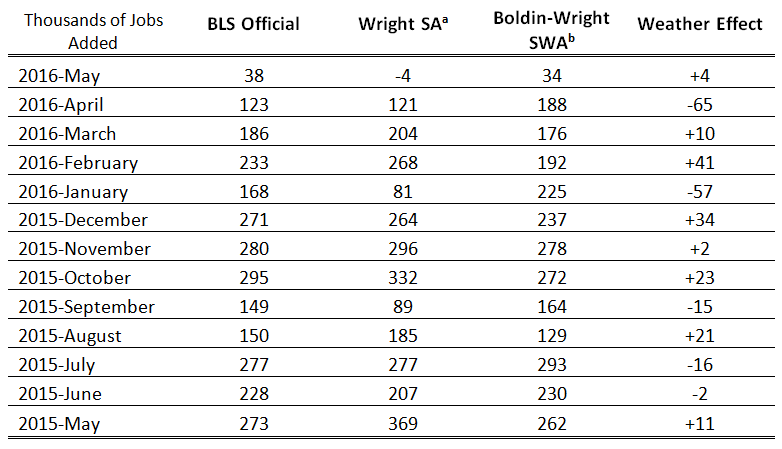 Nine facts about the service sector in the United States