In my paper “
Unseasonal Seasonals?
” I argue that a longer window should be used to estimate seasonal effects. I found that using a different seasonal filter, known as the 3×9 filter, produces better results and more accurate forecasts by emphasizing more years of data. The 3×9 filter spreads weight over the most recent six years in estimating seasonal patterns, which makes them more stable over time than in the current BLS seasonal adjustment method.


I calculate the month-over-month change in total nonfarm payrolls, seasonally adjusted by the 3×9 filter, for the most recent month. The corresponding data as published by the BLS are shown for comparison purposes. According to the alternative seasonal adjustment, the economy gained only 100,000 new jobs last month, compared to the official BLS total of 151,000. Data updates released Friday for prior months also reveal some differences between my figure and the official job gains numbers from prior months, though these discrepancies can for the most part be attributed to the BLS’s updated seasonal adjustment procedure, which I describe in my
previous post
.


In addition to seasonal effects, abnormal weather can also affect month-to-month fluctuations in job growth. In my paper “
Weather Adjusting Economic Data
” I and my coauthor Michael Boldin implement a statistical methodology for adjusting employment data for the effects of deviations in weather from seasonal norms. This is distinct from seasonal adjustment, which only controls for the normal variation in weather across the year. We use several indicators of weather, including temperature and snowfall.


For the month of January, our weather-adjusted estimate of 199,000 new jobs factors out the effects of unusual weather, which we estimate were roughly 48,000 new jobs. As mentioned in my
previous post
, this estimate is not affected by the unusually large snowstorm that hit the Northeast on January 21-23, since the
BLS defines a person as being employed if he or she works at any stage in the pay-period bracketing the 12th of the month. The effect of the weather estimated today is larger than what I estimated initially in my
previous post
, 48,000 jobs compared to 25,000. 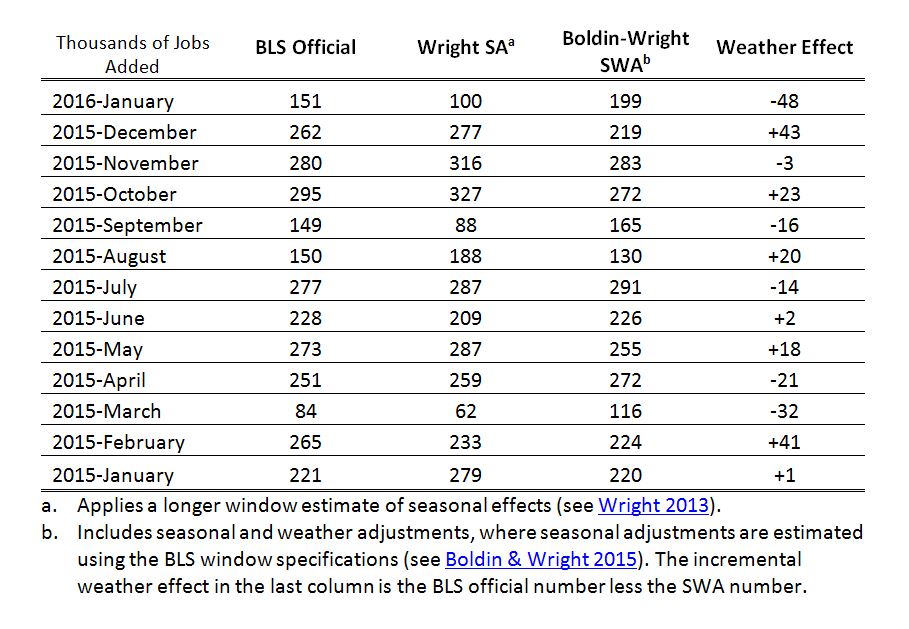 Black Lives Matter and the anti-racist movement in France

"One thing that tech companies can do [to support LGBTQ+ individuals in the tech field] is to declare that they will not tolerate discrimination of any kind."