The unemployment numbers for June were slightly higher than expected as of last month’s forecast, because of an unexpected, but likely transitory, increase in workers’ job separation rate, and the contour of the forecast for July is broadly unchanged compared to last month. The anticipated decline in unemployment is however slightly weaker because of disappointing news on both the job openings and unemployment insurance claims front that the model carries forward. 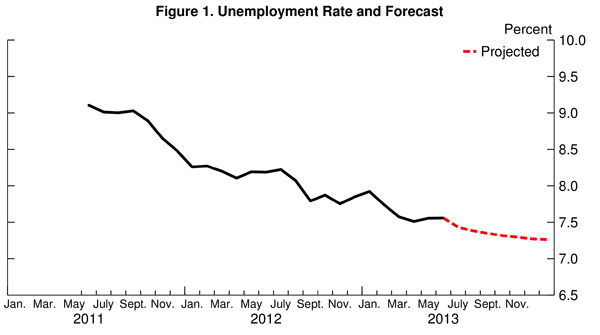 In April, the unemployment rate remained flat at 7.6%, while the model anticipated a 0.1 ppt drop (to 7.5%, see Table 1). This surprise was due to an unexpected increase in the job separation rate (figure 3) that the model sees as transitory. The contour of the forecast is broadly unchanged compared to last month, although the model now anticipates a slower labor market recovery: the jobless rate is now projected to reach 7.3% by December 2013, a somewhat higher level than the 7.1% expected as of last month’s forecast (Figure 1). 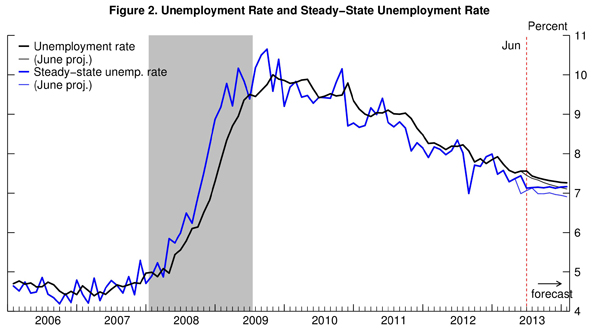 To forecast the behavior of steady-state unemployment (and hence of the actual unemployment rate), the model propagates forward its best estimate for how the flows between employment, unemployment and out-of-the labor force will evolve over time. With disappointing news on the job openings front (job openings increased only marginally in June) and on the unemployment insurance (UI) claims front (the number of new UI claims capturing new layoffs has been essentially flat since April, showing little signs of further decline), the model now anticipates a slower increase in the workers’ job finding rate over the next several months (UE, figure 4) and no decrease in workers’ job separation rate (EU, figure 3). As a result, the decline in the steady-state unemployment rate is thus slower than anticipated in the prior projection. 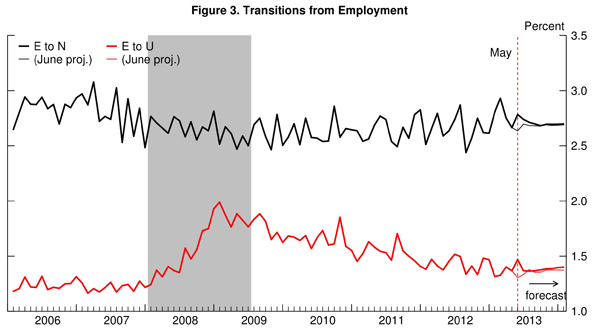 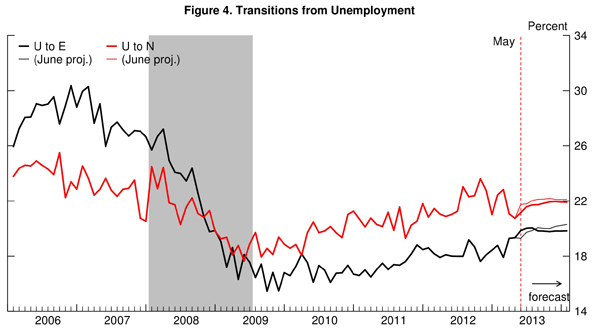