Over the past months, the Barnichon-Nekarda model has been surprised by lower than expected unemployment numbers. Taking the positive news from the March report on board, the model now foresees a faster labor market rebound, and anticipates a rising rate of decline in unemployment over the next six months. I now expect a jobless rate of 7.1% in September 2013, compared to 7.6% as of last month. 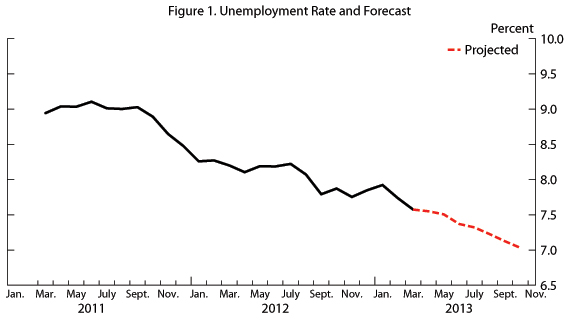 In March, the unemployment rate dropped to 7.6%, noticeably lower than the model’s forecast (7.8%, see Table 1). As was already the case last month, the model was surprised by the rate of improvement in the job separation rate: the EU rate, comprised mostly of layoffs (Figure 2), has been declining faster than anticipated over the past couple months.

Going forward, the model now sees the recent labor market improvements as signaling a faster rebound in the labor market. It now projects a faster decline in unemployment over the next 6 months, with a progressive increase in the rate of decline. In fact, the jobless rate is now projected to reach 7.1 % by September 2013, significantly lower than the 7.6% projected as of last month’s forecast (Figure 1). 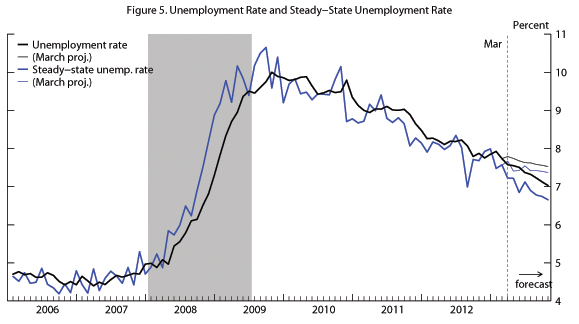 In addition, the model now also foresees a faster decline in the steady-state unemployment rate itself, with a rate of 6.7% in September, significantly lower than the 7.3% anticipated as of last month (Figure 5). The “steady-state convergence dynamic” pushing the unemployment down will gain in strength and generate a rising rate of decline in unemployment.

More specifically, the model propagates forward its best estimate for how the flows between employment, unemployment and out-of-the labor force will evolve over time, and constructs the implications for the steady-state unemployment rate and hence the actual unemployment rate. With continued improvements on the hiring and job separation fronts over the past months, the model now anticipates a markedly faster increase in workers’ job finding rate over the next 6 months (UE, figure 3) and even (for the first time in months) a small decline in the rate of job separation (EU, figure 2). As a result, the steady-state unemployment rate is now projected to decline much faster. 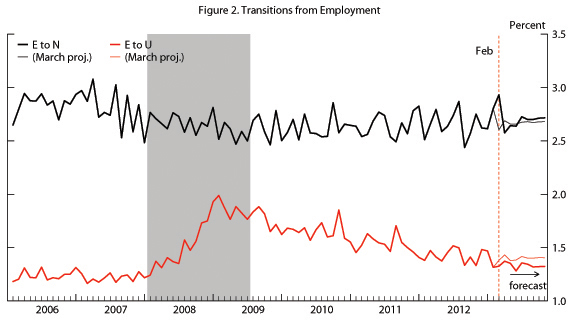 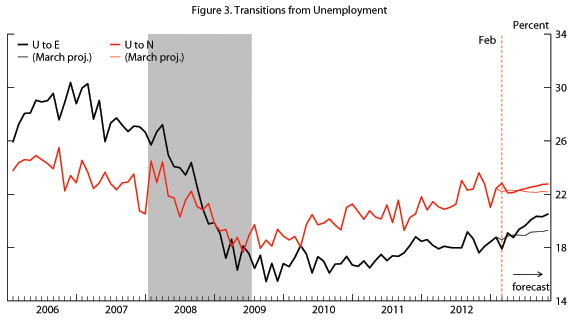 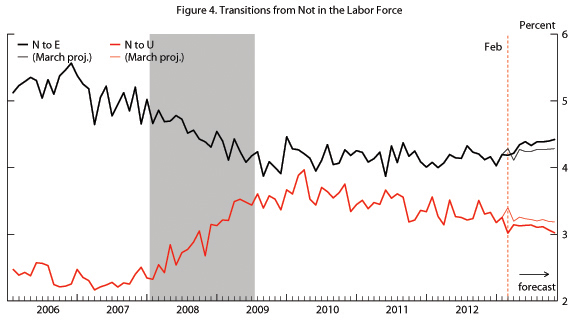 To read more about the underlying model and the evidence that it outperforms other unemployment rate forecasts, see Barnichon and Nekarda 2012 »