The unemployment numbers for February were in line with last month’s forecast: The labor market keeps improving thanks to a slow but steady improvement in hiring. However, progress remains very slow, and I project a jobless rate of 7.8% in March, going down to 7.6% by September 2013. 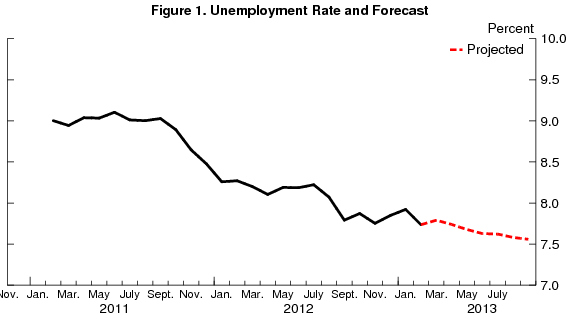 In February, the unemployment rate was 0.2 percentage point lower than in January, in line with my February forecast (see Table 1), but the decline was a little faster than anticipated. This is mostly due to a stronger than expected decline in the rate of job separation (the EU rate, comprised mostly of layoffs), as can be seen in Figure 2.

Going forward, the model sees that stronger decline in layoffs as transitory, and I anticipate the unemployment rate to tick back up slightly to 7.8% in March (specifically, from 7.74%, rounded to 7.7% in February, to 7.79%, rounded to 7.8% in March), reversing some of the gains on the layoff front. Thereafter, improvements in the labor market will continue, albeit at a slightly slower pace than anticipated in February, and I project the unemployment rate to decline slowly over the next 6 months to reach 7.6 % by September 2013. 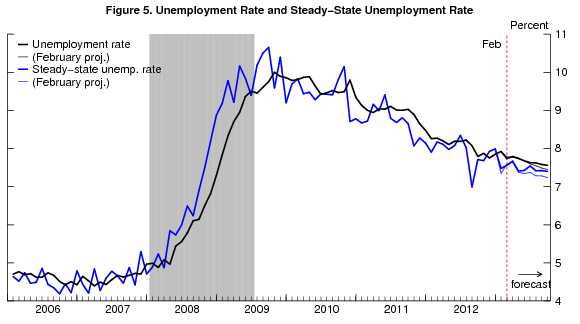 Over the next six months, the model propagates forward its best estimate for how the flows between employment, unemployment and out-of-the labor force will evolve over time, and constructs the implications for the steady-state unemployment rate and hence the actual unemployment rate. In February, job openings decreased, indicating a possible moderation in the (already slow) pace of hiring. Taking this new information on board, and compared to February, the model now predicts an even slower increase in workers’ job finding rates (figure 3) over the next 6 months. As a result, the steady-state unemployment rate is now projected to decline to only 7.4% by September 2013, instead of 7.2% in my February forecast, implying a slower decline in the actual unemployment rate.

Finally, let me end this post with a few words of congratulation for the model’s remarkable performance over the past 6 months: Back in October, for the first update of this series of monthly forecasts, the model predicted that “Unemployment [was] Likely to Stay Around 7.8% for Six Months,” and this is exactly what happened. Of course, this need not always be the case, but this is a notable achievement that speaks for the potential of this new approach to forecasting unemployment. 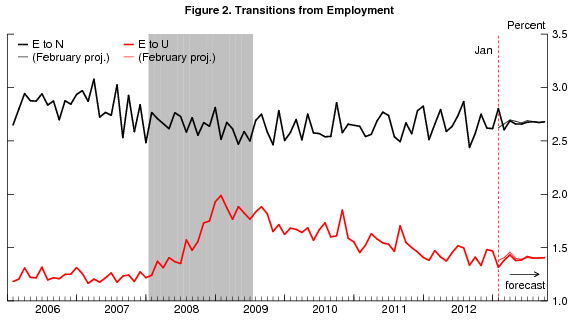 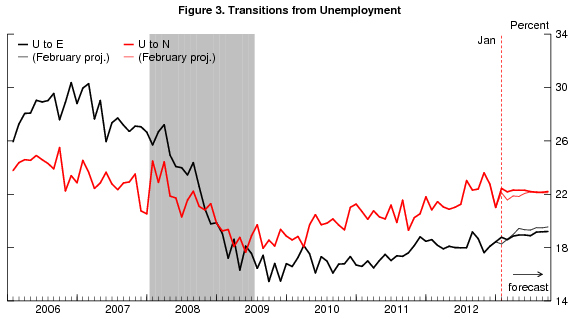