The November employment report showed small upticks in both the unemployment rate and the labor force participation rate. These numbers were in line with last month’s forecast and confirmed my assessment of recent developments in the labor market:  the labor market is slowly improving, driven mostly by a slow increase in hiring. However, the separation rate is still significantly above its pre-recession level, and I do not expect any improvement on this front. Given the slow improvement in hiring and the elevated rate of job separation, I forecast the unemployment rate to remain close to its current level over the next six months. 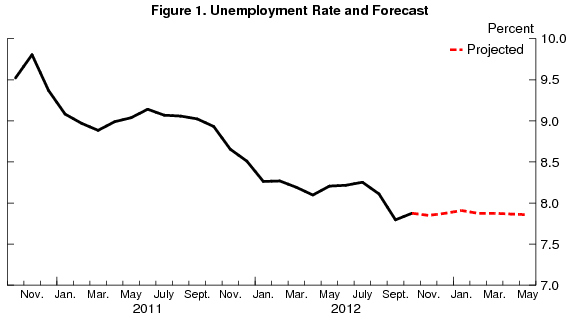 This post discusses my monthly update of the Barnichon-Nekarda model.  For an introduction to the basic concepts used in this post, read my introductory post. (Full details are available here.)

The unemployment rate in October was 7.9 percent, an increase of 0.1 percentage point from September.  As you can see in Table 1, this increase was very close (within rounding error) of my previous forecast. Consequently, my assessment of the labor market is little changed from last month.

Digging into the underlying flows—shown in figures 2 through 4 (thick lines)—the slight uptick reflects the labor market partially reversing some of the September gains. This is exactly what the model expected last month: the surprisingly low unemployment rate in September was mostly due to an unexpectedly strong (but transitory) increase in the job finding rate, and an unexpectedly strong (and equally transitory) decrease in job separations. Both the job finding rate and the job separation rate partially reversed those gains, and the unemployment is now a little higher. The slight uptick in the labor force participation was more of a surprise. As shown in Figure 4, more persons who had previously not been in the labor force entered it—but did not immediately find jobs—which pushed up the labor force participation rate. 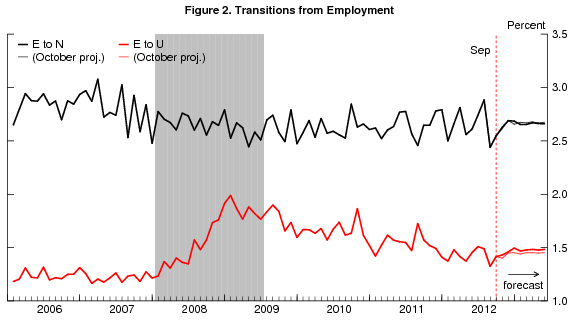 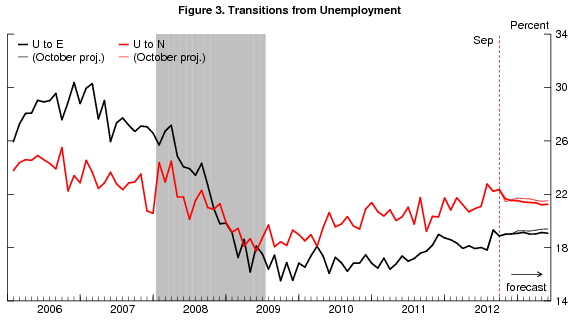 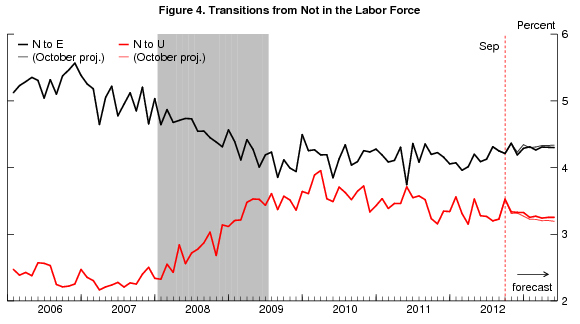 More precisely, the model propagates forward its best estimate for how the flows between employment, unemployment and out-of-the labor force will evolve over time, and constructs the implications for the unemployment rate. The model’s reading of today’s report is the same as last month: As shown in figures 2 and 3, the model continues to anticipate a slow recovery in the labor market coming from a slow increase in workers’ job finding. However, the model continues to see an elevated rate of job separation over the forecast horizon (Figure 3). Although the separation rate is significantly above its pre-recession level, the model does not expect any improvement on this front, and this prevents the unemployment rate from declining. 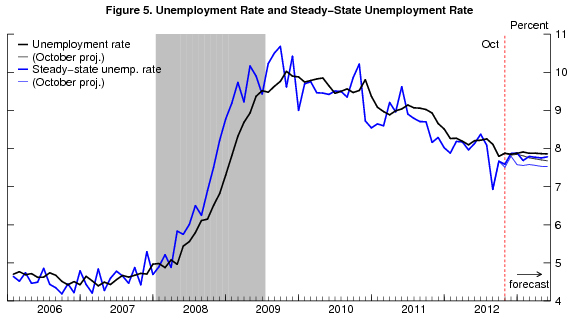