According to today’s employment report, the unemployment rate dropped to 7.8 percent in September, falling below 8 percent for the first time since January 2009. Furthermore, the share of working-age Americans who are employed increased to 58.7 percent, the highest level since May 2010. Employers added 114,000 jobs last month, and an average of more than 145,000 over the past three months, roughly the same pace of job growth experienced over 2011 and 2012. (These figures do not reflect the anticipated update to the payroll data, which will be official in February and is expected to show that the level of employment was 386,000 jobs higher in March 2012 than previously reported.)

As America continues its recovery from the Great Recession, there is an ongoing debate in the media and among policymakers about the value of a college degree in today’s economic climate. One issue that is receiving a significant amount of attention is the rising cost of college. Indeed, tuition has increased by almost 50 percent in the last 30 years, prompting some people to ask whether college is still worth the price of admission.

In this month’s analysis, The Hamilton Project confirms its previous findings that the returns to college attendance are much higher than other investments, such as stocks, bonds, and real estate. We also find that the returns to college have been largely constant over the last 35 years, indicating that the rising tuition costs have been offset by the increased earnings premium for college graduates. Finally, we continue to explore the nation’s “jobs gap,” or the number of jobs that the U.S. economy needs to create in order to return to pre-recession employment levels.

The Value and Cost of a College Degree

In most respects, a college degree has never been more valuable. As highlighted in a recent Hamilton Project piece, recent college graduates earn more money and have an easier time finding employment than their peers who only have a high school diploma. What may be less intuitive is that these gaps have been growing in recent years. As the graph below illustrates, a young college graduate earned about $4,000 more per year in the 1980s, adjusting for inflation, than someone of the same age who did not attend college (averaged across the entire population, not just those in the workforce). Over the last three decades, that figure has climbed to $12,000 per year.

Differences in employment rates between college graduates and non-graduates have not demonstrated as clear of a trend over this period, with one key exception. In recent years—particularly in the aftermath of the Great Recession—college has become an increasingly important determinant of one’s employment status. Today, a college graduate is almost 20 percentage points more likely to be employed than someone with only a high school diploma. This “employment gap” between college and high school graduates is the largest in our nation’s history. What’s more, these figures include all individuals between the ages of 23 and 25, even those college graduates who are not employed because they are pursuing advanced degrees. If these individuals were excluded from the calculations, these differences would likely be even starker. 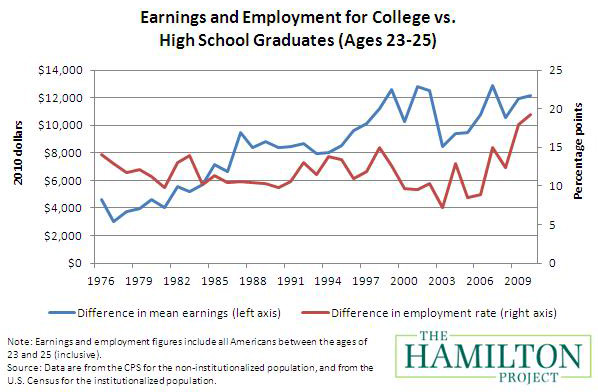 While the evidence is clear about the lifelong value of more education, skeptics are increasingly pointing to rising tuition costs to claim that college is not as sound of an investment as it once was. And it is true that tuition has increased significantly over the past few decades. In 1980, it cost an average of about $56,000 (adjusting for inflation) to attend a university for four years. This figure includes tuition, fees, and the “opportunity cost,” or income one foregoes to attend school instead of holding a job. (This figure excludes room and board: one must eat and sleep whether she is in college or not.) In 2010, four years of college cost more than $82,000, a nearly 50 percent increase over that 30-year period.

This increase in tuition is based on calculations from the National Center for Education Statistics but it may overstate the rise in the costs of college. First, this rise in tuition does not account for recent increases in financial aid. Thus, while the sticker price of college may have gone up, it is unclear to what extent the cost to students and their families has increased. Indeed, according to the College Board, the actual cost of a four-year degree has remained relatively constant over the last 15 years.

Regardless of the magnitude of the exact increase in tuition, a sole focus on the cost of college is misleading because it only tells half of the story. Specifically, the monetary benefits of a college degree have increased dramatically over the last few decades. An individual who entered college in 1980 could expect to earn about $260,000 more over the course of her life compared to someone who received only a high school diploma. In contrast, for someone starting college in 2010, the expected lifetime increase in earnings relative to a high school graduate was more than $450,000. These estimates are adjusted both for inflation and the fact that most of this additional income will come much later in a graduate’s life, and the calculations are described in more detail here.

Even if we assume that all students actually pay tuition at the published rates, the bottom line is this: while college may be 50 percent more expensive now than it was 30 years ago, the increase to lifetime earnings that a college degree brings is 75 percent higher. In short, the cost of college is growing, but the benefits of college—and, by extension, the cost of not going to college—are growing even faster. 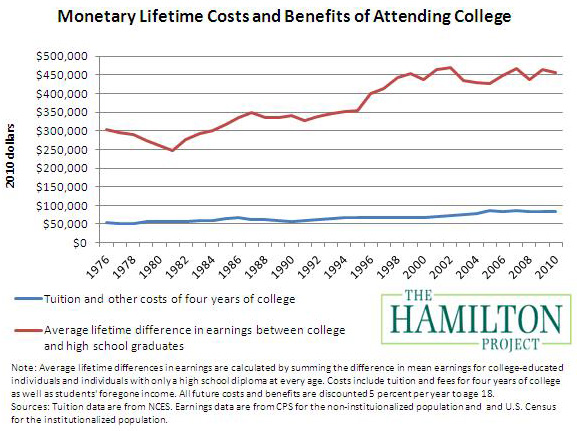 The returns to an investment in a college education, therefore, are high. In a previous post, The Hamilton Project estimated that investing in a four-year degree yields a return of above 15 percent. While this is down slightly from almost 18 percent in the late ’90s, attending college remains one of the best ways one can invest her money. The return to college is more than double the average return over the last 60 years experienced in the stock market (6.8 percent), and more than five times the return to investments in corporate bonds (2.9 percent), gold (2.3 percent), long-term government bonds (2.2 percent), or housing (0.4 percent).

As the graph below demonstrates, the claim that college is no longer a sound investment is not rooted in fact. The rate of return has remained relatively constant over the last three decades. If attending college was a good idea in the ’80s, it’s still a good idea today. 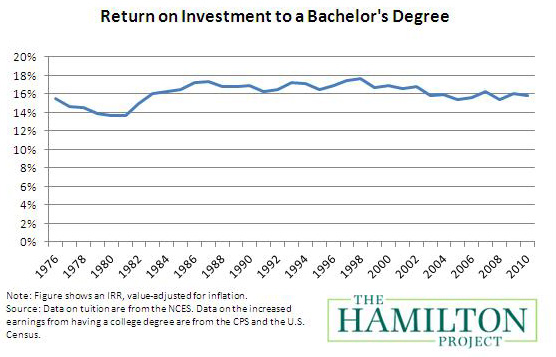 The cost of college can be daunting for many families, but it is precisely because college is such a sound investment that there is an important role for government to ensure that loan programs are plentiful and accessible. The nation and the economy are strengthened when college attendance is determined by students’ abilities, not their families’ financial background. Indeed, it is not just the direct recipients of these loans that benefit from the increased number of Americans who are able to go to college. One recent study showed that even individuals with only a high school diploma earn more when they live in cities populated with more college graduates. More education is not just good for individuals; it’s a good investment for the broader community.

As of September, our nation faces a “jobs gap” of 11.2 million jobs. The chart below shows how the jobs gap has evolved since the start of the Great Recession in December 2007, and how long it will take to close under different assumptions of job growth. The solid line shows the net number of jobs lost since the Great Recession began. The broken lines track how long it will take to close the jobs gap under alternative assumptions about the rate of job creation going forward. 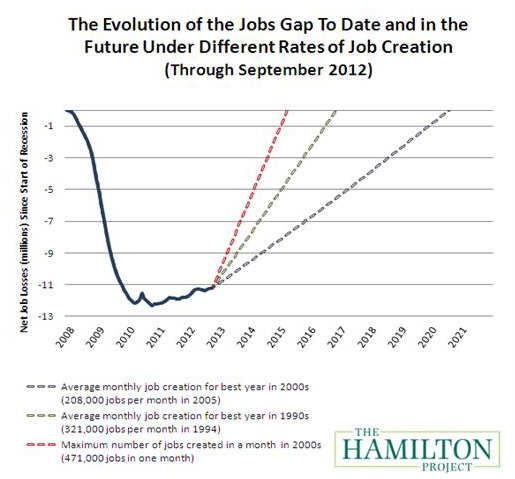 While rising student debt and payments to colleges are a cause for concern, we have found that college is still one of the best investments an individual can make. Ensuring that all students have access to this investment requires both a commitment to making it financially feasible at all income levels and a productive K-12 system that prepares students for the next level of education. A recent Hamilton Project event highlighted three new proposals for improving student attainment and achievement in our nation’s K-12 system. In the spring of 2013, The Hamilton Project will hold a forum to discuss policy proposals for improving access to post-secondary education for all Americans.