Today’s employment report suggested slowing employment gains and is sure to disappoint observers hoping for greater strength in the labor market. Employers added just 69,000 jobs in May and estimates of job gains in March and April were revised lower. In addition, the unemployment rate ticked up from 8.1 percent in April to 8.2 percent in May. On top of the 12.7 million unemployed, according to the Bureau of Labor Statistics, there are approximately 2.4 million people not in the labor force who want to work, and have looked for a job sometime in the prior 12 months.

Employment increased in health care, transportation and warehousing, and wholesale trade. In addition, one industry that has experienced considerable jobs growth since 2007 is the oil and gas industry, which has expanded rapidly in the wake of new technological innovations over the last few years. In particular, hydraulic fracturing—or “fracking”—and other new extraction methods have increased sharply the domestic supplies of natural gas and petroleum.

In past months, The Hamilton Project has examined trends in employment throughout the Great Recession and the recovery. This month, in advance of The Hamilton Project’s June 13th energy forum at Stanford University, we explore what increased domestic gas and oil production means for America’s households and businesses, the environment, and employment. We also continue to update our analysis of the “jobs gap,” or the number of jobs that the U.S. economy needs to create in order to return to pre-recession employment levels.

In recent years, hydraulic fracturing and horizontal drilling techniques have enabled the recovery of natural gas reserves that were previously thought to be too difficult or costly to access. These new techniques led domestic shale gas production to increase by nearly 50 percent between 2008 and 2009 alone. Largely as a result of this shale revolution, total U.S. natural gas production jumped from 18.5 trillion cubic feet in 2006 to 23 trillion cubic feet in 2011 (Energy Information Agency 2012).

This increased production has had a major impact on the price of natural gas. The figure below shows historical average residential prices of natural gas in the United States—that is, natural gas mainly used for home heating and water heating—as well as the future natural gas prices that were expected in 2008 (in blue) and in 2012 (in red). Between 2009 and 2011, natural gas prices were, on average, approximately $2.08 per million Btu lower than they had been projected to be in 2008. The average U.S. household saved roughly $75 in 2009, $91 in 2010, and $107 in 2011 on its heating bills. From 2012 to 2020, the average American household is expected to save approximately $73 per year. In total, the lower natural gas prices are projected to save households $109.5 billion between 2009 and 2020.

And these savings are just part of the benefits to the overall economy. In particular, they do not account for households’ savings resulting from lower electricity prices; natural gas comprises approximately 20 percent of electricity consumption—a share which is projected to increase. Furthermore, they do not account for the savings that accrue to businesses, especially heavy industries and manufacturers that rely on energy to power their operations. Lower natural gas prices present an opportunity for households and businesses to decrease their energy costs considerably. 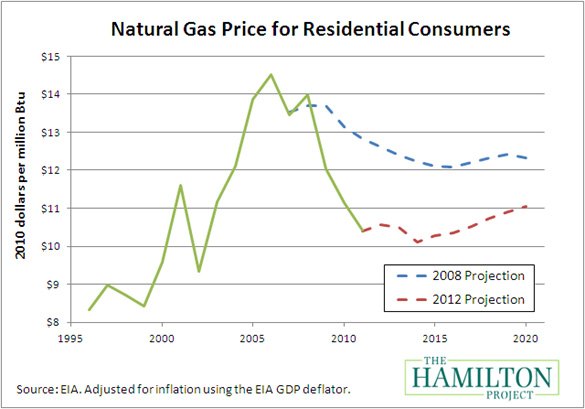 The use of natural gas also contributes far less to climate change and other environmental problems than does the use of coal, which is why natural gas is often referred to as a “bridge” to a clean energy future. While these are positives, the local environmental damages caused by fracking are not yet fully understood and are a cause for current debate and research. It is critical that regulations protect affected communities so that the long-run opportunities from these new natural gas supplies are realized in a socially responsible manner.

The Employment Benefits of Increased Gas and Oil Production

Overall, the increased recovery of natural gas and petroleum in the United States has been beneficial for domestic economic activity. Between 2007 and 2011, employment in oil and gas extraction increased by 28,000. Furthermore, employment increased by an additional 45,000 jobs in mining support activities. During this period of economic recovery, these jobs have also boosted employment in a wide variety of other industries that likely add up to tens of thousands of additional jobs, although there is not a consensus on how to best estimate these indirect employment gains. 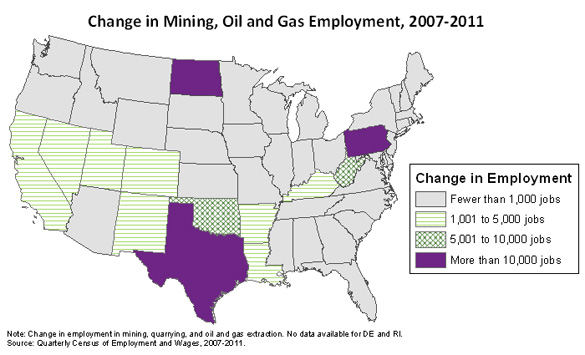 This employment growth has occurred predominately in states with shale gas reserves (see the figure above). More specifically, in the eleven states that encompass nearly all proven shale reserves, employment in mining and logging has increased 15 percent since 2007, while declining in the rest of the country. States like North Dakota, Pennsylvania, and West Virginia, which saw some of the largest increases in proven reserves, have also had some of the most remarkable employment growth. For instance, employment in mining nearly tripled in North Dakota and increased 59 percent in Pennsylvania and 17 percent in West Virginia. While certainly not a panacea for economic recovery, expanded production in the oil and gas industry has played a positive role in creating much-needed jobs for families and states impacted by the recession.

As of May, our nation faces a “jobs gap” of 11.3 million jobs. The chart below, which reflects our updated assumptions about labor force growth, shows how the jobs gap has evolved since the start of the Great Recession in December 2007, and how long it will take to close under different assumptions for job growth. The solid line shows the net number of jobs lost since the Great Recession began. The broken lines track how long it will take to close the jobs gap under alternative assumptions about the rate of job creation going forward. 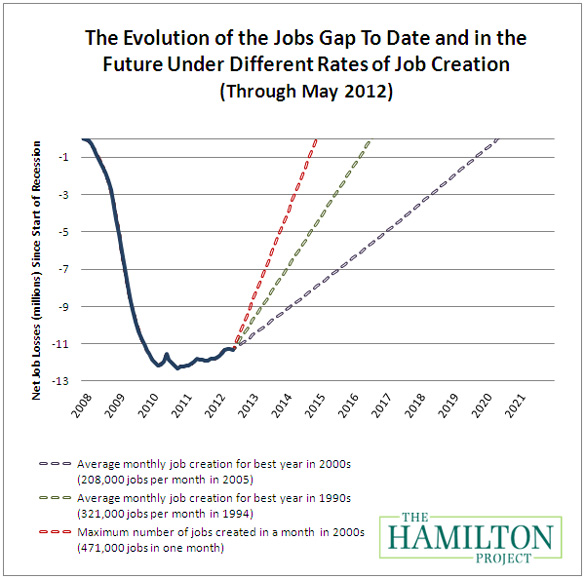 New technologies always create uncertainty. It is impossible to predict perfectly how the increase in U.S. natural gas and oil production will impact the domestic energy sector, global affairs, and the environment. On June 13th The Hamilton Project will hold a half-day forum at Stanford University to stimulate a discussion around the future of U.S. energy policy and to explore these critical issues.

As part of the event, The Hamilton Project will release three policy proposals focusing on new approaches to modernizing bonding requirements for natural gas producers; opportunities to promote natural gas in the transportation sector; and an analysis indicating that the U.S. should not restrict exports of natural gas.

For more information or to register for the event, click here. The new policy proposals will be available on The Hamilton Project website (www.hamiltonproject.org) on June 13th at 9:00 a.m. ET.