Today’s employment report showed continued growth in the labor market, although at a slower pace than over the previous four months. Furthermore, the unemployment rate ticked down from 8.3 percent to 8.2 percent in March. The economy has now produced positive jobs growth for the last eighteen months. Employer payrolls increased by 120,000 jobs in March, with manufacturing and health care posting large gains.

In past months, The Hamilton Project has examined employment trends over the last several years, as the Great Recession has taken its toll on many Americans across various segments of the population. This month, in honor of tax day, we explore how the current labor market has impacted one area affecting all Americans: taxes and, more specifically, who pays them.  We also continue to explore the nation’s “jobs gap.”

The positive signs of economic growth over the past several months are good news for policymakers and the American people. Inside the DC Beltway, however, there has been a renewed focus on the nation’s burgeoning deficit, and renewed calls to reform the tax system in ways that create more efficiency and, potentially, additional revenue. Congressional leaders are at a partisan standstill, with many misconceptions around the current tax system complicating the debate.

A popular myth swirling around Washington, DC, and throughout the media these days is that many Americans do not pay taxes, and are therefore free-riding off of our society without contributing themselves. This has even been referred to by some as a “new orthodoxy.” The origin of this misconception is the observation that only about 54 percent of American households paid federal income taxes during recession-affected 2011. But that statistic is misleading because it provides an incomplete picture of the overall tax burden on American families, and because it incorporates individuals who naturally shouldn’t be paying taxes because of their age or economic circumstances due to the Recession. A closer look reveals that nearly all Americans do, in fact, pay taxes.

To help illustrate this point, let’s start with some basic fiscal background. Over the last two decades, tax credits for low-income working families with children, like the Earned Income Tax Credit (EITC) and the Child Tax Credit (CTC), have indeed decreased the number of American households paying federal income taxes. These credits reduce or eliminate income tax liabilities and sometimes result in a net income tax refund for low-income families.

But these credits are also an important component of the progressive tax system that help offset the burden of other taxes and raise poor working families out of poverty. Credits like the EITC and CTC have helped to reduce poverty, provide economic security, and offset declining labor-market opportunities for low-income workers. The EITC alone is responsible for raising 6.6 million children out of poverty. Perhaps most importantly, these credits expand the number of people contributing to the economy by causing many additional Americans to participate in the labor force and causing others to work more hours.

As shown in the figure below, after incorporating payroll taxes, the proportion of American households who paid federal taxes in 2007, a non-recession year, jumps to 78 percent. 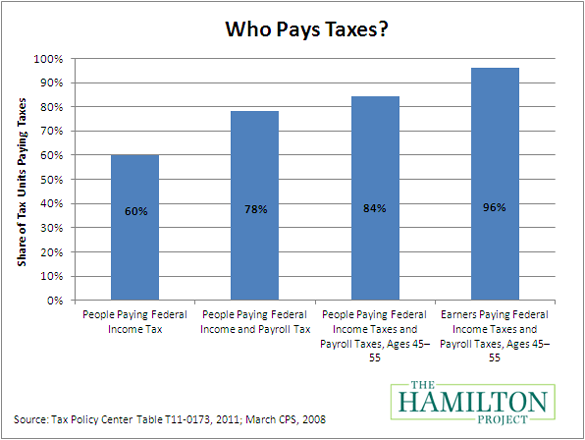 But, when we take the data a step further, even this statistic is misleading because it counts older households, who are often retirees, and young individuals, even if they are still in school. In fact, many households with no tax liability are young or old, meaning that they are likely to be led by students who subsequently will pay taxes or retirees who paid taxes over their lifetimes. The figure below illustrates the relationship between age and the odds of paying payroll and income taxes. The graph makes clear that younger individuals—those in their late teens and early 20s—pay taxes at relatively low rates, but that is largely because they are in school and not working.  But as they get older and find jobs, the evidence suggests that they will pay taxes. Similarly, after age 60, when more and more Americans are retiring and leaving the labor force, the fraction paying taxes falls rapidly. These retirees have certainly contributed to America’s revenue stream over their lifetimes. To this point, as the U.S. population ages into the future and a greater proportion of Americans reach the retirement age, it is inevitable that a growing percentage of the overall population will pay no income or payroll taxes. 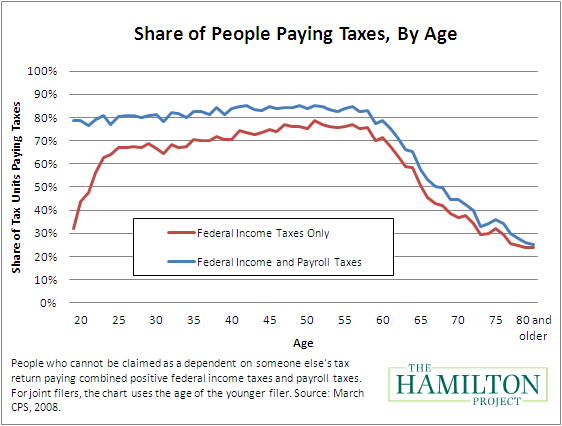 But during middle age, almost all workers face a tax burden. When looking at those in middle-age, 84 percent faced a net payroll and income tax bill in 2007. This general theme also holds true for low-income households: even households that receive the child-related EITC generally only receive it temporarily, usually when their children are young. On net, even these families face a positive tax bill over time (Dowd and Horowitz 2008).

Furthermore, rising unemployment during the Great Recession has meant that the proportion of American families paying no federal taxes is unusually large today. Unemployed workers without incomes naturally don’t face tax liabilities. But as they find jobs and rejoin the labor force, they will once again contribute to the federal system. Indeed, some of the trends we see today are less illustrative of an unfair tax advantage for the poor; rather, the trends indicate the existence of a group of unfortunate families who have found themselves affected by hard times. And young people today have been particularly hard hit: many are unemployed or weathering the storm in graduate schools, meaning that they are, thus, not paying taxes. When looking more specifically at middle-aged workers with jobs, 96 percent paid federal income or payroll taxes.

Other Forms of Taxes Also Count

Finally, incorporating the additional—and significant—other forms of taxation into our calculation leads to the conclusion that nearly 100 percent of Americans pay taxes in some way, shape or form. All consumers bear the burden of state and local property, sales, and income taxes, as well as excise taxes on items like gasoline, alcohol, or cigarettes. These other taxes tend to be regressive, imposing more of a burden on low-income families than on high-income families—the state and local tax burden is over twice as large as the federal tax burden for the bottom fifth of households (Citizens for Tax Justice 2011). When you fill up your car with gasoline, you can’t avoid paying the tax. The pump does not differentiate between the richest Americans and the poorest families.

As of March, our nation faces a “jobs gap” of 11.3 million jobs.  The chart below, which reflects our updated assumptions about labor force growth, shows how the jobs gap has evolved since the start of the Great Recession in December 2007, and how long it will take to close under different assumptions for job growth. The solid line shows the net number of jobs lost since the Great Recession began. The broken lines track how long it will take to close the jobs gap under alternative assumptions about the rate of job creation going forward. 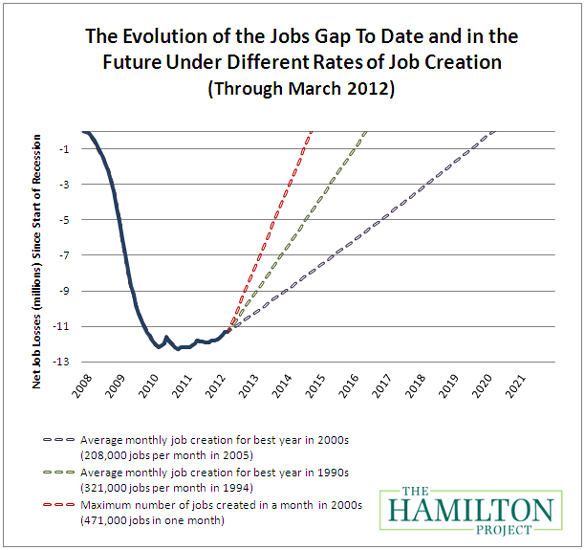 Virtually all Americans will pay taxes during their lifetime. The uncertainty that came packaged with the Great Recession has allowed for the proliferation of many other economic misconceptions, especially in regard to taxes. Today’s economic context for tax reform is very complex. Most immediately, the economy is still in the midst of a slow recovery with an unemployment rate that remains too high.  Even with robust rates of job growth, it will take years to close the jobs gap. An important role of fiscal policy in the near term is to support recovery in the labor market.

And in the longer-run, the United States is contending with three economic problems: a daunting outlook for budget deficit that imperils our well-being, an increasingly competitive global economy for many American workers and industries, and rising income inequality. The tax code affects each of these problems, and a successful tax reform effort will need to address each of them—or, at a minimum, avoid making any of them worse.

As policymakers return their attention to the nation’s fiscal crisis, reforming the tax system has become a focus of debate. To help inform discussions, The Hamilton Project will release a set of economic facts about taxes that provides an economic context for tax reform, and basic economic criteria that should be used when evaluating tax reform options. These facts will be released during a public forum on May 3 in Washington, DC.  As part of the policy forum, former Council of Economic Advisers Chair Martin Feldstein and Lawrence H. Summers, former Assistant to the President for Economic Policy and former U.S. Treasury Secretary, will discuss the broad economic case for tax reform.  They will be followed by a panel of distinguished experts who will focus on principles for a successful tax reform effort.  More information about the event can be found by clicking here.