The United States continues to confront a weak economic recovery. According to today’s employment report by the Bureau of Labor Statistics, payroll employment increased by 117,000 in July, and the unemployment rate edged down to 9.1 percent. The private sector added 154,000 jobs while governments continued to shed jobs. Furthermore, recently released GDP numbers show that economic growth fell far more during the worst part of the recession than was previously thought and the pace of recovery since then has been well below that seen in past recoveries and weaker than expected.

As policymakers turn attention back to policies to drive a near-term economic recovery, it is also crucial to target longer-term policies that will spur the pace of U.S. innovation, boost earnings for American families, and raise our competitiveness in the global economy. In this month’s posting, we focus on the role of innovation in determining American living standards. We also continue our look at the nation’s “job gap,” or the number of jobs that the U.S. economy needs to create in order to return to pre-recession employment levels while also absorbing the 125,000 people who enter the labor force each month.


During much of our nation’s history, innovation and technological advancement have been key drivers of rising living standards by raising compensation of workers, developing new industries, and lowering consumer prices. Since 1973, however, the pace of U.S. innovation has slowed, and wage growth has lagged. Even more troubling, the wage gains arising from recent innovation have not benefitted the typical American.


The chart below illustrates this link between productivity and compensation. It is evident that when workers produce more, they also earn more. In the latter half of the past century, labor productivity (the blue line) and hourly compensation (the red line)—the sum of wage and other benefits such as health care, vacation days, and retirement—increased at a rate of about 2 percent per year. As a consequence, real hourly compensation increased from $9.88 per hour in 1947 to $35.44 per hour today, which represents a tremendous gain in living standards.


Yet the chart also demonstrates that compensation growth has slowed during the last four decades due to a slowdown in productivity growth. From 1947 to 1973, the inflation-adjusted hourly compensation of workers increased by a rate of 2.7 percent a year, but since then it has increased at the slower rate of 1.6 percent. This small change in the rate of growth has dramatically affected the wellbeing of American workers today: if this slowdown had not occurred, all else equal, the wages and benefits of workers would be $18 per hour higher. 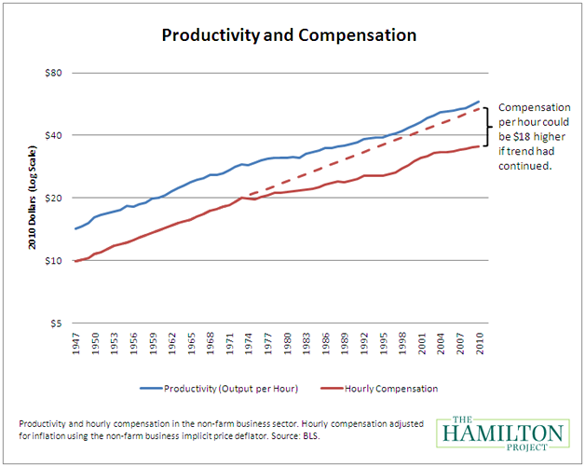 And while the slowing pace of innovation in the United States has been detrimental to workers overall, the slowdown has been harder on some than on others.  For many Americans, the story is not just one of slowing gains but of outright declines in earnings, because increases in overall wage growth have not been evenly shared. As previously reported, earnings for men in the middle of the income distribution have actually declined by around 28 percent since 1969 because of stagnating wages for those men that do work and because of rising rates of non-employment.

The Future of U.S. Innovation


Reinvigorating the momentum of innovation is imperative to creating broad-based economic growth and higher living standards for all Americans—and certainly necessary if the United States is to remain a leader in the global marketplace. Even in today’s constrained fiscal environment, it is important that government undertake the investments necessary to benefit Americans today and in the future.


On June 28th, The Hamilton Project held a forum “PhDs, Policies, and Patents: Innovation and America’s Future,” that brought together experts from academia, the business community and government to discuss the barriers to U.S. innovation, and potential paths forward for promoting new developments and technologies.

As a follow-up to that event, the Project has created a new policy memo highlighting a dozen economic facts about innovation. These facts help point to policy actions that could spur new innovations, including government support of basic scientific research, investments in the skills of our workers, especially in science, technology, engineering and math (STEM) fields, support for women and other minorities to overcome barriers that keep them from studying these fields and entering the workforce, and promoting an immigration system that is as open to the world’s best and brightest as our university systems are.


The United States is still facing a severe job gap of more than 12 million jobs. The chart below shows how the job gap has evolved since the start of the Great Recession in December 2007, and how long it will take to close under different assumptions for job growth. The solid line, in particular, shows the net number of jobs lost since the Great Recession began. The broken lines track how long it will take to close the jobs gap under alternative assumptions about the rate of job creation going forward. 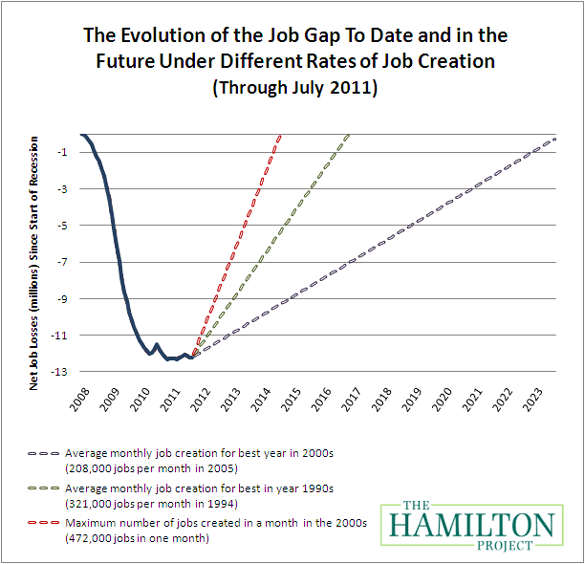 
With today’s tepid employment numbers, continued weakness in the broader economy, and a job gap that remains stubbornly high, the path to recovery will remain challenging and may take many years. Full economic recovery will require both immediate relief and long-term investments to help ensure our nation’s competitiveness in the global economy. In order to achieve the American Dream—that every generation does better than the last—our economic strategy must also promote broad-based economic growth that is widely shared. Policies that spur innovation are one critical piece of that strategy, as are investments in education and training that can provide Americans with the tools they need to succeed in a rapidly changing world.


In the fall of 2011, The Hamilton Project will address the need to expand training programs for disadvantaged and dislocated workers, make community colleges more responsive to labor-market demand, and improve our K-12 education system.