The November employment numbers, released today by the Labor Department, show continued weakness in the labor market. The economy added only 39,000 jobs last month, not nearly enough to absorb new entrants let alone to make headway at reducing the pool of the unemployed. As a result, the unemployment rate ticked up 0.2 percentage point to 9.8 percent last month.

For the past few months, The Hamilton Project has examined the “job gap,” or the number of months it would take to get back to pre-recession employment levels (while absorbing the 125,000 people who enter the labor force each month). This month we will also continue our look at longer-term employment trends, focusing specifically on the plight of male workers in the United States.

Long-term Labor Market Trends for Men in the United States

Up until the early 1970s, virtually all prime-aged men were gainfully employed—regardless of whether they had a high school diploma or a college degree. Over the last 40 years, however, the United States has witnessed a dramatic change in the employment situation for men, particularly for less-educated workers who have faced greater challenges finding jobs and have increasingly dropped out of the labor force.

As shown in the chart below, while employment rates for men with bachelor’s degrees have declined only slightly, employment of men with only high school diplomas has fallen considerably—from a high of 97 percent in 1967 to just 76 percent today. (These figures exclude incarcerated men—in 2009, 3.4 percent of men ages 30-50 with high school degrees were institutionalized, versus only 0.3 percent of men with college degrees.) 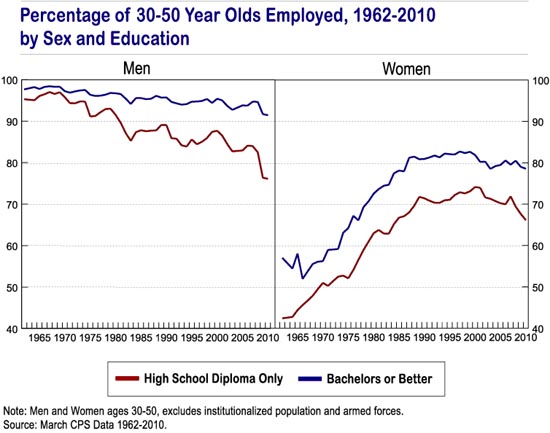 However, the decline in employment among less-skilled men over the last 40 years also reflects a long-run trend wherein fewer and fewer of these men work, even when economic times are good.

What are the forces behind this trend for men in the United States? Quite simply, it’s complicated. Changes in employers’ needs and their demand for workers with specific skills brought on by technological advancement, economic globalization, and increased competition for business investment are one cause of declining opportunities for high-school graduates. Other causes include the declining influence of unions, which have traditionally secured steady employment for less-educated workers. In addition, workers with work-limiting disabilities are increasingly likely to apply for Social Security Disability Insurance benefits rather than stay in the labor force; in 2008, 5.6 percent of men ages 40-59 had effectively left the workforce permanently to take up these benefits.

Furthermore, the United States, once the world leader in the percent of workers with college degrees, now lags significantly behind Canada, Japan, Korea, and other industrialized countries. While college completion rates in these countries have surged over the last 30 years, the share of young men holding bachelor’s degrees in the United States is roughly the same today as it was in 1980. In short, the increase in the number of higher-skilled workers in the United States has slowed at the very same time that the rewards to staying in school longer—more job opportunities, higher wages, and better benefits—have increased.

These long-term trends among men explain some of the cause behind persistently high unemployment, illustrated below in our job gap graph. Again, this shows the number of jobs the economy needs to add in order to return to pre-recession employment levels while absorbing the 125,000 people who enter the labor force each month. 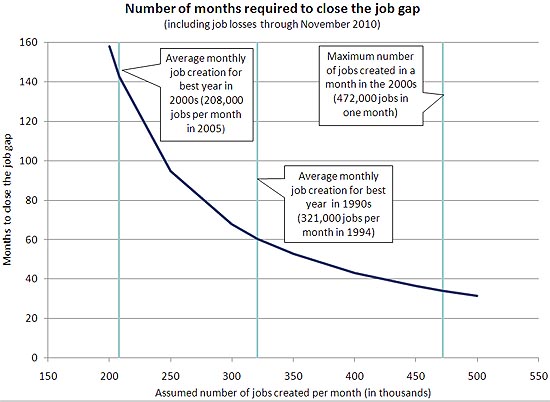 Although the financial crisis and recession triggered a high rate of unemployment—particularly among men—its persistence reflects labor market trends that existed long before 2007. To help combat these trends, new policies are needed to create jobs and broad-based income growth for American workers over the long-term.

While there is no magic bullet for solving our nation’s long-term employment challenges, The Hamilton Project and the Center for American Progress unveiled three new policy proposals at an event today to help create well-paying jobs and better prepare American workers to compete in today’s rapidly changing global economy. These proposals, available at The Hamilton Project, provide new thinking for creating transparency in higher education, creating a disability insurance system that supports work and designing a corporate tax system for the 21st century.

The long-term structural challenges facing the U.S. workforce are significant and will require bold action. Our hope is that today’s conference will help encourage policymakers to work together to find common ground and to make the tough decisions necessary to meet the challenges of our times.

How much is long COVID reducing labor force participation? Not much (so far)

The immigrant workforce supports millions of US jobs