New dimensions of uncertainty are emerging. Lives are being unsettled around the world. To turn new uncertainties into opportunities, we must unleash people’s creative and cooperative potential. We must double down on human development. That is the conclusion of the recently launched 2021-22 Human Development Report titled “Uncertain Times, Unsettled Lives: Shaping Our Future in a Transforming World.”

Lives are being unsettled in many ways. For the first time ever, the global human development index (HDI) went in reverse—for two years straight. Nearly 9 out of 10 countries saw a drop in their HDI values in the 2020-2021 period, far exceeding the declines in the wake of the global financial crisis (Figure 1)—or at any time since the HDI was first released.

Figure 1. Share of countries with a drop in Human Development Index Value 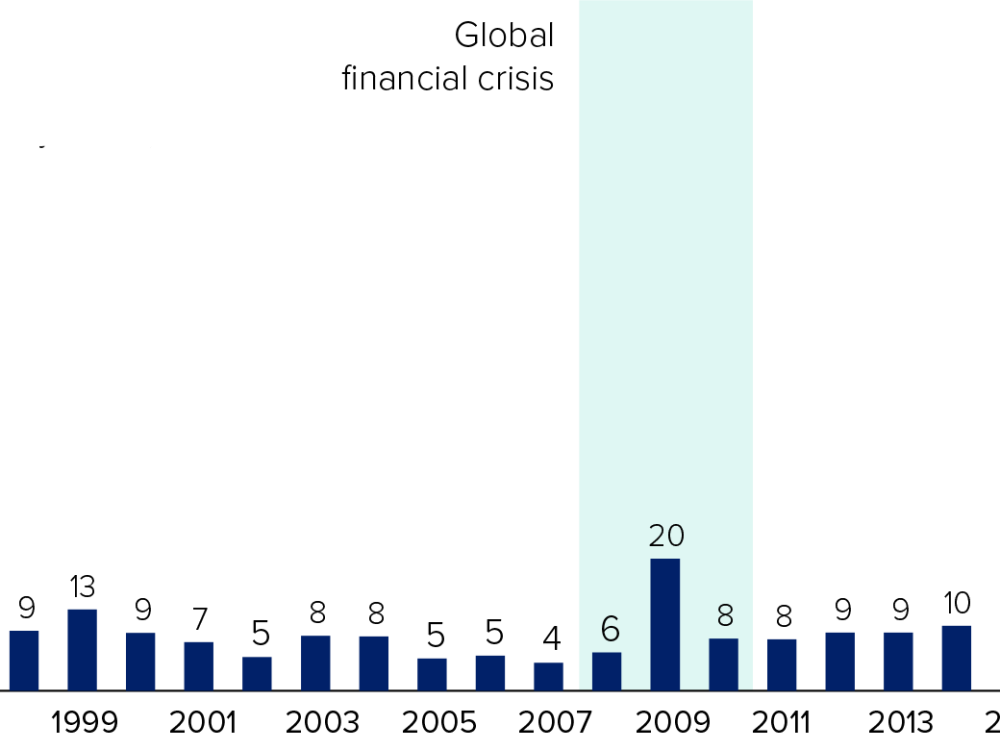 While most high-income countries were able to recover in 2021, a majority of countries with low and medium HDI values experienced ongoing declines last year.

Data at the individual level tells us that the forces at work are deeper than COVID-19 or shifts in the HDI, which, however powerful an indicator it is, measures only a subset of human development. UNDP’s 2022 Special Report on Human Security found that more than 6 in 7 people worldwide felt insecure. Feelings of insecurity are on the rise even in countries with the highest levels of HDI. At least a decade in the making, it is a trend that paralleled improvements in the HDI and other conventional measures of well-being. Likewise, reported stress levels—the feeling of being overwhelmed by what the world is throwing at us—have been increasing across all education levels.

What is going on? How does the wide-angle lens of human development help us understand and respond to this apparent paradox of progress with insecurity?

The 2021-22 Human Development Report argues that a new “uncertainty complex” is emerging (Figure 2), never seen before in human history. Uncertainty is not new, but its dimensions today are taking ominous new forms. Constituting it are three volatile and interacting strands:

Together, uncertainty and insecurity are corroding social fabrics. More insecure people tend to trust others less. With insecurity increasing, it is not surprising that globally less than 30 percent of people think that most people can be trusted—the lowest recorded value. More insecure people are also more likely to hold more extreme political views (Figure 3). This can account, partially at least, for the increase in political polarization seen across many countries over the last 10 years (Figure 4).

Figure 3. Political polarization on the rise

Source: Human Development Report Office based on World Values Survey, wave 6 and 7. See Harper and others (2022).

Large numbers of people feel frustrated by and alienated from their political systems. In a reversal from just 10 years ago, democratic norms and practices are backsliding. This despite high support globally for democracy. Deepening divisions and polarization, at their extremes, turn into violent conflict. Armed conflict is up. Even before the war in Ukraine, as many as 1.2 billion people were being affected by violent conflicts, about half of whom lived outside fragile contexts.

The conjunction of uncertainty and polarization may be paralyzing, delaying action to curb human pressures on the planet. The great frustration of our time may be our inability to act. So, what to do in this context?

We must shift our perspective on uncertainty. The damages wrought by superstorms or drought, from interconnected financial crises and pandemics can be profound, as we all know. They may very well get worse in ways that we cannot now anticipate. But if we only see uncertainty as a threat, then we have already given up the game. We cannot afford to be either fatalistic or glib.

Consider the COVID-19 pandemic in all its deep, impossible contradictions. It opened new reference points for what is possible:

Artificial intelligence (AI) is as much a disruptive opportunity as it is a threat. Its potential for enhancing labor demand is bigger than its potential for automating it. New tasks, new jobs, and new industries are all possible. Recall that most jobs came into being in part through the task-creating effects of new technologies: Around 60 percent of people in the United States are now employed in occupations that did not exist in 1940.

We do not, however, have the luxury to wait around for the long run. The negative displacement impacts of AI are too big, too likely, and too fast, especially if labor-replacing incentives dominate its development. Policies should provide incentives for AI to augment what people can do rather than seek to replace them. That would unlock and frontload its potential for positive transformation.

We thus need to put policies in place that help people feel safe and more in control over their lives. Without this, people will fear the context of novel uncertainty rather than embrace it. In essence, we must strive to weaken the links that run from uncertainty to insecurity.

Inequalities in human development in the 21st century

How do we do this?

Policies that focus on the three “I”s—investment, insurance, and innovation—will go a long way:

Social norms must shift too, as the social context is the crucible in which policies are made and implemented. Education can open new perspectives, not just through curricula but also by envisaging schools as spaces of inclusion. Social recognition of everyone is an important mechanism for social change. Media in its many forms plays a big role here.

The issue is not just about recipients of programs or target audiences but also about who is deciding. For example, women’s representation in political bodies shifts policy priorities and expands aspirations for other women and girls. Social movements have important roles as well in advancing human rights and changing social norms and narratives that are important determinants of people’s behavior, from consumption choices to which political leaders are supported.

Together, these amount to expanding human development writ large, going beyond a focus on well-being achievements, as embodied by the HDI, and toward Amartya Sen’s articulations of expanding agency and freedoms. Human development then becomes not just an end but also the means to navigating uncertainty. Where we head from here is up to us.