Is there an economically grounded solution, with clear benefits for host countries, displaced people, and their home countries, to the current refugee crisis? Consistently growing since 2012 and fueled by the civil war in Syria, the worldwide count of refugees according to United Nations High Commissioner for Refugees has reached 15 million people. And on June 13, the United Nations announced that they will attempt to resettle a record 170,000 refugees next year. This presents a daunting challenge, but there are hopeful solutions to be gleaned from past crises and current economic models.

Figure 1 shows the evolution of the number of refugees in the world since 1990, both in absolute numbers and in terms of world population. Indeed, the number of refugees per million people has grown from 1,300 in 2005 to about 2,000 as of mid-2015. However, by looking at the numbers from the early 1990s, and comparing it to today’s figures, we are still at well below the 1990 figure of about 3,200 refugees per million people, which were absorbed by countries around the world in the 10 to 15 years that followed. That is, if coordinated appropriately, the efforts to provide solutions to the current crisis are feasible.

Figure 1: Total refugees in the world per million people 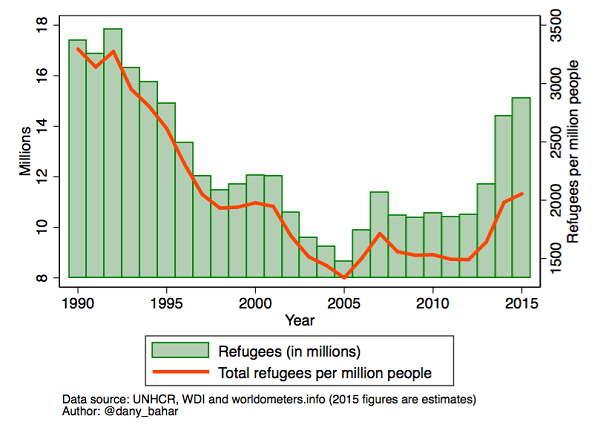 Naturally, coordinating a solution to the crisis is an extremely complex task for all countries involved.  Economists Jesús Fernandez-Huertas Moragas from Universidad Autónoma de Madrid and Hillel Rapoport from the Paris School of Economics have put forward, through extensive research, a practical method to deal with the crisis called the Tradable Refugee-Admission Quota System (TRAQS).

TRAQS builds on well-established models in the economics field of mechanism design, in particular the contributions of Nobel Laureate Alvin Roth and co-authors, which have researched ways to improve outcomes by implementing mechanisms to “match” supply and demand in several markets with imperfect information, such as school choice or kidney transplants.

In this way, TRAQS suggests implementing tradable quotas for refugees in three steps.

First, each country in the world is assigned a quota based on agreed-on parameters such as their size, income, unemployment rate, and the number of asylum seeker applications in the country during the previous years.

Second, countries are able to trade such quotas, based on their willingness to adopt refugees or, alternatively, to finance other countries to do so. As the authors explain:

“There are two ways through which countries can contribute to the public good of the ‘international protection of refugees’: through visas, or through money. The market for admissions will allocate refugees so that the marginal cost of hosting them is equalized across destinations. The solution is efficient in that it minimizes the total cost (or, for a given total cost, allows for the accommodation of more refugees).”

The price at which these quotas are traded will be defined by the market itself.

The third and final step deals with refugees’ destination preferences. TRAQS has a matching mechanism that uses refugee’s ranking of participating countries to find preferred destination for each candidate. Candidate refugees are then sorted in a random order by a central commission, and they are gradually granted their first choice until the established and traded quotas of that country are reached. Candidates, for which their first choice has been filled up, would be granted their second choice; and the process iterates until all refugees are provided asylum. It’s noteworthy that TRAQS not only deals with the willingness of countries to accept refugees, but also with the own refugees’ location preference, using market forces to assure efficiency, incentive compatibility, and fairness.

Further, the method does not only provide a short-term solution to the urgent refugee crisis, but it also can be an important development tool for the refugees’ countries of origin in the longer term. Emigrants are believed to play an important role in the development of their home countries (which are, for the most part, developing nations). In the short term, remittances can play a crucial role in contributing to macroeconomic stability of the refugees’ home countries. In the long term, migrants could be a key role in establishing trade and investment networks and in transferring technology and knowhow that translates into innovation, productivity, and growth.

Every crisis brings an opportunity. A coordinated effort to solve the current crisis will not only directly impact the present and future of the refugees and their families, but also potentially the development of their nations in the long term.