In recent years, China’s presence in sub-Saharan Africa has risen rapidly. Many fear that China spells doom for the Kenyan economy. Producers of manufactured goods, for example, face more competition from China in both foreign and domestic markets. Others argue that China will exploit Kenya’s resources and leave it unable to industrialize. If the manufacturing sector fails to take off, it will be harder to move people out of poverty.

But China also benefits Kenya. It finances key infrastructure and construction projects such as the standard gauge railway or the port at Lamu Island, and offers affordable and diverse products for consumers. Kenyan retailers benefit from greater profits by selling low-cost chinese products like plastic shoes or motorbikes. And even if local producers may struggle, critics often overlook the boon to consumers from China.

We investigate some persistent myths about China in Kenya in our paper “Deal or No Deal: Strictly Business for China in Kenya?” Let’s start with the three big ones.

When people learn of the bilateral trade deficit between China and Kenya, they usually react with alarm. But Germany also has a large bilateral trade deficit with China and seems to be doing just fine. What matters is the overall trade balance. Nobel laureate Robert Solow once remarked,  “I have a chronic trade deficit with my barber, who doesn’t buy a darned thing from me. As long as he balances his books and saves, his personal deficits are irrelevant.” Similarly, a country focuses on its trade balance for its balance of payments; country to country deficits are irrelevant.

Kenya exports little to China because it hasn’t exported much in general: The export to GDP ratio actually declined between 2005 and 2012, far from the norm for other high growth economies. Kenyan manufacturers must pay higher transport costs and contend with a climbing real exchange rate, making goods less competitive on global markets. In turn, Kenya’s exports fall, hurting net exports and resulting in a negative overall trade balance. So if Kenya, for example, makes it easier for Omo (a popular domestic brand of washing powder) to produce, Kenya will export more to the world, not just to China.

And consumers now have greater variety and choice. Someone looking for a budget smartphone can pick up a Huawei phone for around Ksh 6,000 (about $60). A mitumba trader can boost profits by buying a bale of shoes from China for half of what they would cost if sourced locally. Moreover, since small shops still constitute up to 70 percent of retail shops, retailers importing goods for resale appear to have benefited on a large scale from Chinese products.

Myth 2: China brings in all of its own people

The same survey reveals Chinese companies have created nearly 2,200 direct jobs, which is equivalent to 5.3 percent of the total jobs created through foreign direct investment. Most of these jobs are in automotive original equipment manufacturing, metals, and especially communications supporting thestrong performance of the sector.

China and India also take the lead in job creation. China ranks fifth overall and India is number one with just over 7,400 jobs from foreign direct investment. Hence, China, and India are not only important sources of trade and investment, but new jobs as well. 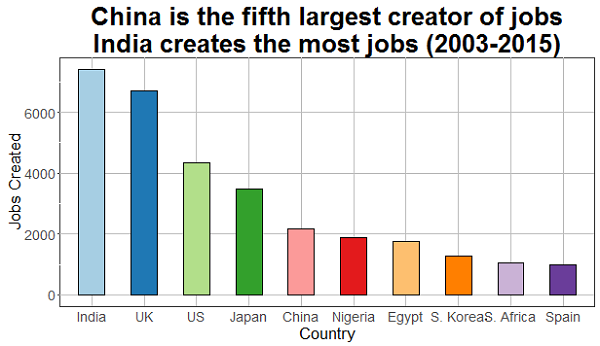 Source: FDI Intelligence from the Financial Times Ltd 2015; Deal or No Deal: Strictly Business for China in Kenya?

Chinese companies are spread across almost every major sector of the economy, operating in the manufacturing, services, and construction sectors. Chinese investment is more than just state-owned companies negotiating directly with the government, and Chinese firms have taken interest in more than natural resources in Kenya. Aside from metals, in 2014, the communications sector received $150 million in investment from China, and the automotive original equipment manufacturing received $68 million.

Many private Chinese companies are looking to access the domestic market or to produce goods for export to other countries. A number of small and medium-sized enterprises are attracted to the manufacturing and service sectors, and larger companies are drawn to construction. Some bid for projects from China’sMinistry of Commerce and receive support based on performance; others raise capital from family and friends in China. Meanwhile, state-owned firms can access subsidized credit from the China export-import bank. But the size, operations, and financing of Chinese firms is quite diverse, something often overlooked when discussing Chinese investment in the country.

There are still problems with Chinese involvement in Kenya. Corruption remains a major concern and some commentators have raised questions about the high cost of the standard gauge railway and the increasing debt burden. Indeed, China is more of a business partner than a donor.

But despite many problems, China’s involvement in Kenya is a net positive, as most trade relations in the world tend to be. If Kenya leverages Chinese know-how and uses relatively cheap imports to satisfy the basic needs of the population, it could at the same time jump start its export engine in areas of comparative advantage such as tea, cut flowers, or chemicals. That would make trade for both China and Kenya even more of a win-win.

How should the G-7 respond to China’s BRI?