Russia’s economy remains in recession, and the country has now experienced one full year of economic decline. Yet there might be some light at the end of the tunnel. Russia’s recession officially began in the fourth quarter of 2014 and then deepened significantly throughout 2015. Growth reached just 0.6 percent in 2014 and the economy is expected to contract by 3.8 percent in 2015.

As seen in Figure 1, the recession is closely associated with the fall in oil prices. 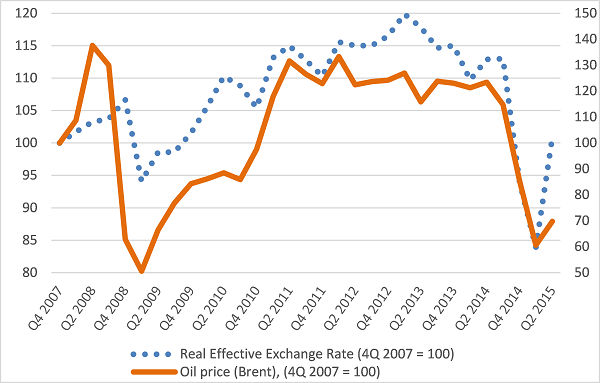 In Russia’s flexible exchange rate regime, the decline in the country’s main exports (oil and gas) immediately results in a weakening ruble. Since oil prices halved in late 2014 to about $60 per barrel, the ruble depreciated in equal measure. This rapid depreciation of the real effective exchange rate (REER) caused a sharp contraction in imports. Russian households and firms simply could not afford anymore to pay for the rising cost of foreign goods and services. Until now, this has led to a deep recession and Russians have had to reduce their consumption, resulting in a much larger group of Russians now living in precarious conditions.

However, with a weaker exchange rate new opportunities are starting to emerge. For the first time in decades, “Made in Russia” might have a chance to become again a global trademark. As the weaker ruble created a price advantage for some industries, export volumes started to rise, in turn generating investment in certain sectors. Exports to countries outside the Commonwealth of Independent States increased in the mining, chemical, and machine-building sectors. As a result, Russia’s total export volume grew by 1.7 percent in the first half of 2015. Until now, this was not enough to generate an overall increase in non-energy exports, but this could change in the medium term.

What will it take to see more products on international markets made in Russia? So far the positive impact of the ruble’s depreciation on Russia’s tradable sector has been limited and uneven. Output increased in some sectors, such as mineral extraction and chemical production, while agricultural output and foodstuff production were supported not only by the depreciation, but also by Russia’s ban on food imports. Yet, the relative improvement in prices did not significantly impact exports for most of Russia’s manufacturing sector—in particular non-energy exports, as many of the country’s industrial products remained uncompetitive on international markets. In facts, manufacturing output contracted by 2 percent in the first half of 2015, whereas it had grown by 3.5 percent over the same period in 2014. The key question is: Can this change in the medium-term and lead to a broader boost in manufacturing and exports?

For some manufacturers investments are still needed to take advantage of the price adjustment. Companies with strong quality standards seem to be benefitting already from the weaker ruble while others still need to improve their competitiveness. Changing the product profile and producing at international quality standards across the board might take some time and investment. But this process seems to have started as investments in some sectors have already increased substantially, especially in the chemicals, rubber, plastics, electronics, and machine-building industries (Figure 2). 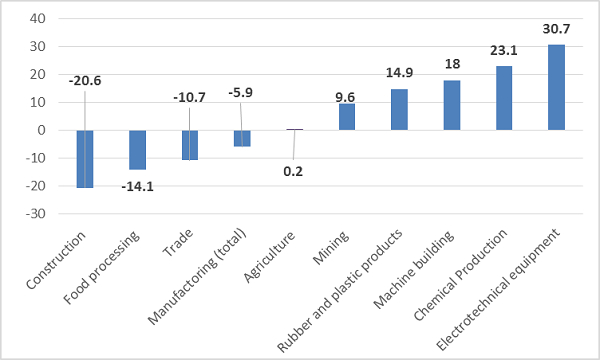 Lead Economist for the Russian Federation

Investment decisions are driven by price advantages and the investment climate. Russia’s investors still lack confidence for broader investments and much will depend on progress on Russia’s overall structural reform agenda (i.e. of making factor markets more efficient and building a better regulatory environment which fosters competition). This is the long-term agenda Russia has been working on as recently recognized in the World Bank’s Doing Business Index 2016. Then the conditions will be generated to nurture the brand “Made in Russia.”

There is nothing for you here: Finding opportunity in the 21st century