The infrastructure throughout sub-Saharan Africa requires additional investments of billions per year to be brought up to par. In particular, the region’s ports are a bottleneck and contribute to lengthy delays that significantly increase the cost of doing business across the continent. So wouldn’t it be sensible to invest in a massive extension of port facilities all over Africa? Probably not.

As my colleagues and I show in our recent paper, “Why Does Cargo Spend Weeks in Sub-Saharan African Ports?”  it is actually the  collusion between controlling agencies, port authorities, private terminal operators, logistics operators, and large shippers that poses the biggest challenge to the efficient handling of goods. It is the governance of the ports that matters most, not the large-scale investments in infrastructure.

Here are the facts: Cargo dwells in sub-Saharan ports unusually long—more than two weeks on average, compared to under a week in large ports in Asia, Europe, and Latin America. Excluding Durban and Mombasa, the average amount of time cargo dwells in sub-Saharan ports is close to 20 days (Table 1). These long wait times hurt the efficiency of port operations and the economy in general. 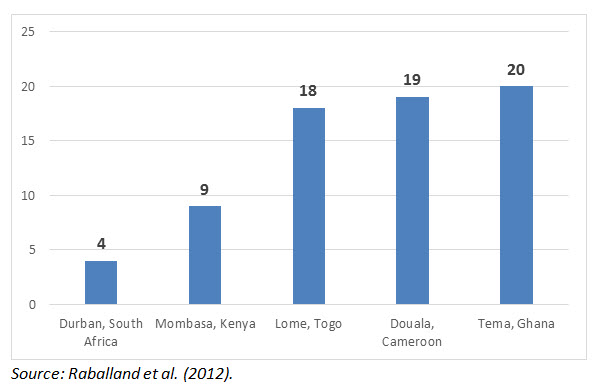 Congestion and delays at sub-Saharan ports make the region’s manufacturing companies (who typically depend on sea transport) largely uncompetitive. Consumers lose also, as imports become more expensive. For manufacturing companies, if they need to wait for weeks to get their inputs, they need to stock large quantities, which in turn creates the need for large and extremely costly inventories. As a result, it is difficult for countries with long cargo wait times to attract foreign direct investment.

Reaching the highest international standard for such wait times (3-4 days) is difficult since it requires having private sector practices at par with excellent public practices.

There are three categories of ports in the world: (1) “unreformed” ports, where average “dwell time” is more than 15 days; (2) “partially reformed ports,” where dwell times average between 6 and 10 days; and (3) “world-class ports,” with average dwell times of around 3 days.

In sub-Saharan Africa, most ports are still “unreformed.” However, some ports—Dar es Salaam, Mombasa—have made the first step and reduced the average dwell time from 15-20 to 6-10 days. This first step in port reform typically entails new investment in equipment and infrastructure, some changes in storage tariffs, new traffic flows, and increased storage areas (usually including storage capacity outside the port area).

However, going the full distance to reach world-class port status has only been achieved in Durban. This lies with the fact that it requires a full revolution of incentives, behaviors, and processes that is extraordinarily difficult to achieve in most ports. The port needs to put pressure on the private sector to reduce delays. Durban took three steps that helped facilitate such a revolution:

These measures, as well as strategies enacted by a public-private port committee, helped transform the Durban port.

The widespread assumption that funding additional port infrastructure will in turn translate into shorter dwell times does not hold in the medium to long term, especially when it comes to expanding existing ports.

The impact of demand and market structure is at least as important as the infrastructure bottlenecks and the inefficiency of clearance procedures. In fact, there have been noticeable improvements in both infrastructure provision (notably through increased participation of private sector) and customs clearance efficiency in recent years in most of Africa, but the time taken to clear cargo from ports remains inordinately high.

The market structure of the principal trade sectors, with longstanding, relatively unchallenged monopolies and oligopolies, is another explanation for high cargo dwell times in sub-Saharan Africa. It also explains why most industries that are not time-sensitive, such as those that export raw materials or minerals, prosper on the continent, and why time-sensitive ones that tend to add more value do not. This monopolistic market structure also illustrates why cargo dwell times have not declined in any substantive way for years: the pressure from the private sector is not genuine, in most cases the lengthy wait times enable some importers to remain market leaders and avoid competition.

In sum, building more terminals or purchasing new equipment is unlikely to bring Africa’s ports to world-class status alone. In a time when the demand for infrastructure in sub-Saharan Africa is so in demand, it is crucial to remember the complementary factors that have kept the region’s port wait times so long as well.