,” a book published this month by Brookings Institution Press.

As President Obama embarks on his fourth trip to Africa this week, he may reflect on his State of the Union address of 2013. In that speech he set an ambitious goal for the United States to “join with our allies to eradicate … extreme poverty in the next two decades.” Africa represents the last hurdle to making this goal a reality. As the figure below shows, East and South Asia have done the heavy lifting in the effort to eradicate extreme ($1.25 per day) poverty over the last 25 years. Africa has had far less success. It is not just that poverty in Africa is deeper and more widespread than in other regions. Economic growth should be able to overcome that, and many African economies have sustained growth over the past two decades. Rather, poverty in sub-Saharan Africa is a puzzle. It responds to income growth and to changes in income distribution less than anywhere else in the developing world. 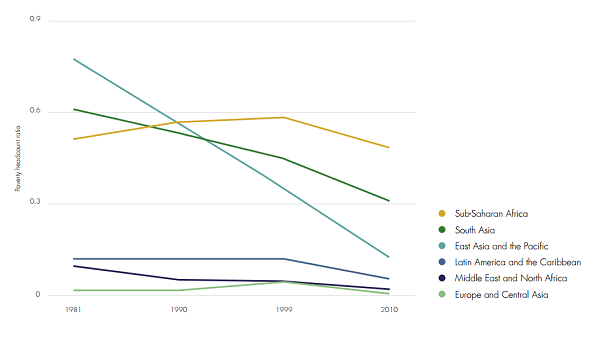 Africa’s structural pattern of growth is largely responsible for the tenuous connection between growth and poverty reduction. Put simply, despite solid growth since about 1995, Africa’s economies have not generated a sufficient number of jobs paying wages that draw households out of poverty. In Asia, where poverty has fallen dramatically, economies experienced significant changes in their economic structure, as workers moved from low-productivity sectors such as agriculture into higher-productivity manufacturing, boosting growth and real wages. In Africa structural change has contributed very little to growth. In fact until the turn of the 21st century an increasing share of African workers found themselves in low-productivity, low-wage employment.

Since about 2000, Africa’s economic structure has begun to change, but the change has consisted largely of workers from agriculture moving into services such as trade and distribution. Only about one in five workers leaving agriculture finds employment outside of the services sector. This is movement from very low-productivity to marginally higher-productivity jobs. In sub-Saharan Africa services workers are on average only about twice as productive as farmers. Output per worker in manufacturing is more than six times that in agriculture. Not surprisingly, cross-country evidence and country-level simulations strongly suggest that Africa’s performance in reducing poverty would have been better had high-productivity sectors such as manufacturing, tradable services, and agro-industry grown more robustly.

Solving Africa’s poverty puzzle will require governments and the aid community to move in new directions. Because the sectors offering high productivity employment are so small, raising productivity and incomes in agriculture, where the poor are already employed, is essential. In the longer run the share of such high-productivity sectors as manufacturing, agro-industry, and tradable services needs to grow. All three have the capacity to create large numbers of good jobs, but for the vast majority of African countries the export market represents the only option for their rapid growth. Combining productivity-enhancing investments in agriculture with an export-led industrialization strategy is essential to make poverty in Africa more responsive to growth.

There are a number of things the United States can do to help. Over the past decade improved agricultural technologies have played only a minor role in many African counties. In part this reflects a failure by the international community to invest in appropriate agricultural innovations, but improvements in rural roads, market access, and irrigation are also needed to raise the profitability of new agricultural technologies. These things take money and leadership, and America has been largely absent in providing both. Indeed, in a cost-cutting move the World Bank, in which the U.S. is the largest shareholder, has threatened to cut off funding for the Consultative Group on International Agricultural Research, the birthplace of the Green Revolution.

To boost exports Africa’s economies need trade-related infrastructure and market access. African countries rank at the bottom of the World Bank Trade Logistics Index, largely as a result of deficient ports, roads, and communications. Here the United States can lead. It can push to reform the OECD-WTO “Aid for Trade” initiative and focus it on the binding constraints to Africa’s exports. Donors, including the United States, have not fulfilled their promise to make Aid for Trade additional to existing aid budgets. A second priority is to implement a simple, time-bound system of preferences for Africa’s non-traditional exports to high-income countries. The recent renewal of AGOA is an important signal, but the logical next step is for the European Union and the United States to harmonize their individual preference schemes.