“We’re not convinced that the climate change we’re seeing is anthropogenic in origin” says U.S. National Farm Bureau spokesman Mace Thornton. At the same time climate scientists have strong evidence of the contrary: climate change is mainly man-made and agriculture is playing an important role in it. Together with forestry (mainly deforestation) and other land use, agriculture is responsible for almost a quarter (24 percent) of all greenhouse gas emissions in the world.

Agriculture is at the same time both vulnerable to climate change and a source of emissions. Farmers have a good sense of the natural environment at their production location and its subtle changes. They adapt farm practices to changes in the climate if needed. But the challenge for farmers and their associations is to acknowledge that their own practices are contributing to climate change. Awareness is a precondition for a more dynamic and innovative search for solutions. So, what is wrong with current farm practices and what can be done to make agriculture less harmful for the climate? Let’s get a bit technical and consider the methods and latest estimates of the Intergovernmental Panel on Climate Change.

Plants are using sunlight and nutrients to produce organic matter. In this biological process significant amounts of methane, carbon dioxide, and nitrous oxide are released to the atmosphere. Emitted carbon is considered neutral, being associated to annual cycles of carbon fixation and oxidation through photosynthesis. Only non-carbon sources are considered as anthropogenic and measured in carbon dioxide equivalents. Methane and nitrate have a significant impact. Methane originates mainly from animals and from rice plants under water (lowland or paddy rice). One ton of methane is equivalent to 23 tons of carbon. Nitrate, being the most important fertilizer, emits due to efficiency losses in nitrate application, poor manure management, and poor soil cultivation practices. One ton of nitrous oxide is equivalent to 298 tons of carbon.

Agriculture and forestry are responsible for about 10-12 billion tons of carbon equivalents per year or about 1.5 tons of carbon per capita. To put this into perspective, carbon emissions per capita from fossil fuels are 6.2 tons in China and 17.6 tons in the United States. About half of the agricultural emissions are due to land use changes, mainly deforestation, and the other half is caused by specific agricultural practices, including two major sources: methane emissions from animals and nitrate emissions from soils. 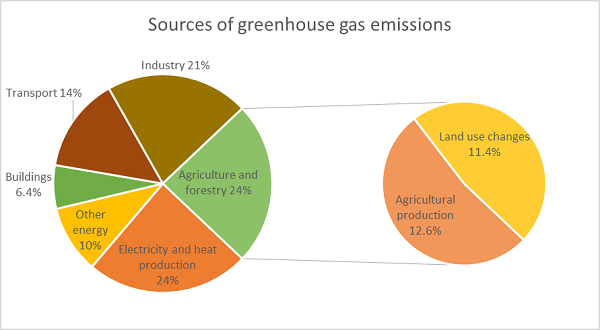 The challenge to balance climate change mitigation with the need to feed a growing world population forces us to come up with solutions that would lead to lower emission intensities per unit of output. This is not necessarily lower intensity of inputs like water, fertilizers, agricultural machinery, or plant protection products. It is just a smarter way to produce more while emitting less. Compare, for example, methane emissions from cows producing 2,200 liters annually (world’s average) with highly productive cows in Israel or California producing 10,000 liters a year. Five average cows supply the same amount of milk but emit significantly more methane than one highly productive cow. As methane footprints of cows differ due to breed and location-specific factors, the amount of saved emissions may be quantified in a specific farming system.

Environmentalists often overlook the fact that more productive cows emit less carbon per consumed liter of milk. In this view social, economic and environmental objectives of supplying more food with less carbon emissions are consistent. Let me highlight three further solutions of how we can make agriculture climate smarter. In crop production, the key is to:

The higher the content of fertile organic matter in the soil (humus), the better is its ability to keep nitrate in the soil. Organic matter on the soil is also useful. It saves water and can help to avoid nitrate losses. This means the use of the plough will have to be reduced in future farming. Switching from ploughing to softer cultivation practices, in particular in areas with limited rainfall, combines climate mitigation with good water management.

Lowland rice is a particular challenge where the transformation of organic matter under water leads to significant methane emissions. Nitrogen losses and water pollution adds more to the problem. Deep placement of fertilizer can be a practical solution for reducing the levels of methane emissions. Tests have shown that this practice can increase crop production up to 36 percent, reduce fertilizer use by up to 38 percent, and reduce nitrogen losses by up to 40 percent.

Governments can facilitate adoption of climate-smart technologies as a public good. It is in the interest of the public to accelerate adoption rates of climate-smart technologies, to invest in research and pilot projects, to create awareness among producers, and to adopt regulations to achieve strategic adaptation and mitigation goals. In the long term, climate-smart agriculture will also help to remain competitive on global food markets. The Irish “Agriculture Green Growth” strategy is a good example of such a forward-looking strategy in Europe. Rwanda leads this development in Africa.

Five trends to expect in Africa for the rest of 2022