As I wind up three-and-a-half fascinating, rewarding years in Turkey, one theme stands out: Turkey’s phenomenal urbanization over the past three decades, and what this means for the economy but also more generally for social development.

Visiting Ankara for the first time, one cannot fail to notice the housing estates built just next to the ring road around the city. They are illuminated in red, green, and blue at night and stand on top of a newly developed residential valley, complete with water fountains, several mosques, and terraced housing on the opposite hill for the better-off. These estates are a prestige project of Ankara’s mayor for five consecutive terms Melih Gökce. They are a post-millennial mirror image to the modernist Dikmen Valley, one of Ankara’s first urban reconstruction projects inaugurated in the 1990s and still expanding.

Urban development is a topic of considerable debate within Turkey today. The daily agenda is filled in equal measure with ribbon cutting ceremonies for new urban infrastructure and protests against the redevelopment of traditional settlements or the rezoning of farmland for new construction. This is perhaps not surprising if one considers that Turkey’s urban population has more than doubled in the past 30 years to over 50 million people today. No country aside from South Korea has urbanized faster since the 1960s.

The often heated domestic policy debate obscures the fact that in international comparison, Turkey’s urbanization has been a remarkable success. A recent Brookings report counts four Turkish cities (Istanbul, Izmir, Bursa, and Ankara) among the 10 most dynamic worldwide in terms of an expanding market and growing employment opportunities. This is not to deny remaining challenges (more on these in my next blog). But Turkey has been able to combine rapid urbanization with sustained increases in living standards in ways that are far from self-evident. This can be seen in Figure 1, which shows that only a few countries have combined increases in urbanization rates above 10 percentage points since the 1980s with increases in per capita incomes of more than $5,000 (at PPP exchange rates). Turkey is among them, together with Chile, Malaysia, China, South Korea, Botswana, and a handful of OECD countries. In other countries, urbanization has either been stunted by policy (such as in India) or proceeded without a plan and government support, leading the gains from agglomeration to be lost in urban slums and sprawling cities.

The World Bank’s recently completed Turkey Urbanization Review helps us understand the circumstances and choices that made Turkey’s urbanization successful. A key factor to understand Turkey’s experience is that much of the urban land was owned by the central government. This meant that when rural migrants settled in the cities they did so on public land, where they were initially tolerated, granted usufruct, and later legal ownership rights, which then prompted migrants to invest in their properties and municipalities to connect them to public services. Thus Turkey avoided the creation of urban slums and at the same time created property rights that encouraged migration to the cities in line with economic opportunities. From the late 1980s and at an accelerating pace in the past decade, these migrant settlements were transformed into modern housing developments. The state housing agency TOKI was granted development rights on public land, and existing settlers were offered modern apartments in compensation for their existing dwellings. Rising densities made this self-financing model viable. Urbanization in Turkey was thus associated not only with improved economic opportunities but also with improvements in people’s access to basic services, thereby reinforcing the economic benefits of agglomeration.

Figure 1. Unlike in other countries, in Turkey urbanization has gone hand in hand with rising incomes 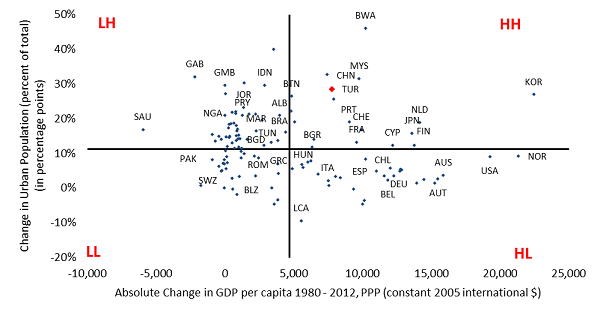 Two specific policy choices are equally important in Turkey’s urbanization story. The first was the 1984 metropolitan municipality law, which consolidated city planning and the provision of public services in large cities such as Istanbul, Ankara, and Izmir at the level of the metropolitan municipality in line with the cities’ economic footprints. This greatly facilitated coordinated urban development and investments in critical municipal infrastructure. The second was central government investments in connecting infrastructure, most importantly in transport. Starting with the railways in the 1930s, successive Turkish governments have ensured that transport infrastructure has kept pace with economic development. This has connected the Anatolian inland with the commercial centers on the coast and has meant that Turkey’s rapid global economic integration after 1980 was associated with increasing domestic integration and regional convergence. Figure 2 shows how this was reflected in a shift of economic activity towards secondary cities, and led to what some have called the rise of the “Anatolian tigers.”

Turkey has thus in many ways followed the recommendations of the 2009 World Development Report on Reshaping Economic Geography; its experience deserves to be studied around the developing world. In a sequel to this blog I will look at the remaining agenda to turn Turkey’s cities from engines of growth to magnets for global talent and cauldrons of innovation and social change. 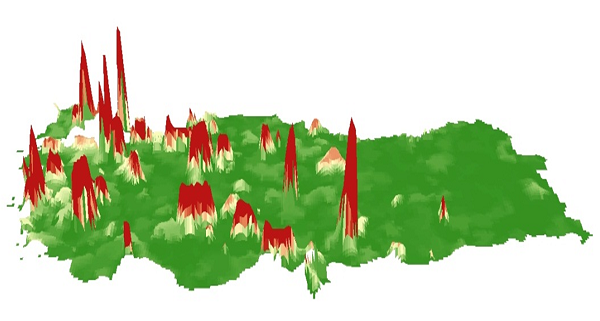 Source: Survey data collected by the Union of Chambers of Commerce and Industry of Turkey.