In their comments on Shanta Devarajan’s recent post, “Shame on me: Why it was wrong to cost the Millennium Development Goals,” Homi Kharas and John McArthur claim that public health care spending is necessary to improve health outcomes (see Homi’s response here, and John’s here). If they are talking about government spending, this is false.

Some people (notably McKeown) think that neither medicine nor any public action helped the progress in Europe. But the closing of the gap in urban vs. rural child mortality in Sweden starting in 1880—Pasteur’s big discoveries were in 1876—seems most likely due to the introduction of public sewer systems and/or people learning to wash their hands (it’s unclear what was publicly contributed to this change). Yet in either case the improvements did not stem from medical care, public or private. 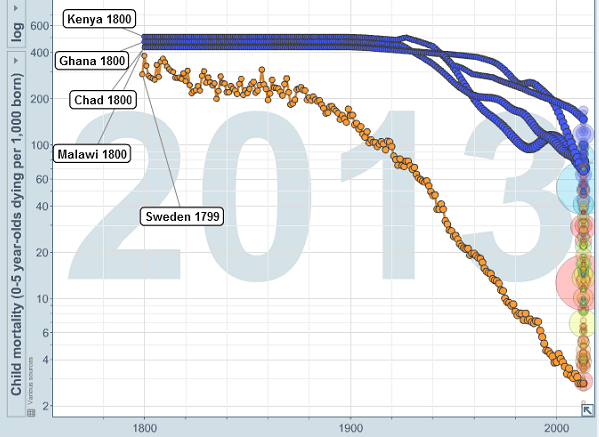 The change in Africa’s under-five child mortality is a different case. Since there were massive improvements (if we believe the numbers) before most governments were capable of doing anything, my conjecture is that most of this was due to the existence of, and private trade in, antibiotics. Maybe some immunization contributed to improvements as well, but that doesn’t square well with (1) the timing of the improvements, and (2) the discoveries and incorporation of important vaccines like measles into national programs.

In Figure 2, you can see the “Preston curve” showing the relationship between income and life expectancy for 2013, as well as the trace of some countries over time. Preston said there was a concave relationship, but much of the action is a shift over time due to technological advancement—for example, improved water or more space around housing.

Two countries’ experiences in Figure 2 are relevant here. First, there has been spectacular improvement even in Guinea, which has not been known to have a particularly well-functioning public health care system. The other is Nepal where things have gotten better steadily—and no faster or slower in the midst of the Maoist insurrection when virtually no government workers were in rural areas. 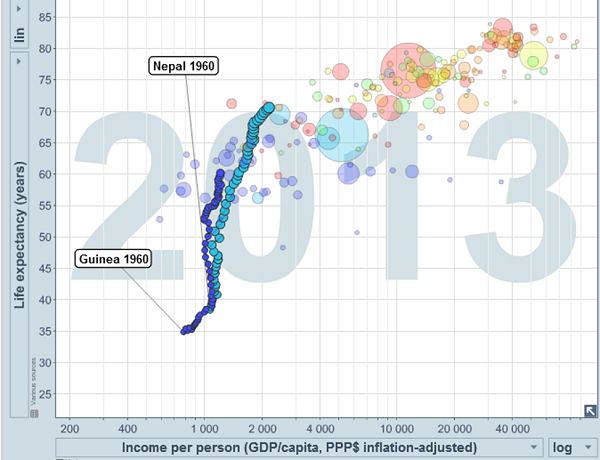 When I was in graduate school, there were many countries with under-five mortality estimated to be 50 percent, just like Sweden’s in the early 19th century. Now, even poor, fragile countries are doing much better than that. For them, it cannot possibly have anything to do with government spending, much of which is well-known to be wasted. Therefore it cannot be necessary for there to be government spending in health to have improvements. And though governments might be able to help, that would have to be looked at case by case. We have lots of reasons to doubt India’s ability to do much and they have a relatively stable, functioning government.

There have been a few papers lately that purport to show that more health aid has led to better health. Someone could use these as “references” for how government is successful at improving health outcomes. However, I am quite skeptical of the data—it is very hard to track down WHO and Healthmetrics data on cause-specific child mortality, always running up against “and UNAIDS.” I suspect “mortality” numbers have been calculated by multiplying “ARV drugs delivered” by some conversion factor just as the “lives saved from malaria” figures were concocted from “bednets delivered to governments.” When you run a regression with the left-hand side variable constructed from a right-hand side variable, you tend to get good results.