As an increasing number of International Development Association (IDA) recipients “graduate” from IDA, there has been a good deal of commentary about what to do with funds freed up. But what determines when countries “graduate”?

The World Bank’s 2013 “Review of IDA Graduation Policy” explains that the IDA “historical cutoff” for creditworthy countries was set at $250 per capita in 1964. That historical cutoff was arbitrarily reduced by 38 percent two decades later by introducing an “operational cutoff,” simply because “available IDA resources were not adequate to fund programs for all countries below this eligibility ceiling.” For the 2013 fiscal year, the cutoff in nominal terms was $1,195, less than one-third of the ceiling applied to lower middle income countries of about $4,000. Had the operational cutoff maintained its FY 1989 level relative to world GNI, the “operational” cutoff” in FY 2013 would have been $1,722.The corresponding “historic cutoff” would have been higher yet, at $2,375. To make matters worse, Galiani et al. show that IDA graduation serves a signaling function, leading to reduced access to other concessional aid as well. The IDA cutoff of $1,195 is now under one-thirtieth of GNI per capita of high-income countries, a number that has no basis in either analysis or equity. Just imagine if that 30-to-1 standard were applied for aid within donor countries. 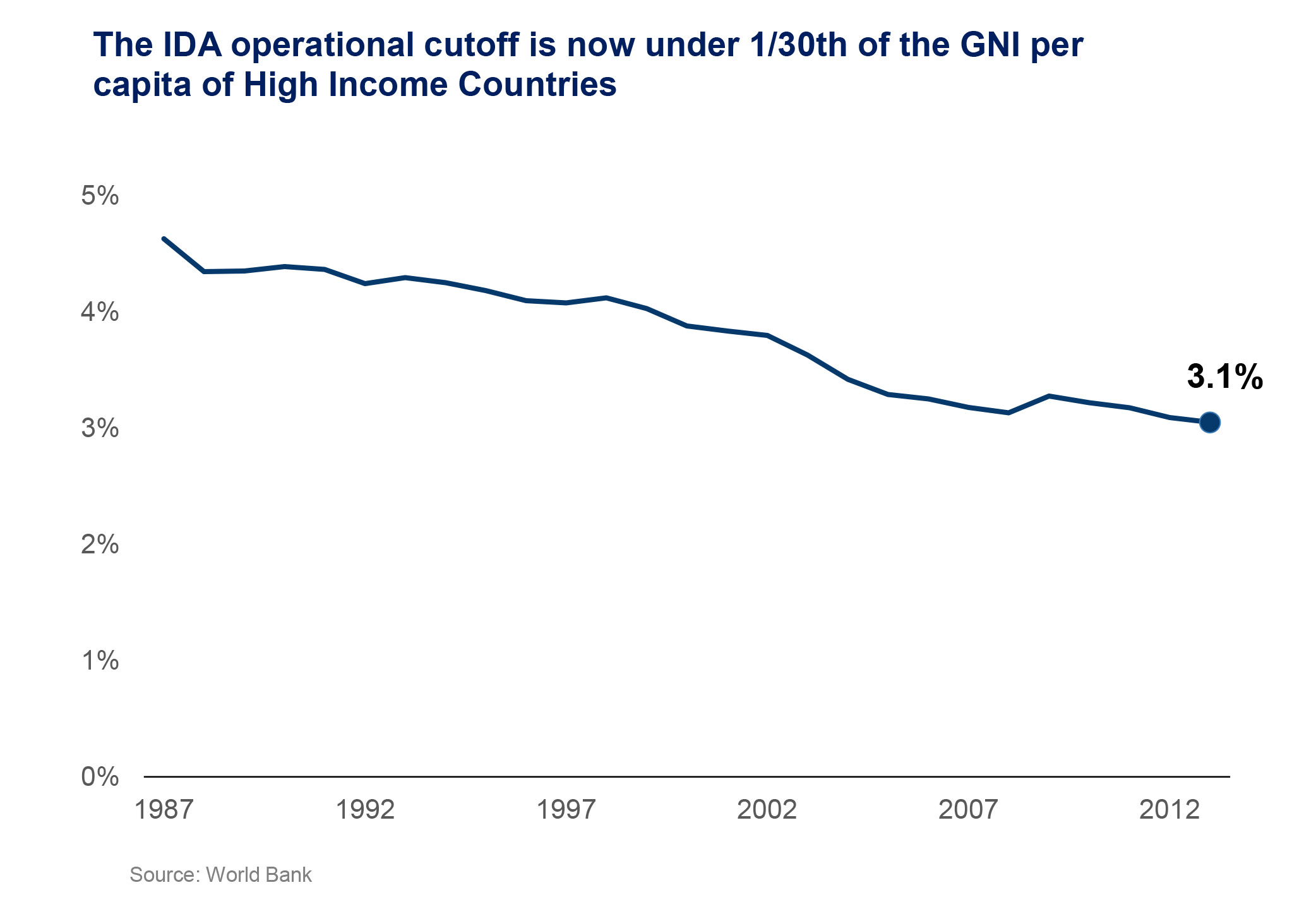 To make the point, this blog focuses on the contentious case of India, with a GNI per capita of about $1,570 in 2013 and now on a transition course toward losing access to IDA and to bilateral aid from the United Kingdom. Summers and Peck argue for extending this cutoff to the Global Fund as well, in spite of strong cautions on global public goods grounds from Glassman et al.

The reason is surely not lack of a high poverty burden in countries over the IDA cutoff. India alone hosts 30 percent of those in the world consuming under $1.25 per day. Like almost all countries, India could do better in mobilizing resources for poverty reduction. But Ravallion has shown the practical impossibility of India’s eliminating absolute poverty through redistribution from rich to poor—even leaving aside what the IMF has identified as its already excessive consolidated budget deficit. And as Pritchett and Kenny argue convincingly, $1.25 per day is in any event too low as a global poverty line.

Some might argue for disqualifying India from IDA or receiving official development assistance (ODA) on grounds that it could use its fairly good credit rating to borrow its way out of at least under $1.25 poverty. This would then lead to a debate on how much prudent margin India has for increased government borrowing while still servicing its debt, keeping its good credit rating, and avoiding increased vulnerability to shocks. There would in any event still be significant unmet needs on the margin.

Is it then that ODA funds would be less well used in India and other lower middle income countries than in low-income countries? Quite the opposite. The two biggest determinants of success of World Bank projects across countries are growth in income and the score on the World Bank’s measure of overall capacity, the CPIA. Both are highly correlated with per capita income. India’s CPIA score was 3.7, above the IDA average of 3.3. India’s growth has been high, and it is on track to meet the 2015 Millennium Development Goal commitment to reduce poverty by half. And India, like many other lower middle income countries, has the fiscal capacity to scale up and sustain promising aid-supported poverty programs.

India is, of course, a special case. Its population and its poverty burden are so big that it is far easier simply to exclude India from eligibility than to deal with the share of total aid it would get on the basis of usual need and performance criteria. This is particularly true when, as now, ODA budgets tighten. India has also traditionally been tough in dealing with donors and reluctant to seem to be asking for aid. But don’t donors ask for recipient countries to “be in the driver’s seat” and aim to promote democracy as well? Other strongly held arguments against aid to India have morphed over a generation from the country being hopeless, with a “Hindu rate of growth” that could not exceed three percent, to its being too formidable a competitor. Summers and Peck point to India’s space and aid programs (about $2.50 per capita inclusive) and to its being a major manufacturer of generic medications. To what extent are these (including South-South cooperation and saving lives globally by driving down drug prices) sins? Are they in any event worse than those of many “donor darlings”?

This is not to say that, other things equal, there should not be heavy weighting in IDA and ODA allocations to poorer countries and to fragile states, particularly given the risks and consequences of state failure. And given the small role of aid in public finances for lower middle income countries (very much so for India), there is a strong argument that aid should have to be high-powered; it should focus on mutually agreed changes in programs, policies, and institutions, and on results based financing rather than just financing more of the same. But that is different from a major bilateral or multilateral donor saying, “Let’s cut them off.” It may be too late to stop India’s “graduation” from IDA. But it is not too late to stop “defining development down,” and instead to raise the cutoff point for the International Development Association sharply.