In the past 30 years, the world has become wealthier everywhere except in fragile and conflict-affected countries. By next year, most of the world’s poor are expected to live in countries where civil conflict is common and government is incapable of providing basic services like security and rule of law. This trend is expected to continue, and in 2030 more than 90 percent of world’s extreme poor are projected to live in fragile and conflict affected states.

Even fragile countries that have been at peace for some time continue to face a high risk of relapsing into conflict. Understanding the factors that can reduce the risk of conflict is paramount for the prosperity of fragile countries and their citizens.  Our recent work suggests that international trade can have an outsized influence—positive and negative—on this risk. When there is chaos at home, a disproportionate amount of income, food, and other basic means of survival tend to come from other countries. For example, fragile countries on average are net food importers, while other developing countries are net food exporters. 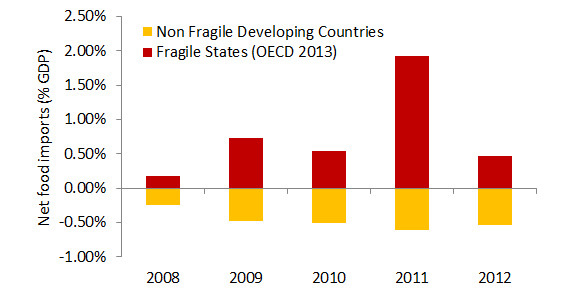 Source: Own calculations based on U.N. COMTRADE data (via WITS) and WDI data.

It is only natural to examine how trade and trade policy could tip the balance. What if a commodity price surge could fuel fighting? Or what if an increase in trade with neighboring countries could reduce conflict at home? Using a combination of quantitative analyses (both across and within countries) as well as an extensive review of the existing evidence, we show that trade, if managed correctly, might help reduce violence in fragile states.

We found strong support for a hypothesis known as the rapacity effect, showing that once valuable resources are available, people will fight over them. Indeed, across countries we find that a 10 percent increase in the prices of exported commodities raises the risk of conflict by between 2.2 and 2.5 percent. This effect is mainly driven by oil and mineral commodities, a result which has important implications for resource-rich countries.

But there is hope for policy solutions. We find that this rapacity effect vanishes for countries with relatively high levels of accountability. Indeed, diamonds have been a curse in Sierra Leone, but a blessing in Botswana; oil exports may have played a role in the ongoing civil strife in newly independent South Sudan, but not in Timor-Leste. In addition, we find evidence that when the Nigerian government in 2009 used oil money to demobilize and reintegrate militants in the Niger Delta, the positive relationship between oil price and conflict disappeared.

A second, more hopeful hypothesis is the opportunity cost effect, which posits that when trade translates into higher incomes, people are less likely to engage in conflict. While the cross-country evidence does not support this hypothesis, case studies of Nigeria and the Palestinian territories do. This difference between cross-country and individual country studies is consistent with much of the existing evidence. We suggest that country case studies are better suited to isolate this dynamic because the available data is better and the heterogeneity across subnational areas is smaller.

We also find that the opportunity cost effect can also apply to neighboring countries. Neighboring states play important roles in almost all modern civil wars, so intense trading with one’s neighbors reduces the duration of civil conflict. If country A and country B trade a lot with each other, country B will have higher incentives in helping country A to maintain internal stability (and vice-versa). When this trading occurs under trade agreements, it also reduces the risk of conflict.

So, what can be done? If trade does matter for the stability of fragile countries, how should policymakers act? The analysis suggests at least four general policy objectives relevant to ensuring that trade works to inhibit—and not incite or prolong—conflict:

As better data and analytical tools become available, evidence is growing that trade has the potential to stem violence and promote stability. With some resolve, policymakers and the international community can use this evidence to improve the lives of some of the most vulnerable populations in the world.