Super PACs and other lightly regulated political organizations are dumping hundreds of millions of dollars into American elections. What should be done about it? Unlike many candidates for federal or state office, so-called independent expenditure groups face no restrictions on how much individuals and groups can give to them. And thanks to several federal court decisions, including Citizens United v. Federal Election Commission, independent groups can spend unlimited amounts to influence elections. The public understandably worries about the political clout of wealthy groups—especially since donors often can hide their identities.

Reformers have proposed various remedies: disclosure rules, the appointment of a liberal Supreme Court justice to reverse Citizens United, even a constitutional amendment to overturn that decision. Those long-shot strategies, however, are unlikely to create the kind of small-donor democracy that many reformers seek. Money, like water, will inevitably flow into the political system. Laws can’t do much to reduce the amount of money in politics; what they can change is where the money goes.

An easier path to improving politics

In our new Brookings paper, The State of State Parties, we suggest an easier path to improving politics—one that is right under our nose. Strengthening state political parties can help offset the clout of super PACs.

Our study, based on a survey of 56 state-party organizations plus detailed interviews with 15 of their leaders, points to the distinctive and constructive role that state parties play in American politics. In an era when politics seems to be spinning out of control, party organizations are among the few actors that seek to integrate and balance interests—for instance, by recruiting candidates with broad appeal, by playing honest broker among contending partisan factions, and by building coherent strategies among campaigns up and down the ticket. Party organizations also generate a lot of grassroots activity to mobilize volunteers and voters.

State parties are among the most heavily regulated entities in American politics, a situation that diminishes their influence relative to non-party groups. For instance, the vast majority of state parties face restrictions on the source and size of donations, and some contribution limits are unrealistically low. In Massachusetts, no donor can give more than annual aggregate of $5,000 to all local and state parties. That’s a paltry sum in statewide elections that can easily cost $55 million, including $20 million in independent expenditures.

Super PACs and other groups naturally fill the vacuum because they do not have to contend with limits on raising and spending money. Often, outside groups effectively drown out the parties. In our survey, only half the parties said they advertise on TV and radio sometimes or often, usually because they lack the resources to do more. 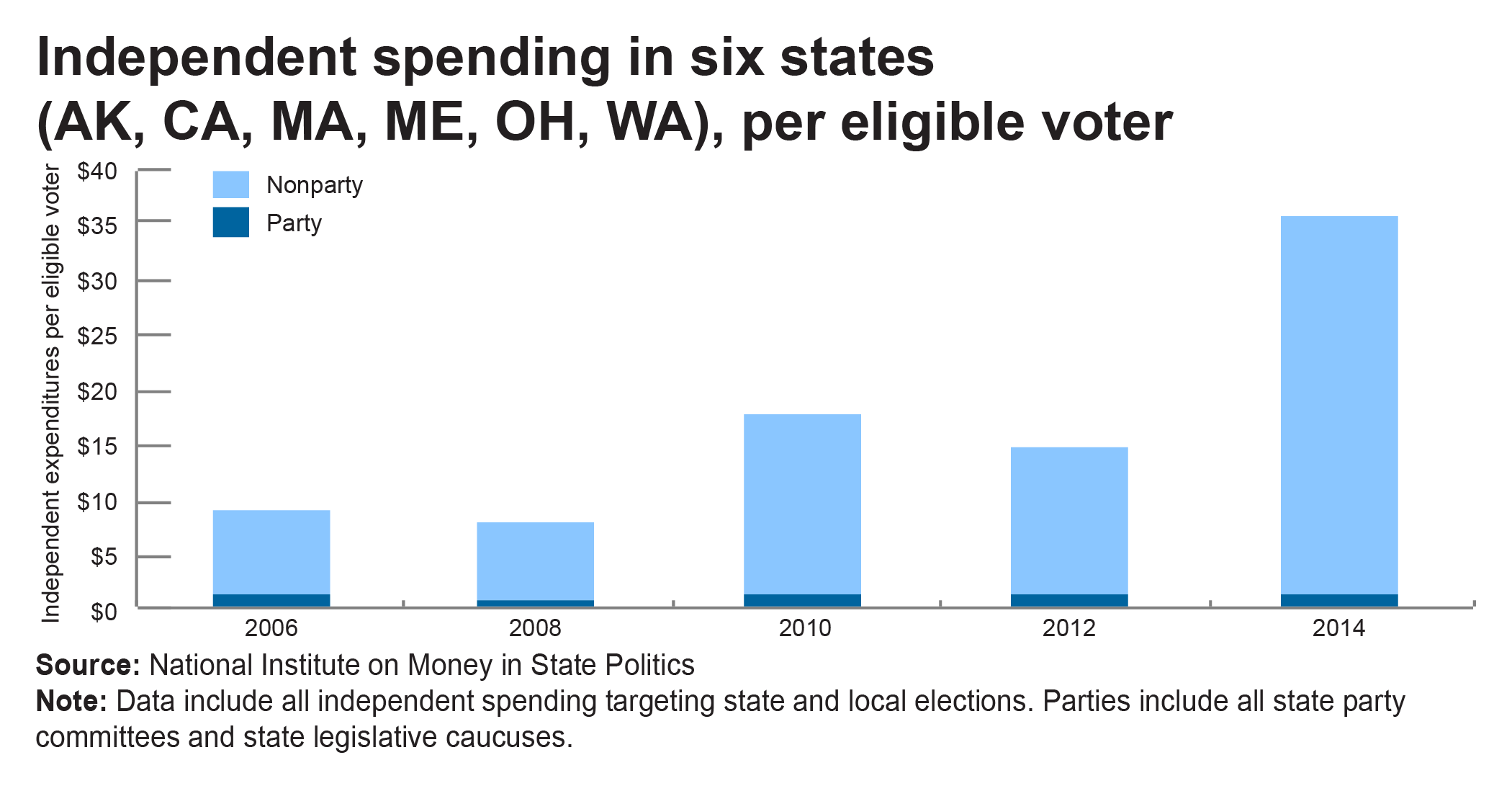 An especially significant finding is that restraints on political parties seem to amplify the activities and influence of outside groups. As illustrated in the table below, 65 percent of respondents in states with contribution limits to parties said that independent groups sponsor more than half or almost all political ads, compared to only 23 percent in states without contribution limits. 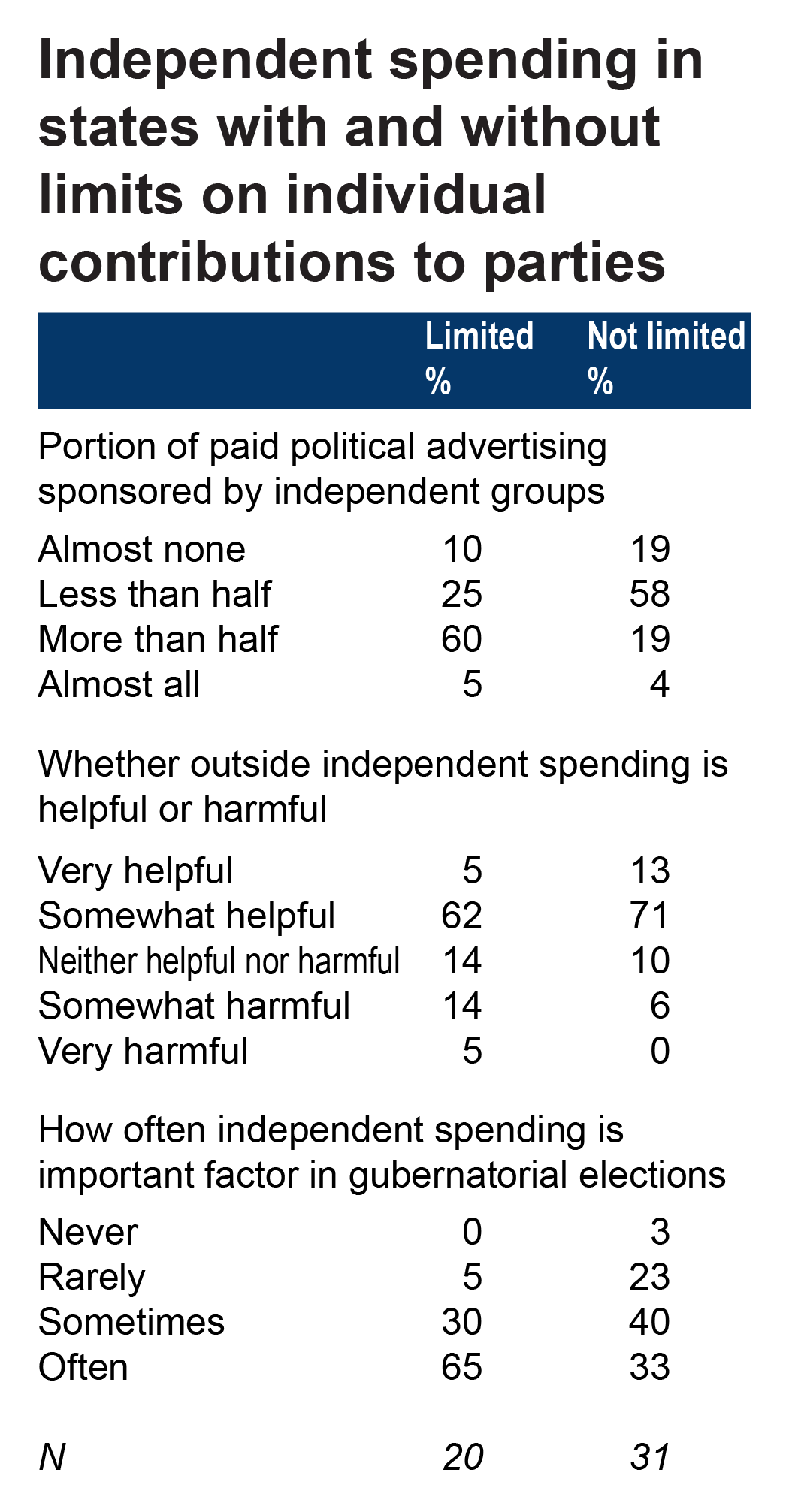 Correlation does not prove causality, but our findings provide strong circumstantial evidence that when you restrict the parties, you get more independent expenditures by non-party groups.

We recommend changes to strengthen state parties and restore them to a place of prominence in campaigns. First, state governments should raise or eliminate contribution limits so the parties can acquire sufficient resources to compete with outside actors. This would allow state parties to serve as clearinghouses for campaign money, which would bring more “dark money” toward accountability and transparency.

Second, parties should be allowed full freedom to coordinate their activities with their candidates and allied groups. This would make them more valuable to candidates and would allow the parties to perform their irreplaceable role of supporting candidates across the party ticket.

We also suggest giving parties favorable tax treatment so that donors are more likely to give to parties than candidate-sponsored super PACs or interest groups. We also recommend other regulatory changes that would encourage parties to do more grassroots work with voters.

Loosening the constraints on state parties would not stop the flow of money into politics (nothing can do that), but would channel more of the money to accountable actors. That’s why we think of this solution as building canals, not dams. And the incremental steps we propose require no sea-changes in public opinion or heroic legislation. In fact, they command support in both parties’ establishments, making them a good starting point for reform. That’s why we conclude that strengthening state parties is a realistic path toward a better balanced, more effective, and more accountable political system.