As Donald Trump marches towards the Republican nomination, speculations about the alternatives are intense. As we’ve written before, a brokered convention, denying Trump the nomination at the eleventh hour, seems like a real possibility. But one alternative could begin before the convention rolls around: an independent bid for the presidency—by Trump or by someone else.

The conventional wisdom has been that it’s too late for an independent to get into the race; that the ballot access provisions essentially mean that an independent candidate for president has to start very early. But in a Wall Street Journal column, my colleague Bill Galston has upended some of the conventional wisdom. Galston is an authoritative source on this question—in 1980, he worked for the independent candidacy of John Anderson. The Anderson team started in April, and with a lot less money than Trump or Bloomberg would have. Despite this, they managed to get Anderson on the ballot in all fifty states. Moreover, in the course of doing so they took Ohio to court for overly restrictive ballot access laws. In a case that still holds today, the Supreme Court in Anderson v. Celebrezze (then the Ohio Secretary of State) held that Ohio’s early deadline violated the First Amendment’s guarantee of freedom of association. Galston goes on to write: “Anderson v. Celebreeze remains good law today, and it has had an impact. As Mr. Winger [Richard Winger, Publisher of Ballot Access News] notes, lower courts have used it to strike down June filing deadlines in five states—Alaska, Nevada, South Dakota, Arizona, and Kansas.” 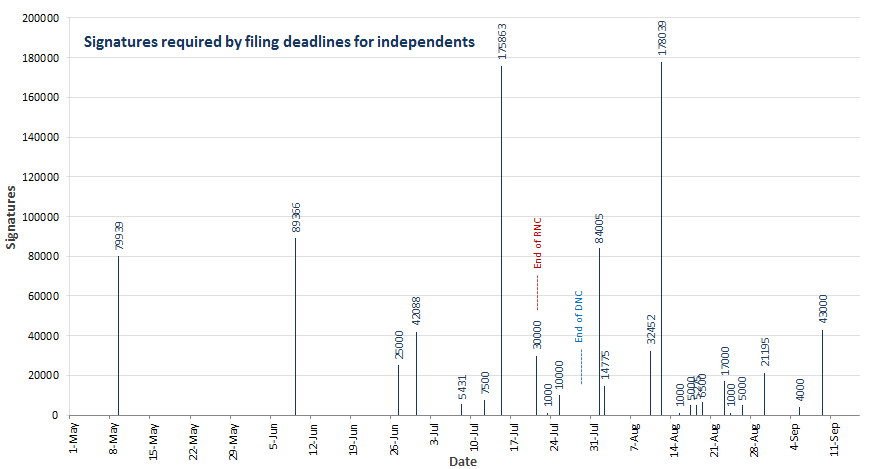 This means, as Bill Galston points out, “…there is a delicate timing issue.” Galston continues, “Right now is not too late to mount an independent candidacy, but it will be when the Republican Convention convenes in late July. So this venture would have to be launched well before the identity of the party’s nominee is known.”

An independent candidacy for president is not out of the question after all. But whoever is thinking about it needs to get started—yesterday.