With NASA reporting that 2015 is on track to be the hottest year on record for Earth and as parts of the Western United States are gripped by extreme drought, Americans are less likely than at any time since 2008 to say there is not solid evidence of global warming. The latest results of the National Survey on Energy and the Environment (NSEE) from the University of Michigan and Muhlenberg College finds that only 16% of Americans believe that solid evidence of global warming over the last four decades does not exist. This is down from 33% just 18 months ago (Figure 1).

Figure 1: American views on the existence of evidence of global warming,
2008-2015

Question: “From what you’ve read and heard is there solid evidence that the average temperature on earth has been getting warmer over the past four decades?”

The NSEE results show that the presence of severe droughts in the United States is having a strong effect on individual acceptance of a warming planet. In all, 61% of Americans who believe that global warming is occurring reported that severe droughts in parts of the United States are having a very large effect on their conclusion that global warming is happening (Figure 2). This is twice the level reported just over 2 years ago. Drought has also surpassed declining polar ice and glaciers as the factor most likely to be reported by Americans as having a very large effect on their conclusion that strong evidence of global warming exists. As might be expected, those living through the historic drought conditions in the West are the most likely to say that drought is strongly influencing their acceptance of global warming. Over 7 out of ten westerners who think global warming is happening stated that severe droughts were having a very large effect on their views, compared to only about 6 out of 10 Americans living in the South or Northeast and half of residents living in the Midwest.

Figure 2: The effect of severe droughts across the United States on an individual’s view that earth is getting warmer by region

But as fewer Americans reject the existence of global warming, consensus on the subject is lacking. Large divides remain regarding the causes of increasing temperatures, even among those who believe the climate is changing. Only 39% of those who believe there is solid evidence that the climate is changing indicate that the warming is caused by human activity, with an additional 37% stating that the increases in temperature are being caused by a combination of human and natural causes (Figure 3, right graph). When looking across all Americans this means that just over half (54%) of the nation thinks that global warming is happening and humans are at least somewhat the cause, with the remaining 46% either rejecting or unsure about the evidence of global warming or attributing increases in temperatures to natural causes (Figure 3, left graph). 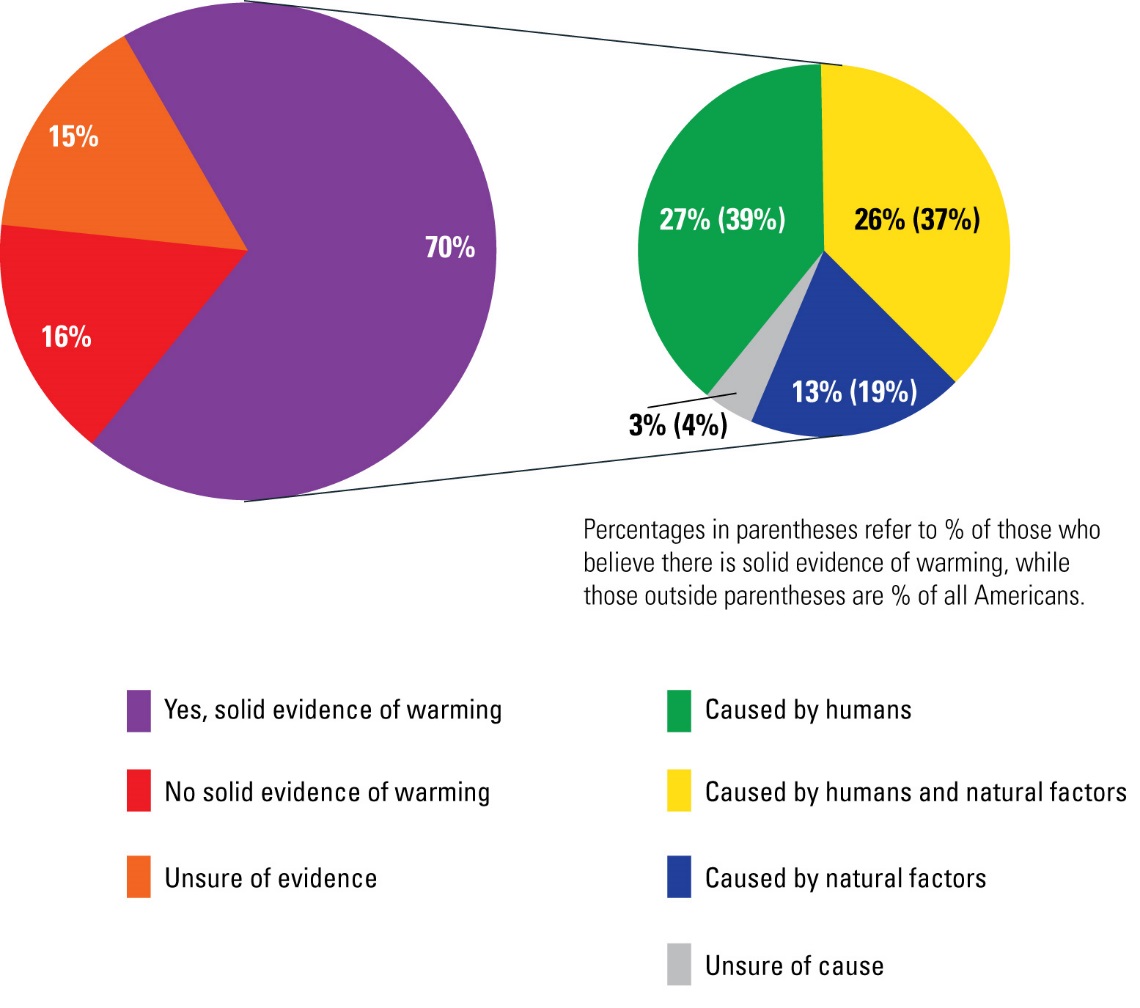 Question: “From what you’ve read and heard is there solid evidence that the average temperature on earth has been getting warmer over the past four decades?” And “Is the earth getting warmer because of human activity such as burning fossil fuels, or mostly because of natural patterns in the earth’s environment?”
N = 911

The divergent opinion about what is causing global warming significantly impacts willingness to pay for actions that reduce greenhouse gas emissions. Very few Americans (16%) that think humans are causing global warming would pay nothing to address the problem, and as many as 9% of this group are willing to pay more than $250 each year for mitigation efforts (Figure 4). Conversely, much larger portions (43%) of those that think natural causes alone are causing temperatures to rise are unwilling to pay anything for measures that are designed to address global warming.

Figure 4:The relationship between perceptions of evidence of global warming and willingness to pay for actions to address global warming

Christopher Borick is Professor and Director of the Muhlenberg College Institute of Public Opinion and Co-Director of the National Surveys on Energy and Environment.

Sarah Mills is a post-doctoral fellow at the Center for Local, State and Urban Policy (CLOSUP) at the Gerald R. Ford School of Public Policy.

The political ramifications of these findings are significant, with a closer look at Republicans providing some insight. Currently, 56% of Republicans believe that there is solid evidence global warming, up 9% from a year ago. However, only about 1 in 3 believe that humans are at least partially responsible for the increased temperatures (Figure 5). 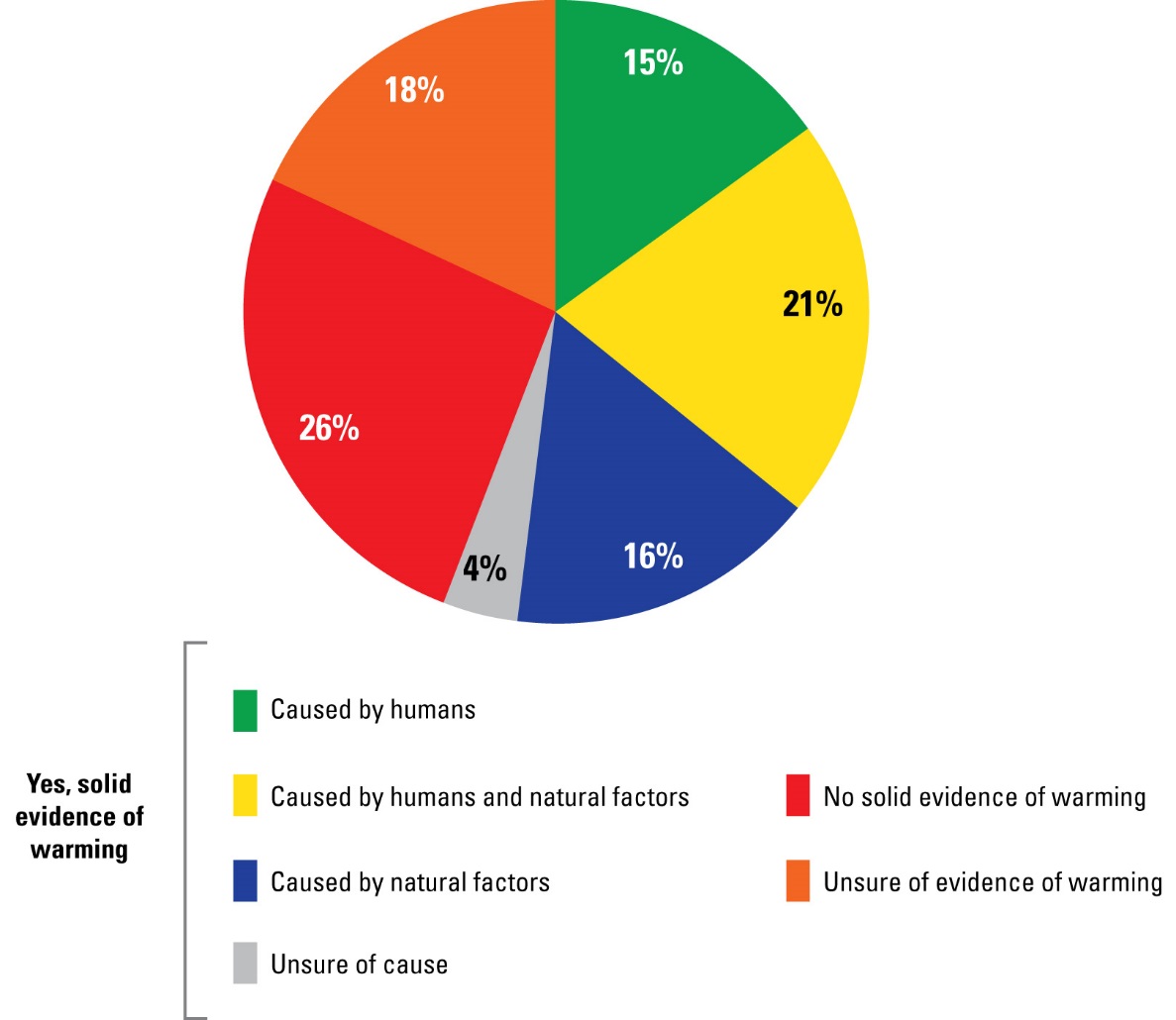 Question: “From what you’ve read and heard is there solid evidence that the average temperature on earth has been getting warmer over the past four decades?” And “Is the earth getting warmer because of human activity such as burning fossil fuels, or mostly because of natural patterns in the earth’s environment?” N=213

Such findings help explain the current pivoting of many Republican presidential candidates away from outright denial about the existence of global warming to more nuanced positions in which there is quiet acknowledgement of rising temperatures but very little by way of policy proposals. Marco Rubio has staked out such a position where he has acknowledged a changing climate, attributed such changes largely to natural cycles, and argued that we should do nothing to reduce greenhouse gas emissions because it would achieve no environmental benefit and risk damaging the U.S. economy. Other candidates like Ted Cruz may continue to claim the “skeptic” moniker, aligning with the non-trivial portion of the Republican base that remain doubtful about global warming existence (31% of “very conservative” Americans in 2015). Nonetheless, the Rubio model may become the dominant approach used by GOP leaders going forward given these shifts in public opinion.