The EPA’s final Clean Power Plan is radically different from the version proposed a year ago, with big consequences for which states will face the most costly paths toward compliance in 2030.  Whereas the proposed rule gave coal-dependent states a break in many ways, the final rule does not, and that means that those states—generally already hostile to the rule—now face a much more difficult task in complying with the rule.

Understanding the derivation of the state targets in the proposed Clean Power Plan, released in June 2014, was hard work—we gave explaining the EPA’s method a shot here at FixGov.  The results of that opaque method were somewhat clearer: states that emitted the most were generally asked to do the least.  As I argued repeatedly, that situation created fairness concerns that were destined to undermine the rule’s political foundation, as states overwhelmingly thought they were being treated unfairly.

Though the new rule is complex and thick (1560 pages in its current typeset) enough to make understanding its ins and outs a challenge, the basic structure is much more straightforward than in the proposal.  Basically, the EPA has set carbon emissions standards for two types of plants: for fossil fuel-fired steam generating units, 1305 lbs CO2/MWh, and for stationary combustion turbines, 771 lbs CO2/MWh.  (Where they got those numbers is sure to be controversial, both legally and politically, and will be the subject of a future post here—but let’s put that aside for now).  Now each state’s target is set by looking at a weighted average of their current (2012) fossil fuel-fired electrical generating units and imposing those emission standards.  States must devise their own plans to reach those targets, using just about any combination of measures they see fit, as well as preparing federally enforceable fallback plans to regulate each plant directly.  Vexing questions, including some about the puzzling treatment of nuclear energy and the role of energy efficiency measures, have been resolved by deriving the rule’s targets much more directly from the mix of fossil fuel emitters. 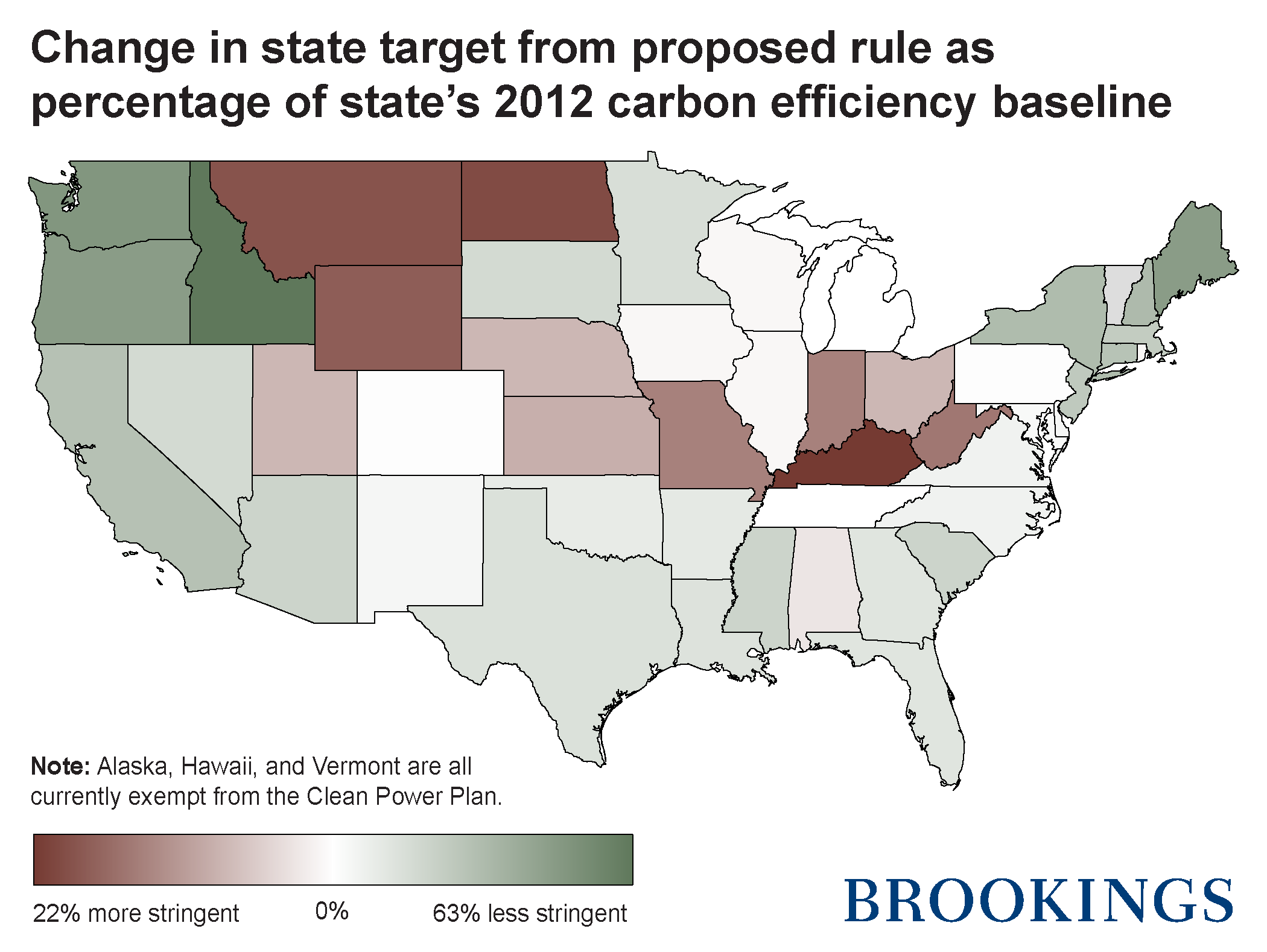 The new mix of targets is far easier to defend as equitable—which of necessity means it is much harsher on states that have done less to move toward carbon efficient energy production to date.  For a great many states (those shaded in green), that actually means that their 2030 target in the final rule is less stringent than it was in the proposed rule.  For other states (those shaded in red), they will have to do considerably more than originally proposed.  That includes Kentucky, the home state of the leader of the “just say no to the Clean Power Plan” strategy, Senate Majority Leader Mitch McConnell (R).  Last year’s proposal asked the state for just a 19 percent reduction in carbon intensity by 2030 (relative to its 2012 baseline), but the final rule demands a 41 percent cut.  On the other end of the spectrum, Idaho was originally tasked with becoming 73 percent more efficient by 2030, but in the final rule must only get 10 percent more efficient than its baseline—easily achievable under business-as-usual conditions for the hydro-heavy state.

It was possible to see the proposed rule’s targets as politically accommodating to those parts of the country that have shown little interest in improving their carbon intensity; but the final rule’s targets do quite the opposite.  That’s easy to see in the following map, which shows the proportional improvement in carbon efficiency each state is required to make (relative to 2012 baseline) by 2030. 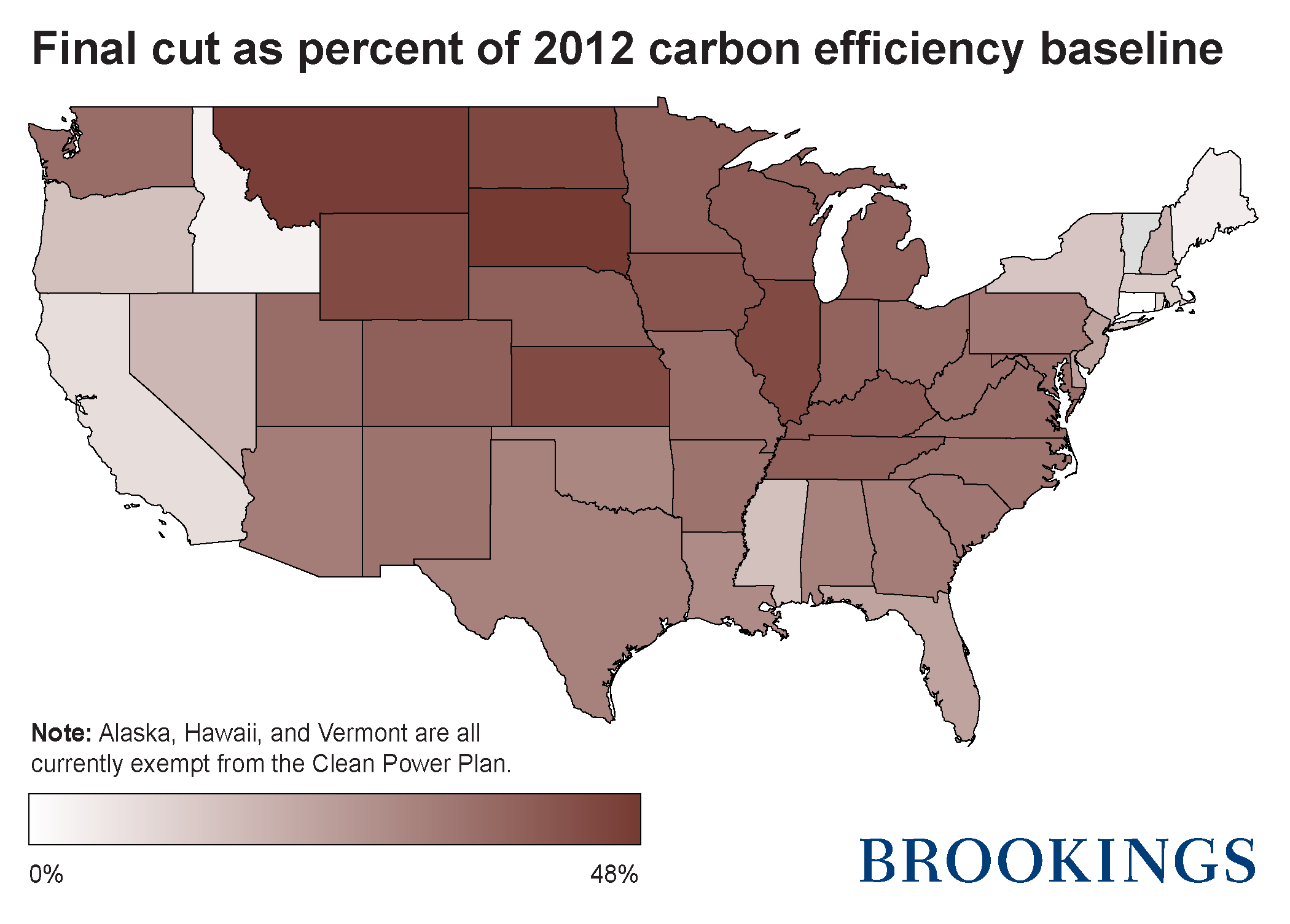 Roughly speaking, states that have already taken many actions to improve their carbon efficiency (especially embracing renewables and natural gas) are tasked with smaller additional reductions (e.g., California, states in the Northeast), while states that have done less and are still more coal-dependent are asked to do more (e.g., Illinois, Montana, North Dakota).

That makes plenty of intuitive and economic sense, but it is sure to make certain states dig in their heels against the rule politically even more than they already were.  EPA may well have decided that their opposition was a certainty in any case, so that the extra requirements won’t generate any extra enmity.

Stay tuned here for future posts about the final Clean Power Plan’s legal future and more about its political ramifications.

Chigozie Nweke-Eze and Rainer Quitzow
Tuesday, May 10, 2022
Get daily updates from Brookings