At 77 years of age, the federal minimum wage deserves a respite from the day-to-day combat of political life. Today, protestors around the country are demanding a $15 minimum. But few observers think this level is economically desirable: even fewer think that it is likely.

Democrats want a higher minimum, and say so loudly. Republicans of a free-market persuasion mostly do not—but tend to stay silent because they know that swing voters look positively at raising the wages of low-earners.

The minimum wage is lagging…

Congressional political stalemate has meant the U.S. wage floor has lagged behind median earnings. In contrast wage growth in other OECD countries has performed much better, as this graph produced by the Hamilton Project shows: 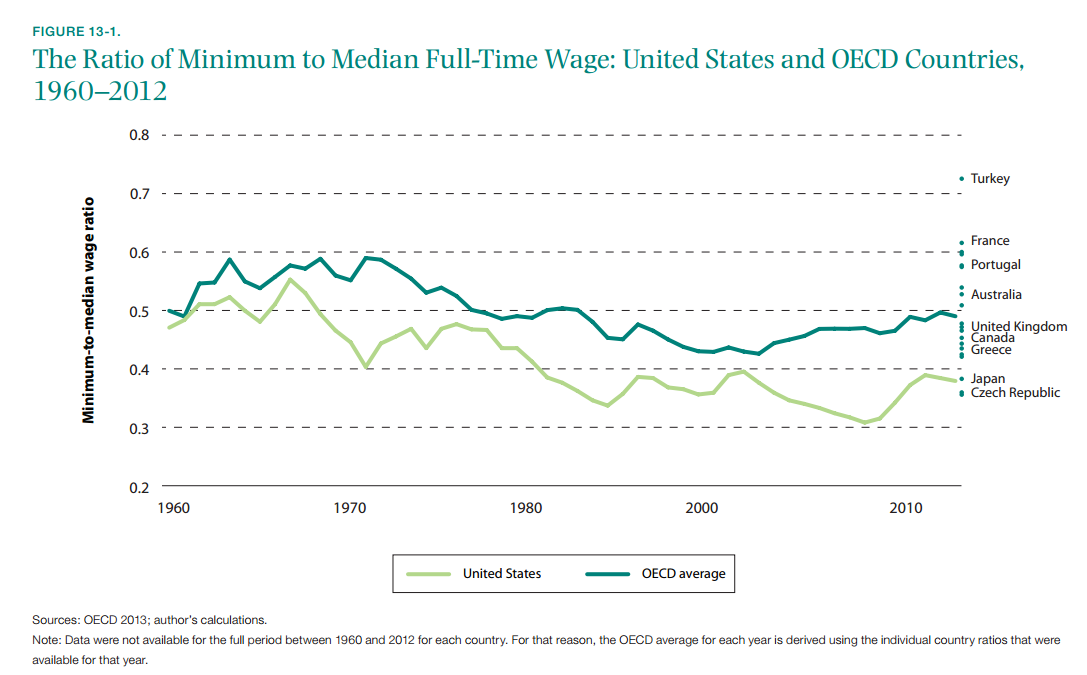 The federal minimum wage is an established piece of the U.S. policy furniture—and one that is quite dated. It now makes sense to consider taking some of the power and responsibility for setting the wage rate out of the hands of politicians—just as interest rates are set by the Federal Reserve.

Over in the U.K., the Conservative Prime Minister David Cameron just jacked up the national minimum wage by 3% up to £6.70, with barely a squeak of protest from employers or the right wing of his own party. Why? Because, like his two predecessors, he simply followed the advice of the Low Pay Commission, which is comprised of nine commissioners—three each from trade unions, employer organizations and academia.

Two options for taking the political heat out of the U.S. minimum wage

1. A Federal Minimum Wage Advisory Board. This could be made up (like the U.K. version) of nine members: three representatives of employer organizations, three from labor organizations, and three independent labor economists. The Board would recommend a rate for the national minimum wage each year, which would then be enacted by Congress in the usual manner. The Board would have a strong incentive to set a rate likely to be adopted by Congress, in order to establish and maintain its reputation: there is, after all, little point in sitting on a Board that is ignored. The Board’s recommendation would not be binding and would not become the legal ‘default’ level. But because the advice is likely to be sensible, Congress would likely be inclined to follow it.

These are both examples of what I have called policy commitment devices—in a new paper, Ulysses Goes to Washington—that help to overcome political myopia in order to support longer-term policy objectives. In the first case, taking advice from an independent commission, the commitment is somewhat less binding, although as James Madison knew, ‘the counsels and checks of friends’ can carry plenty of weight. Indexation would be a tighter form of binding, since inaction on the part of politicians would lead to an uprating of minimum wage, rather than the current stasis.

For both sides, there are political attractions to sub-contracting some decision-making power over the minimum wage. By accepting the advice of an independent body or allowing indexation to do its silent work, Republicans can keep their business donors and right-wing critics at bay; Democrats can do the same for unions and the political left. Sometimes the most powerful thing politicians can do is give some power away. The minimum wage is now perhaps a case in point.