I uncovered this doodle, dated from January 10, 1961 in the Eisenhower Archives last fall. At that time, I was an Eisenhower speechwriter at the White House, and the principal drafter of the 1961 SOTU. 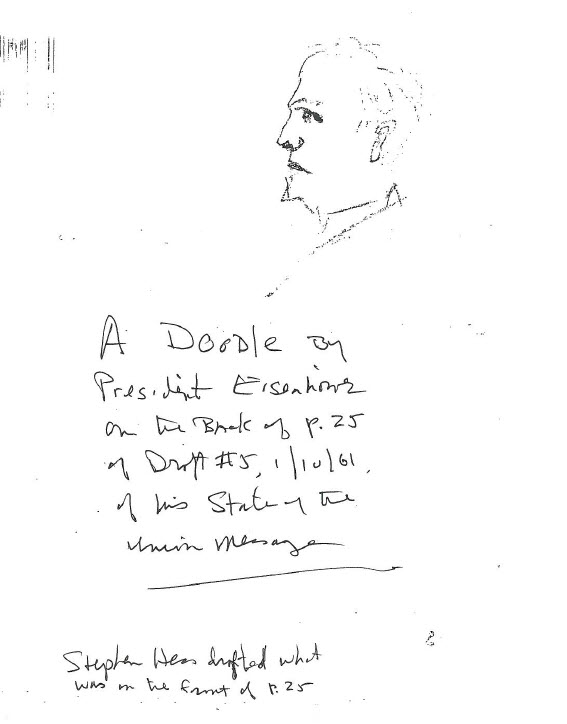 The message would be “transmitted” to Congress, not delivered in person, so bulk was not a drafting consideration. Indeed, this SOTU covers 18 pages of the Public Papers of the President.

The odd history that I was seeking to verify for my own amusement was that the message—at least 70% of it—initially had been written for the Republican Platform committee in May, 1960, with “data” simply undated.

I was surprised to discover my draft would have a more profound impact on Eisenhower’s legacy.

Ike’s record on civil rights, at least I thought as a young man at the time, was a troubling separation between deeds and words. The deeds could be stunning, as when the President sent troops to Little Rock.  But the words were framed as legalisms rather than matters of morality, as in his statement on the Brown decision: “The Supreme Court has spoken and I am sworn to uphold the constitutional processes in this country, and I will obey.”

The words offered by the President in the civil rights section of his SOTU were “This pioneering work in civil rights must go forward. Not only because discrimination is morally wrong, but also because its impact is more than national—it is world-wide.”

I never found out why Ike doodled on the back of page 25, but I did learn how Ike wished to be remembered as he shut the door on his presidency and headed home to Gettysburg.