The usual explanations for the Democrats’ drubbing in this year’s mid-term elections have focused mainly on the lopsided number of Democrats up for reelection, especially in red states, low turnout among important parts of the Obama coalition, and the President’s depressed popularity. But there’s also one very basic and underlying issue that played an important part not only in this year’s GOP wave, but also in the Democratic landslides in 2006 and 2008, the last GOP wave in 2010, and the Democratic sweep in 2012. What has happened to the incomes of middle-class Americans?

In a forthcoming report from Brookings, we will trace the income paths of several “age-cohorts” of Americans as they aged over the last 35 years. For a long time, the direction of that path was given: Average Americans could and did improve their economic lot simply by working hard, year after year. Certainly, that’s precisely what happened in the 1980s and 1990s. Using new Census Bureau data, we can now track the median income of age-cohorts as they grow older—for example, the incomes of those age 25 in 1980 when they turn 35 in 1990 and 45 in 2000. Those data tells us, for example, that the median real income of households headed by people ages 25-to-29 in 1982 rose from $44,785 in that year to $60,927 in 1992 and $76,427 in 2002—income gains 3.5 percent per-year, year after year for 20 years. 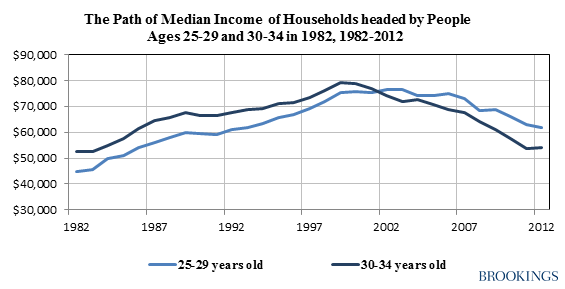 Now, income gains usually slow sharply when people reach their mid-to-late forties and older. So let’s look at the income paths of households headed by people ages 25-to-29 in 1991 and people ages 30-to-34 in 1991. Again, we see their incomes rising sharply and steadily through the 1990s, and stalling out from 2000 or 2002 until the present. 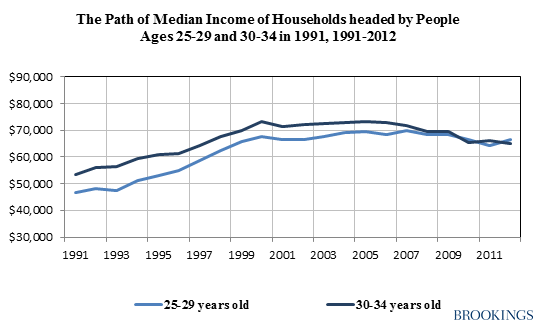 We also constructed the income paths of age cohorts by the gender, race and ethnicity, and educational levels of their household heads. Income differences based on race and ethnicity have not changed much since the early 1980s—which tells us households headed by whites, blacks and Hispanics have made roughly comparable income progress for the last 35 years. In the case of gender, incomes grew much faster for female-headed households in the 1990s than male-headed households, but that dynamic was reversed for the last decade.

These trends have enormous electoral consequences. They explain why, in recent years, overall positive economic numbers and growth are not translating into feelings of shared prosperity. That’s why so many Americans are angry and ready to turn on whichever party has most recently failed to restore the broad income progress that almost everyone experienced in the 1980s and 1990s.