Today eight states will hold their congressional primaries. There are some similarities between today’s races and those we have had every Tuesday for several weeks, and in other ways they are profoundly different. The talk so far this cycle involves the divide in the Republican Party between Tea Partiers and the establishment. Today is no different. As the chart below shows, among the Republican challengers in today’s congressional primaries, 41 are affiliated with the Tea Party or are libertarians; 45 are classified as pro-business Republicans. From New Jersey to California, from Montana to Mississippi, the battle for the heart and soul of the Republican Party continues to play out. 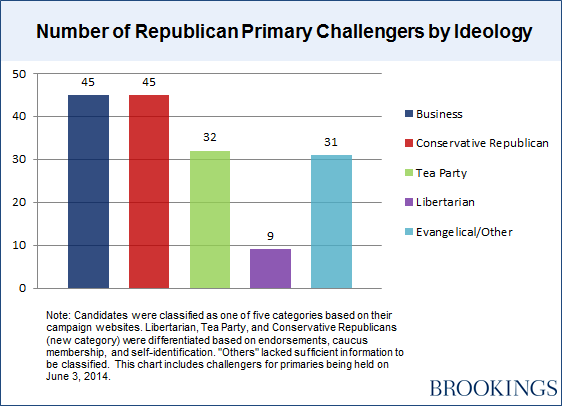 However, two states are facing curious environments that may have broad national implications. A Senate race in Mississippi has been one of the most brutal, muddy races of the cycle thus far—and may well reign supreme in that category when all primaries are finished. In California, a unique primary system has a variety of races that look nothing like the other primaries held today—or any day. So, let’s dive into these primaries.

Mississippi & The Death of Southern Gentility

In Mississippi, incumbent, six-term Senator Thad Cochran is facing off against a young, tea party-backed newcomer, Chris McDaniel. McDaniel has made Cochran’s long tenure in Washington and support for federal spending issues in a campaign where Cochran’s conservative bona fides have been questioned. Cochran, meanwhile, has embraced his record, arguing that his tenure and his ability to bring home the bacon has been both a tremendous asset to Mississippi—one of the nation’s poorest states—and is a reason to return him to office.

In many ways, the Cochran-McDaniel race is the archetype of the internal GOP struggle. Cochran is conservative, but traditional by Southern Senate standards. He comes from a long line of Senators from Mississippi and neighboring states with a strategy: accumulate seniority and translate that power into federal funds for constituents.  For nearly a century, this strategy was broadly successful. For example, since 1914, Thad Cochran’s Senate seat has only been held by four men—including Cochran. The state’s other Senate seat has only been held by five men since 1923. Longevity is not just a standard—it is an expectation.

However, as the Tea Party has turned preference for political pork and time spent in Washington into liabilities, people like Cochran have become vulnerable.

In an odd twist, race turned nasty when Tea Party activists allegedly snuck into a care facility to take unauthorized (and illegal) photos of Cochran’s ailing wife who has been hospitalized for over a decade and suffers from a form of dementia. The fight for the Republican Senate nomination went from a battle over political views to a battle over personal attacks. Mississippi demographically and ideologically may well be one of the most welcoming places for a Tea Partier to unseat an entrenched incumbent, and today Mississippians will decide—in the shadow of a very disturbing criminal investigation involving the rights of the infirmed—whether pork or principles will win the day.

The Jungle out West: The California Primaries

In most states, primary day means the same thing. Democrats face fellow Democrats; Republican battle fellow Republicans. The lucky ones run unopposed, often to face off an opponent of the other party in the general election in November.

California is starkly different. After voters approved Proposition 14 in 2010, California (starting in 2012) began a new system of congressional primaries. Any candidate from any party (or with no affiliation) runs in the same blanket primary. The top two vote-getters face off against each other in the general election in November.

This system can create some very odd outcomes, and the 2014 cycle is no different. As the chart below shows, in 43 congressional districts, at least one Democrat will face at least one Republican. In many races, multiple Democrats will face multiple Republicans, as each scrambles to win the most votes among candidates with various positions and ideologies. 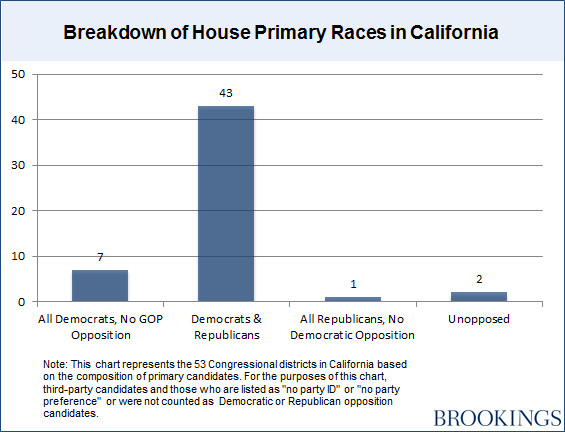 For example, there are more than a dozen candidates running in the race to replace retiring Rep. Henry Waxman (California’s 33rd district).  They include three Republicans, numerous Democrats, a Green Party candidate, a Libertarian, and others with no affiliation. The outcome could be a traditional Democratic-Republican matchup in November. Alternatively, two Democrats may well face off in the general election.

In the 35th congressional district, Gloria Negrete McLeod announced she would not seek reelection to her Los Angeles County seat. In her place, four Democrats are running in today’s primary guaranteeing that the general election matchup will be between two Democrats.

The new primary system was heralded as a means of moderating polarized politics, and forcing candidates to cobble together unique electoral coalitions in their pursuit of office. Although some research has sought to evaluate the effects of this new system, it has only been used in one prior congressional primary (2012). After today and the general election in the fall, researchers will have a variety of additional data points to try to figure out whether the blanket primary in California helps, hurts, or has no effect on the ideology of candidates. In the mean time, California voters in dozens of congressional districts will see ballots that look like few others in the US and will unknowingly be part of a grand democratic experiment.