Everyone shudders at the prospect of being audited by the IRS. But audits are an integral part of making sure that everyone pays their fair share of taxes. Thus recent reports that IRS auditing is slowing down in the face of budget cuts are cause for concern. With an estimated tax gap of $450 billion, tax enforcement should concern deficit hawks, big spenders, and all Americans who honestly report their income.  A lower audit rate harms the IRS’s ability to collect revenues.  Frankly, instead of fearing audits, the vast majority of Americans who try hard to pay their taxes accurately should embrace auditing and demand the IRS do more of it!

Chart 1 shows the IRS enforcement coverage rate. Specifically, this rate measures the number of audits relative to the number of returns filed. In some sense, it is a per capita measure of IRS enforcement activity. It, too, shows a decline in the rate of auditing. In fact, since a peak in 2011, auditing has dropped from 1.11% to 0.96% (a 13% decrease in the audit rate).

Why the Decline in Auditing?

It should come as no surprise that auditing has declined in the IRS. The agency—like many others—has faced budget cuts and targeted staff reductions over the past several years. Chart 2 shows IRS funding by year. The congressional appropriation increased until FY2010. Starting in FY2011, IRS funding began to decline. Between FY 2010 and FY2013, the agency’s budget was reduced by about 8%. 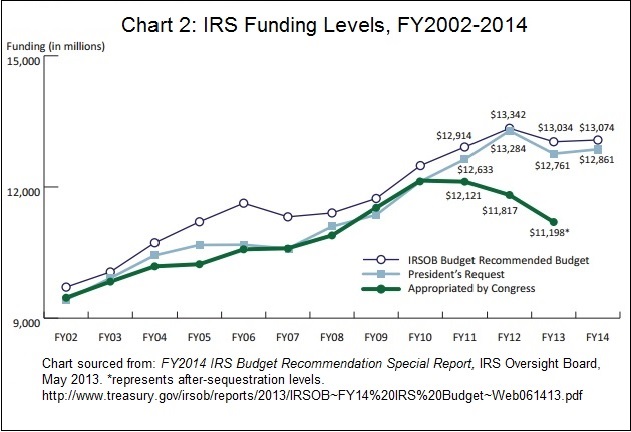 However, those reductions were not always spread evenly across the agency. In many cases, those reductions hit specific activities harder than others. Recently, IRS Commissioner John Koskinen explained that because of the structure of IRS programming, recent budget cuts were targeted towards technology, customer service, and enforcement.

Chart 3 shows the Commissioner’s words in action. As budget cuts began after FY2010, the number of key enforcement personnel declined. From a high of 22,710, IRS slashed its enforcement personnel to 19,531 in FY2013—a 14% reduction. These officials serve at the front lines of stopping tax evasion and tax fraud and work to ensure the federal government receives the tax revenue it is due. It is this group that has been hit hardest by budget cuts and helps explain why there have been a reduction in both number and rate of audits.

The Consequences of Reducing IRS Enforcement

Overall, reducing IRS enforcement comes at a cost, as we have noted on FixGov blog previously. In general, reducing the staff and resources for IRS enforcement can cause upward pressure on the deficit, as it reduces the ability for the government to collect tax revenue. In fact, the number of key IRS enforcement personnel and the level of revenue collected through audits correlates at about 56%.

However, in some capacity, the IRS can sometimes do more with less. For example, despite a decrease in agency funding between FY2012 and FY2013, the revenue collected through enforcement activity increased slightly. How is this possible?

First, IRS has spent decades improving its technological capabilities to identify efficient and effective ways to recoup the revenue the government is owed. Those benefits accrue over time. Second, a recent GAO report showed that different IRS enforcement activities have dramatically different returns on investment. GAO noted that the four general auditing mechanisms—Automated Underreporter Program, Automated Substitute for Return Program, Correspondence Examinations, and Field Examinations—vary in terms of the cost of each and the revenue generated from each. As a result, returns on investment can range from $1.80 per dollar spent (Field Examinations) to $31 per dollar spent (Automated Substitute for Return Program).

Given variations in enforcement activity and their prospective payoff, changes in IRS funding can mean a change in the types of enforcement activities the agency pursues, as they try to maximize revenue collection. In some years, like FY2013, it can lead to promising results. In other years, IRS collects less and less revenue, increasing the unrealized tax gap.

The GAO report noted two important items about IRS enforcement policy.  First, IRS should shift funds from low-return to high-return areas in order to conduct more audits. Second, the agency needs to commission a study that examines the marginal benefits of additional audits across the different categories in an effort to maximize revenue collection. Specifically, IRS needs better data on how much funding is necessary to conduct the maximum audits up to the point at which the next audit is cost ineffective—the marginal case. All of this, however, requires additional IRS funding—not less.

Even though increasing tax enforcement is good public policy, reflects a commitment to the rule of (tax) law, and is healthy for budgeting, it is unlikely to happen. First, there is little public support for such action. What politician will run on the platform “More Audits for Americans”? Despite the clear benefits, the political costs of such efforts make them unappealing.

Second, given recent scandals about political efforts within the IRS, the agency has positioned itself poorly to advance this cause. As Congressional committees continue to investigate whether politics influenced enforcement decisions regarding political action committees, calls for increases in IRS enforcement funds will be met with a firm “no.” Even allowing the agency more discretion in budget allocations or enforcement actions, which are arguably necessary for collecting taxes more efficiently, will be eyed with suspicion given the agency’s recent troubles.

But deficit hawks in Congress should take note and consider changing their perspective on funding.  The “tax gap” accounts for a substantial portion of the current annual deficit.  Spending to close it is sound spending.