Will the Democrats lose control of the Senate this November, as Nate Silver and many other analysts believe?  Guy Cecil, the Executive Director of the Democratic Senatorial Campaign Committee (DSCC) says no, and he could be right.  After all, he points out, Silver was not infallible forecasting in the 2012 Senate races.  As late as August, Silver saw a 61% likelihood that Republicans would emerge with a majority, but Democrats ended up winning 55 seats.

Still, there’s a difference between questioning Silver’s past track record and making an affirmative case about what’s to come.  Cecil’s optimism about 2014 doesn’t command a lot of confidence.  Consider the following:

“We’re going to hold the majority again in November because Democrats are fighting for the middle class and Republicans are fighting for Washington special interests like the Koch Brothers, the Tea Party, and their reckless and irresponsible agenda that voters despise.”

“In each of the competitive senate races, there’s a crystal clear contrast between a Democratic candidate who is focused on creating opportunity for the middle class and is willing to disagree with their own party when they think it is right for their state and a Republican candidate who is beholden to the Tea Party, the Koch brothers, and a small group of right-wing billionaires who support an agenda that is dangerous for the middle class.”

Arguments of this sort (and there are more like them in Cecil’s memo) are unlikely to persuade anyone who doesn’t already believe them.

Pessimism about Democratic prospects this November rests mainly on the macro-environment of the election.  President Obama’s approval rating is mired in the low 40s, as is public approval of the Affordable Care Act.  (According to the most recent Pew survey, intense opposition to the ACA stands at 41%, versus only 26% intense support.)  Nearly 6 in 10 Americans believe that we’re still in a recession, and optimism about next year’s economy has waned. Wages are flat, and incomes for average households languish well below pre-recessions levels.  Indeed, the median household income is substantially less than it was at the official end of the recession in mid-2009.

Republicans seem to have a strategy for 2014: steer away from issues that divide the base, avoid nominating unelectable yahoos, and focus relentlessly on public discontent about the ACA.  Meanwhile, Democrats are at odds over the Keystone pipeline, and Latino frustration over deportations and the lack of progress toward immigration reform is spilling over into public protest, some of it directed at the president.

The state-by-state environment for the election doesn’t look a lot brighter.  Consider the races where the results don’t seem foreordained—9 seats now held by Democrats, 2 by Republicans— in the context of President Obama’s approval ratings: 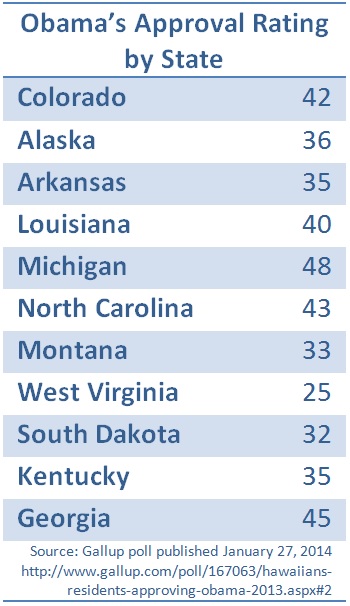 The President’s state-by-state approval ratings, by the way, reflect the average for 2013, a period during which the president’s national average was about 4 points higher than it is today.

In the face of this, the case for Democratic optimism comes down to four propositions:

In other words, candidates and mechanics can trump the context of the election.  It has been known to happen, and history might repeat itself.  If it does, the DSCC and its leader will be showered with well-deserved kudos.  Still, it’s not the kind of bet that’s likely to make you rich.