The first Monday in February is budget day—at least according to U.S. law. Congress ought not to hold its breath, as the President’s budget will surely be late again this year. But as Congressional Republicans gear up to criticize the President, they should remember that old saying about people in glass houses throwing stones. Just as the law says that the President should send a budget to Congress in early February, it also says that Congress should finish its appropriations bills by September 30—the end of the fiscal year. As the chart below shows, Congress hasn’t done that very often lately either. Over time, Congress has relied less on appropriations bills to fund government operations (decreases in red bars to the left of the table)and increasingly on blunt measures—continuing resolutions—that fund the government for shorter periods of time (increases in blue bars to the right of the table). They’ve met their annual appropriations deadline only four times since passage of the Budget Reform Act of 1974 and shut down the government multiple times. 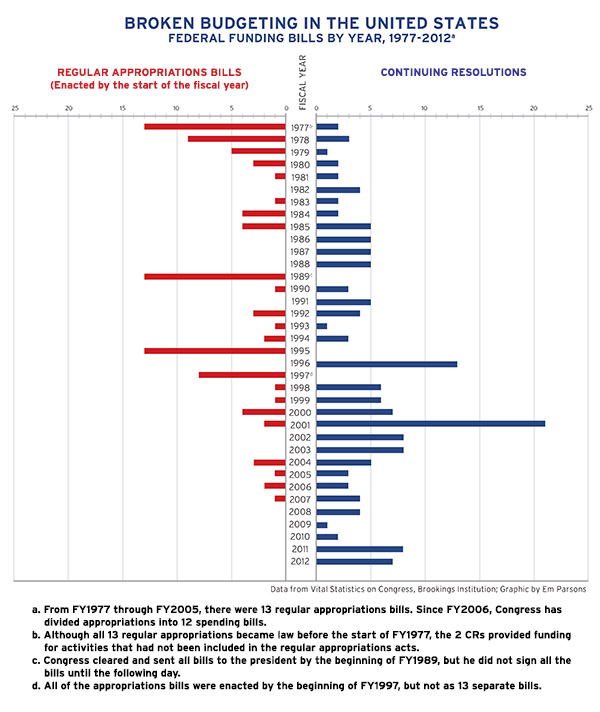 In fact, as we mark the budget day that isn’t, the whole government seems to be in the midst of an incredible failure to budget. So maybe it’s time to rethink the budget process?  The last time that happened was in 1974. Following President Nixon’s attempts to get around laws he didn’t like by impounding funds, Congress took on the whole budget process and put in place a law that exists to this day—albeit with amendments.

So today FixGov is beginning a series on reforming the federal budget. We’ll start with our own Phil Wallach who gives us some insight on why cutting waste, fraud and abuse is a lot harder than it looks. As the week goes on we’ll have further commentary from scholars inside and outside Brookings. Our goal? By the time there’s a budget, maybe we can get a conversation rolling about budget reform.