Citizens of healthy democracies routinely use protests and acts of civil disobedience to alleviate injustices. While these tools may be successful in the long run, in the short run they impose additional burdens on already vulnerable populations and neighborhoods: protestors are arrested, local economic activity is disrupted, and so on. In other words, social movements that use protests and civil disobedience to create change can be viewed as costly investments in the future rights and opportunities of disenfranchised communities. However, an additional cost of civic unrest—disruptions to schools and student learning—might be borne by a particularly vulnerable subset of historically disadvantaged populations: children.

Understanding how and when civic unrest harms student learning is crucial for educators, parents, community leaders, and policymakers looking to support students in affected communities by implementing programs that support and facilitate student learning during episodes of civic unrest. Addressing these questions is important for at least two reasons. First, protests and civic unrest in response to police shootings are increasing in frequency in cities across the U.S., particularly in historically disadvantaged African American communities. Second, education can play an important role in improving health, civic engagement, and earnings; reducing crime; and facilitating upward socioeconomic mobility more generally.

Of course, uncovering the causal relationship between civic unrest and student learning is difficult precisely because episodes of civic unrest are not randomly assigned to communities. It is therefore difficult to disentangle the impact of civic unrest from the impacts of other community characteristics. We attempt to circumvent these challenges in a new IZA Discussion Paper that estimates the impact of the civic unrest experienced in Ferguson, MO on student achievement that erupted after the police shooting of an unarmed black male, Michael Brown, in August of 2014. The timing of events in Ferguson facilitate a quasi-experimental analysis that can be given a causal interpretation. Specifically, the Ferguson area experienced a series of intense protests and riots just weeks before the start of the 2014-15 school year after Brown was shot and killed by police. A low level of unrest persisted in the area over the course of the 2014-15 school year, with occasional eruptions of renewed violence and standoffs coinciding with new developments in the case and with related events elsewhere in the country (e.g., the Baltimore riots). Students in Ferguson-area schools were therefore exposed to elevated degrees of stress and civic unrest for the duration of the 2014-15 school year, relative to previous school years.

Since Ferguson-area schools systematically differed from other schools in the state prior to the civic unrest experienced in 2014-15, we explicitly account for those pre-existing differences by using other schools in the broader St. Louis area (MSA) as a control group in this natural experiment using difference-in-differences and synthetic control methods that exploit data going back to 2010. Intuitively, we show how differences in student achievement between Ferguson-area schools and their counterparts in the broader St. Louis area, which were approximately constant in the pre-unrest years (2010-2014), significantly changed in 2015. This departure from a historic trend is arguably interpretable as the causal effect of the civic unrest in Ferguson.

This main result is apparent in a simple plot of raw data: 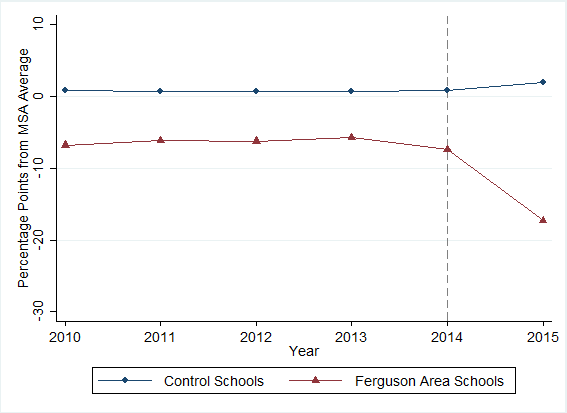 This figure plots the percentage of “high needs” students in both “treated” Ferguson-area schools and “control” schools who scored at or above the “basic” level in state math exams that were administered in the spring of each school year, relative to the statewide mean.[1] Five facts are apparent:

Together, these facts suggest that something, likely the sporadic, intense bouts of civic unrest, affected student performance in Ferguson-area schools in 2015 but did not affect other schools in the St. Louis area. More sophisticated econometric techniques, reported in the paper, bolster this interpretation by controlling for changes in school compositions and resources, unobserved, time-invariant school characteristics, and so on. Our preferred estimates (reported in Table 2 of the paper) find that the unrest in Ferguson decreased the fraction of high-needs students scoring at or above basic in math and reading by 11 and 7 percentage points, respectively. These effects were concentrated in elementary schools. We find smaller effects in middle schools and no effects in high schools.

Regarding mechanisms through which acute civic unrest might affect student achievement, similar analyses find that the unrest in Ferguson caused a significant decrease in student attendance (specifically, the rate of chronic absence increased by about 5%). Once again, this effect was concentrated in elementary schools, providing additional support for a causal interpretation of the relationship between civic unrest and student achievement. One possible explanation for this is that parents held children, particularly younger children, home from school due to safety concerns.

These results highlight the potential benefits of local and state programs that respond to civic unrest and similar disruptions to schools. For example, providing additional resources, support, and guidance to affected schools and communities might reduce the harm to achievement associated with such events. Carl Weems of the University of New Orleans and his coauthors describe one school-based intervention that reduced test anxiety in a predominantly black sample of students who were exposed to Hurricane Katrina. This type of reactive policy and support would be further justified by the fact that the civic unrest in Ferguson occurred in what were already relatively disadvantaged, low-performing schools.

Disruptions to learning and reduced student achievement are one potential cost of protest movements that can and should be minimized. Things need not get worse before they get better.

Beyond Deng and Richard V. Reeves
Thursday, March 17, 2022
Get daily updates from Brookings