“This must stop,” a Maryland principal recently implored in a mass email.  “Parents, find another way to bond with your children.” A principal feeling compelled to remind parents not to allow underage drinking parties at their homes contradicts the usual stereotype these days of aggressive, overachieving parents pushing principals and teachers to help their children get into top colleges. But both stereotypes coexist uncomfortably as the enduring legacy of baby boomer parents. The mixed messages many modern parents convey to their kids confuse educators too.

In today’s relaxed, anything-goes era, middle-class and upper-middle-class parents’ obsession with befriending their kids and cultivating self-esteem undermines parental and educational authority.  Yet, at the same time, the helicopter parents hovering over students and teachers are becoming bulldozer parents—often heavy-handedly trying to clear a path for their kids. While many children oscillate between feeling neglected and smothered, many teachers waver between bemoaning parental indifference and intrusiveness.

This contradiction, which millennial parents inherited from their baby boomer parents, emerged clearly in the 1990s. Both extremes reflect a kind of collective vertigo, widespread feelings of anxiety following the 1960s’ and 1970s’ social earthquakes. With authority questioned, community undermined, individualism unleashed, many Americans felt unmoored. The result was often zigzag parenting, ricocheting between being too controlling and too permissive.

The over-programmed, two-working-parent family added structural stress to this spiritual confusion. Today, in 46 percent of two-parent households both work full time, while over sixty percent of such households  have both parents working at least part-time. Articles abound lamenting “the “toxic parenting,” of “Today’s Exhausted Superkids,” the “culture of overwork,” and “the 24/7 Work Culture’s Toll on Families and Gender equality.” A recent Pew Study found 56 percent of parents feeling oppressed by their working-parenting imbalance.

Figure 1: In Nearly Half of Two-Parent Households, Both Mom and Dad Work Full-Time 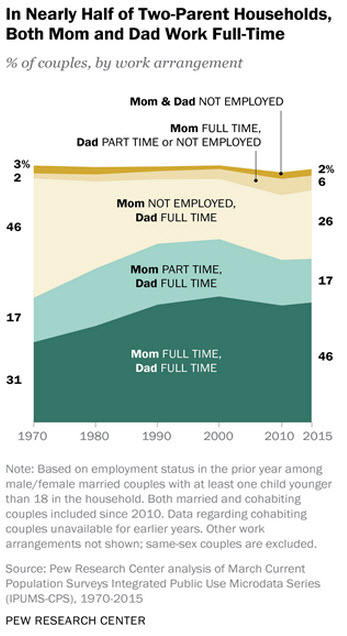 Bill and Hillary Clinton as Parents in Chief

In 1996, as the re-election campaign approached, Bill and Hillary Clinton, as quintessential boomers, played the Good Parent card. They wanted to calm the anxiety they sensed among their peers who often juggled work and home demands, while feeling confused by this ever-liquefying America. Americans, Clinton said, feel “lost in the funhouse.”

Clintonites appreciated the liquid-solid, sacred-profane framing to explain Bill Clinton’s presidency, and the 1990s. While drafting the 1996 State of the Union address, speechwriter Michael Waldman, expanding on Clinton’s celebration of this age of “great challenge and change,” called the 1990s “An era in which things certain seem to melt into air.” Back then, Google was not yet a verb, but somehow, ten drafts later, an intern discovered the source.  This diligent researcher saved America’s Democratic president from quoting The Communist Manifesto in his State of the Union.

Hillary Clinton’s 1996 bestseller, It Takes A Village: And Other Lessons Children Teach Us, marked a milestone in American cultural history.  Synthesizing Carol Brady, Martha Stewart, Nancy Reagan, Jane Addams, and Eleanor Roosevelt, the book reflected the odyssey of a sixties’ elite that rejected traditional mores only to rediscover them. Mrs. Clinton publicized studies showing that divorce, drugs, and promiscuity harm kids, and “every child” needs an “intact, dependable family.” She concluded: “every society requires a critical mass of families that fit the traditional ideal.”

President Clinton’s soccer-mom-oriented policy “Band-Aids” fed a surprising social control streak that coexisted with the society’s growing aversion to being judgmental. Clinton’s paternalistic maternalism proved popular because many hovering parents welcomed backing from outside forces, including the “Nanny State.” Often mistrusting their instincts, millions gobbled up parenting manuals. Modern parents “bring the same skills they used for college and career to parenting and they take it very, very seriously. It’s become a professional thing,” said Heidi Murkoff, the co-author of What to Expect When You’re Expecting, which became the “pregnancy bible,” selling 34 million copies. Both Parents’ magazine and Parenting sold more than two million copies monthly.

Children often experienced periods of smothering mothering alternating with periods of working parents’ neglect. “I give my son all my attention and the other things I need to do—like going food shopping or trying to clean the house—take twice as long as they used to before I had a child,” a typical mother might sigh, reflecting what academics were calling a new “intensive mothering,” or more harshly, “overparenting.” Baby boomer parents drove around with cars proudly proclaiming “Baby on Board,” and convinced themselves that Baby Einstein videos would get their kids into Harvard—even though the company, founded in 1996, eventually offered refunds to compensate for unsubstantiated educational claims. 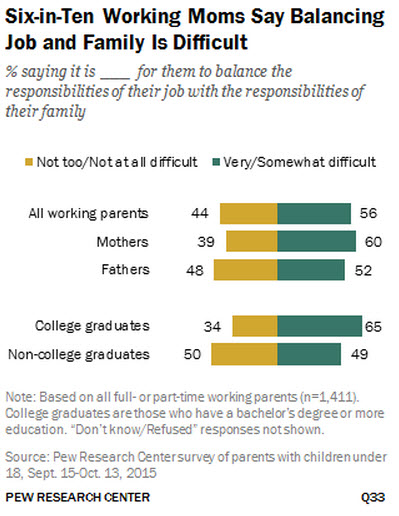 Parenting though the contradictions

As kids matured, their parents doggedly chauffeured them to play dates and tightly-scheduled, carefully-selected, skill-building activities. In adolescence, elite parents pressured their children to perform. As cell phones proliferated, these “electronic umbilical cords” kept youngsters constantly checking in and feeling both protected and scrutinized.

Ironically, this smothering was indulgent emotionally and behaviorally, as long as the kids achieved. John Rosemond, a columnist, wrote a contrarian, bestselling 1996 call to return to “the voice of Grandma, of common sense.” Rosemond rejected “nouveauparenting’s” endless negotiation and cajoling. Advocating a “benevolent dictatorship,” replacing “egocentricity with parent-centricity,” he said, when children ask “why should I listen,” parents should reply: Because I said so—the book’s title.

Pop experts and academics were confirming the importance of parental influence on children’s development, just as more parents were spending more time working. Studies of Romanian orphans deprived of parental contact demonstrated their long-term deficits—and reassured exhausted, stressed-out, over-stretched super moms and dads that “parents matter.” As Cornell Professor Urie Bronfenbrenner preached, the family is the “most powerful, the most humane, and by far the most economical system known for building competence and character.”

The tough, disciplined messages conflicted with many of popular culture’s “whatever” messages.  Self-esteem and self-expression—of both parent and child—were also highly prized. Some teachers did not even want to correct first graders’ spelling mistakes so as not to inhibit these budding writers. Yet nearly 950,000 couples each year destroyed their children’s cocoon by divorcing, rendering family relationships disposable. The divorce rate was dipping slightly, but it was still twice what it had been in the 1960s, with federal statisticians estimating that 43 “percent of first marriages end in separation or divorce within 15 years.” Remarkably, the divorce rate for college graduates was dropping to 16 percent for those who married between 1990 and 1994.

Calling on government to fill the gap

This gap between what many Americans believed their children needed—and what many parents provided actually—put extra pressure on the state. Americans’ historic distrust of Big Government persisted alongside a growing comfort with the Nanny State, in a great displacement of responsibility. Parents were becoming helicopters—a metaphor that first appeared in Haim Ginott’s book Between Parent and Teenager in 1969 but was now taking off. Parents were also becoming bystanders, letting the state take control, and applauding the political push for “child safety laws and regulations.” On December 26, 1995, Maine became the forty-ninth state to pass a law mandating seatbelt use, at least in the front seat. New Hampshire resisted.

Clinton is “a master at playing to people’s fear of losing control,” Time marveled. Clinton’s communication adviser Don Baer said, “V chips, computers in classrooms, school uniforms. They are all about giving her control over the lives of her children.”

Educators will be more successful when framing demands and critiques by orienting them toward extrinsic rewards, such as safety and achievement. Those are “solid” outcomes, even in liquid America. More difficult is when educators focus on the intrinsic, thanks to the confusion resulting from our fluidity. Yet we need more solidity, more grounding, more anchoring, even as we luxuriate in our new freedoms, our new liquidity. Educators should seek a new balance, not only in the classroom but as parents themselves.

Clearly, the crisis in the classroom reflects a deeper crisis within the American community. We no longer pass the “Richard Stands” test – the stereotypical schoolkid’s mangling of the line from the Pledge of Allegiance “for which it stands.” Once, we were a Republic of Something, a country with a clear consensus about our core values – for all the country’s shortcomings, and all our ancestors’ occasional deviations from the accepted social script. Today, we are a Republic of Everything, more open, welcoming, pluralistic, but also a Republic of Nothing, more anchorless, adrift, unsure. It is hard to teach civics in the classroom when Culture Wars rage over just who we are and who we should be.

Reflecting America’s growing polarization, educators find themselves duking it out over tough, my-way-or-the-highway “no excuses” schools or softer, I’m-OK-you’re-OK “whole child” schools. Ironically, both extremes rest on the same insight – that education cannot be limited to academics it must be about cultivating noble values and constructive behaviors too.

The current, empty posturing in the presidential campaign makes it improbable that a new all-American consensus will emerge soon. Meanwhile, day by day, period by period, educators must remember that Maryland school principal who realized that, beyond the traditional 3 r’s of reading, writing, and ‘rithmetic, he had to inculcate some common sense and grounding ethics within his parent body as well as his students. Educators should set the highest academic and behavioral standards they can for students, understanding that they have a dual mission: to help orient parents as well as students in our confusing world, challenging them to develop some kind of moral framework for constructive living based on high ideals and instrinsic rewards, not just utilitarian approaches and extrinsic payoffs.

How mothers spend their time

Melissa S. Kearney and Phillip B. Levine
Wednesday, May 5, 2021
Get daily updates from Brookings