Most people know that their credit score will affect their ability to take out a loan, rent or own a home, and may even be factored into hiring decisions. But recent research from the Board of Governors of the Federal Reserve from Geng Li, Jessica Hayes and Economic Studies Fellow Jane Dokko suggests that it could actually offer important insight into another aspect of your life: who’ll you end up with romantically—and how long you’ll stay together.

Here’s why that’s the case, in 4 charts: 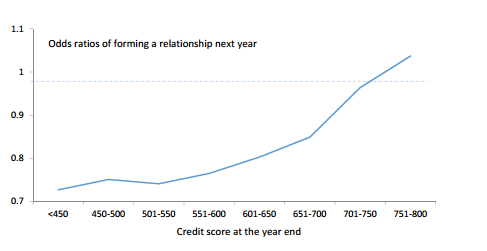 If you’re looking for clues as to whether you and your new significant other will be in it for the long haul, your credit scores might be a good indicator. The researchers found that when both partners enter a relationship with high scores, the odds that they’ll stay together increase. As the chart below shows, couples with the lowest initial average scores are two or three times more likely to separate than the couples with the highest average scores, and the likelihood of separation largely diminishes as scores increase. 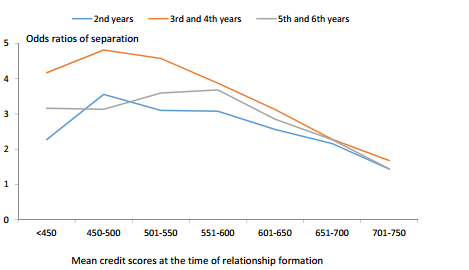 The longer you and your partner are together, the closer your credit scores will get (And there’s a good chance your scores will flip)

Despite the apparent attraction of partners with similar scores, many people still form committed relationships with those whose credit scores differ from their own. So what happens in these cases? Just as many long-term couples end up developing similar mannerisms and views, credit scores also converge over time. The research shows that couples who have sizably different credit scores when they first pair-up see the gap in their scores narrow appreciably over time.

According to the authors, the convergence is mostly driven by an increase in the credit score of the partner who had the lower score when the relationship began. Interestingly though, they note that “it is not rare for the within-couple ranking of credit scores to switch over time. After the first four years, over one-third of the couples see a reversal in the score ranking.” 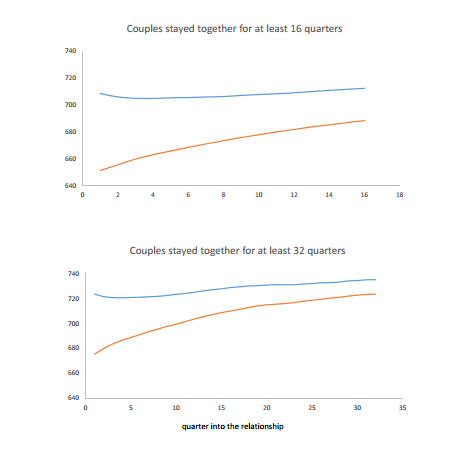 NOTE: The orange curve shows the average credit score of the individuals who had the lower score of a couple as of the time of relationship formation.

Unfortunately, even couples who improve their finances together don’t always stay together, and, for better or worse, the influence your partner had on your credit score isn’t likely to last. The research shows that the average credit score of each member of a couple who splits trends essentially in a parallel fashion during the first four years after separation, “showing no signs of further convergence once couples separate and no longer share financial responsibilities.” 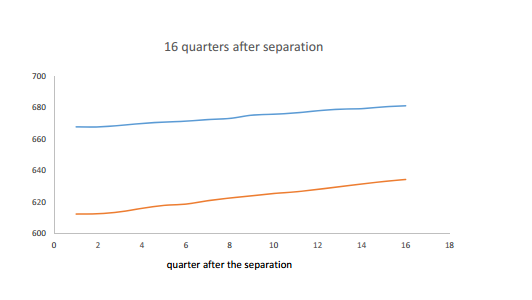 NOTE:  The orange curve shows the average credit score of the individuals who had the lower score of a couple as of the time of relationship formation.

So what should we make of all these very unromantic predictors of lasting romance? Beyond just financial outcomes, the researchers argue that credit scores might actually be indicative of deeper qualities and relationship skills, particularly as they relate to trustworthiness. As they put it, “[Our findings] support our hypothesis that credit scores matter for committed relationships because they reveal information about general trustworthiness….[and] our results present new evidence on how a mismatch in trustworthiness within a household may affect its stability.”


Want more data to help inform your search for a soulmate? Here’s what other Brookings experts have to say about love and marriage in the U.S.:

“Generation Unbound: Drifting into Sex and Parenthood without Marriage” by Isabel V. Sawhill

Is there a shortage of marriageable men?

Multiracial marriages are dispersing across the country


I’ll get by with a little help: Relationships and opportunity in America  by Richard V. Reeves and Emily Cuddy

How to save marriage in America