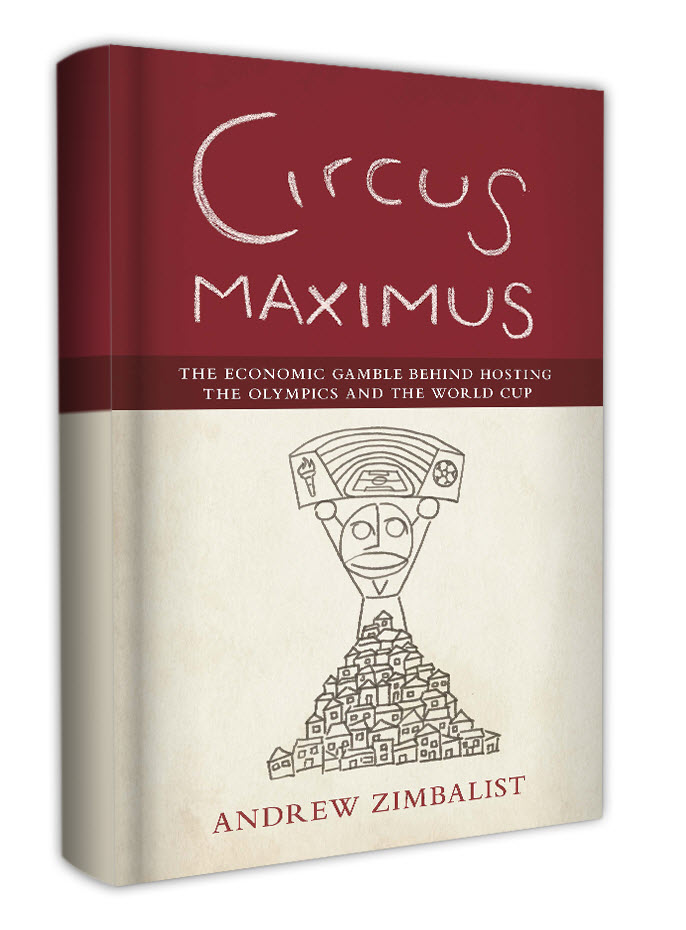 The 2015 FIFA Women’s World Cup is underway in six cities across Canada, the first time that country has hosted the event. Twenty-four teams are competing for the trophy, to be awarded July 5, in venues in Vancouver, Edmonton, Winnipeg, Ottawa, Montreal, and Moncton.

With so much attention paid to the recent FIFA bribery scandal that has included the arrest of many senior officials and the resignation of FIFA President Sepp Blatter, I recently had the good fortune to ask noted economist Andrew Zimbalist a few questions about the Women’s World Cup tournament. Zimbalist, the Robert A. Woods Professor of Economics at Smith College, is author of numerous books and articles on the economics of sports, including his most recent title published by the Brookings Institution Press, “Circus Maximus: The Economic Gamble Behind Hosting the Olympics and the World Cup.”

Q: Will Sepp Blatter attend any of the games?

So it’s interesting that even though Sepp Blatter considers himself to be one of the major figures in the promotion of women’s soccer around the world, that not only did he suggest, many years ago, that they wear shorter and tighter shorts, but he hasn’t gone to the games so far. He didn’t go to the opening game and it’s still unclear if he is going to go to any of the games, including the finals.

Q: How does the Women’s World Cup differ, in a financial way, from the men’s game?

And in this financial report, when they use figures to describe the financial results of the various competitions that they are holding, they make no mention whatsoever of the Women’s World Cup. It’s as if they got no money from Fox for broadcasting the women’s games in the United States. It’s as if they sold no tickets to it at all. That’s FIFA’s gestalt, that’s their presentation of the Women’s World Cup. And it’s really very sad.

Q: So does the Women’s World Cup have poor financial performance?

And in fact, in the United States, the single soccer game of all time that’s had the highest rating was the 1999 final between the U.S. women and the Chinese women [0-0, U.S.A won 5-4 on penalties, featuring Brandi Chastain’s memorable goal celebration]. So there is really a very interesting game out there to behold. And, I think a lot of fans recognize that.

But FIFA once again is singing a different tune.

Q: FIFA requires Men’s World Cup host cities to have stadiums of very specific capacities, which can really make hosting the Cup an economic loser. What about for the Women’s World Cup? Did the Canadian host cities have to build new stadiums?

The Canadian hosts are using stadia and smaller stadia—FIFA imposes much less rigid requirements. New construction has been minimal. For this reason, other things equal, it is probably a better deal (or less deleterious) for a country to host the Women’s World Cup than the Men’s.

Q: What about tourism? You explore the supposed economic effect of tourism in depth in “Circus Maximus,” so what’s the impact for the Women’s World Cup cities?

For some cities, like Vancouver and Montreal, which are tourist destinations at this time of year, it’s quite likely that the soccer fans will displace normal tourists. And to the extent that that happens, there might be no gain whatsoever for the local city, or even a loss.

If you are talking about Edmonton, and talking about some of the other sites, it’s possible that these are not tourist destinations … and bringing in the soccer people could very well be a net addition. So you might get 100,000 hotel nights that you wouldn’t otherwise get. And if you get 100,000 hotel nights and each hotel night is $200, then the hotels may pull in an additional $20 million — a good share of which is remitted back to the home offices of the hotel chains.  And maybe some people are buying food in the restaurants. So there’s some promotion of economic activity there as well.

But we’re taking about a million dollars here or there. For a city the size of Edmonton [pop. 878K in 2014], it’s really a drop in the bucket. To the extent there is such a positive effect, that’s not what this is about.

What this is about is excitement and enthusiasm, maybe a sense of community, a sense of pride that this is happening in your town. So, I think that that’s the positive effect here, it’s not economic development.

Learn more about “Circus Maximus,” about which sports author and commentator Frank Deford said: “Any prospective municipal or national customer who doesn’t read this book before applying for the rights to supply the IOC or FIFA with their land and finances deserves all the debt and humbug they’re going to end up with.”