Since the late 1970s, the United States has entered into open skies agreements (OSAs) with more than 100 countries and partners around the world. The ultimate aim of these agreements is to grow travel, trade, and jobs by allowing airlines to thrive in the free market.

OSAs prevent governments from interfering with airlines’ decisions about routes, airfare, airline capacities, and more. By doing so, OSAs stimulate competition and create more efficient, affordable air services for passengers in the U.S. and around the globe.

At least, that’s the theory proponents of OSAs have been articulating for decades. But do we have any evidence to back it up?

Today, we do. In the first analysis of its kind, Brookings’ Clifford Winston and Washington State University’s Jia Yan find in a new paper that OSAs have lowered airfare 15 percent and increased international flight operations for consumers. You can read the full paper here.

To perform their analysis, the authors used data on 500 major U.S. and non-U.S. international routes from the International Air Transportation Association from 2005-2009. Those routes were operated among 90 countries (242 total country pairings). About one-third of the routes were covered by OSAs.

By estimating a model of airline market demand, pricing, flight frequency, and market structure, the authors were able to discover total savings to passengers flying the OSA routes.

To explore the full effects of OSAs, the authors examined not only differences in airfare between traditional routes and OSA routes, but also differences in flight frequency.

In their analysis of 500 routes, the authors found that OSA routes operated more flights even though they served fewer passengers, with the difference in flight frequency peaking at close to 10 percent in 2007 and 2008. 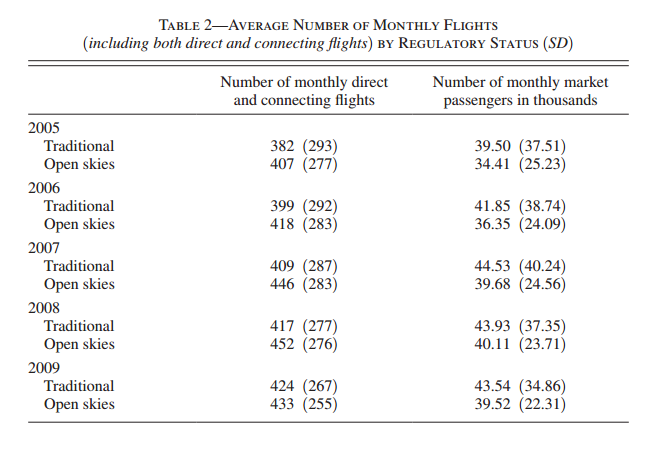 According to the authors’ analysis, OSAs produced significant savings for airline passengers. Looking at the authors’ sample of U.S. international routes operating under OSAs between 2005-2009, passengers saved about 15 percent on airfare.

When combined with increased flight frequency, that airfare reduction equaled $4 billion in annual savings to consumers.

There’s even more good news for those who flew first class (or those who aspire to): Fares were reduced sizably not only for those flying economy, but for economy plus, business, and first class, as well. 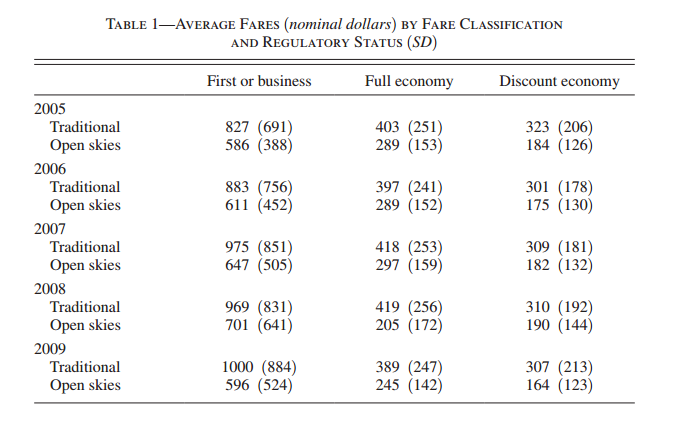 Winston and Yan found that travelers could reap another $4 billion annually if the U.S. were to negotiate OSAs with other countries that have a significant amount of U.S. international passenger traffic.

As some American legacy airlines and labor unions lobby the Obama administration to restrict open skies access for Middle East carriers that some say receive unfair government subsidies, our understanding of the impact of OSAs on consumers becomes increasingly important.

To read more and explore the authors’ calculations yourself, please read the full paper from Winston and Yan.

A problem of fit: Tackling affordability and pricing in higher education