Citing security and fiscal changes since 2007, Chief of Naval Operations Admiral Jonathan W. Greenert described to a Brookings audience yesterday the Navy’s maritime strategy moving forward, emphasizing the “value of presence to be where it matters, when it matters as a sea service.” In the event hosted by the Center for 21st Century Security and Intelligence at Brookings, and moderated by Senior Fellow Michael O’Hanlon—co-director of the center and the Sydney Stein, Jr. Chair—Admiral Greenert explained the importance of the “sea services [Navy, Marine Corps, Coast Guard] functions of power projection, sea control, maritime security, and … access.”

Admiral Greenert, addressing the Obama administration’s “rebalance” to Asia strategy, emphasized that the rebalance “is not single dimensional. It is not just about China … but China is a very important part of it.” He explained in some detail how the U.S. and Chinese navies are engaged in dialogue and cooperation in a number of ways, including meetings of the heads of navy and interactions among junior officers at training locations and academies. Adm. Greenert said that “the navies are well suited to the task” of strengthening ties between U.S. and Chinese militaries and building understanding, as called for by President Obama and Chinese President Xi Jinping during their summit meeting at Sunnylands in California last year. Adm. Greenert elaborated on these points of cooperation:

We are frequently encountering each other in an international domain, the high seas. We encounter each other routinely out there on the global commons. And in a vast area we are often called together to cooperate on areas of shared challenges—humanitarian assistance, disaster relief, typhoons, tsunamis, volcanoes, that ring of fire in the Asia-Pacific region, counter-piracy all around the world. You’re familiar with that. And it wasn’t that long ago we met to search for that Malaysian aircraft, Flight 370.

“The challenge,” the CNO said, “is to get rid of needless, unfounded, unprofessional cases in this interaction we’re ultimately and inevitably going to have at sea. I’m talking about unsafe operations.”

“We’re committed,” said Adm. Greenert, “to the security of the Asia-Pacific. The alliances are strong. And we will honor our treaties. The engagement is increasing both bilaterally and multilaterally and it’s really part of that rebalance. But relationships that I spoke to both with the People’s Republic of China [and] their navy—and India becoming an increasing opportunity—will not be at the expense of our allies. It is not zero sum.” 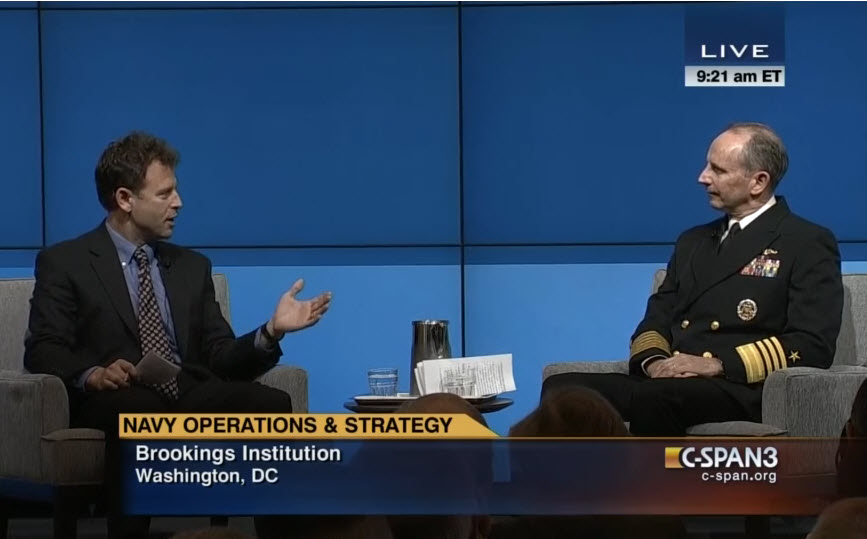 During the question and answer period, moderated by O’Hanlon, the CNO elaborated on a number of issues:

Listen to the full audio here:

And watch the program on C-SPAN.

To expand the Navy isn’t enough. We need a bigger commercial fleet.

Taiwan’s leaders need to coalesce around a defense concept