“The economically turbulent 2000s have redrawn America’s geography of poverty in more ways than one,” writes Brookings Fellow Elizabeth Kneebone in her research brief on the growth of concentrated poverty across the United States. Concentrated poverty is defined as the share of poor residents living in distressed neighborhoods, which are places where at least 40 percent of the population is poor. (Places where at least 20 percent of residents live below the poverty line are called high-poverty neighborhoods.)

Kneebone finds that poverty is now growing faster in suburbs than in cities or rural areas, but it’s growing particularly fast in areas where poverty is already concentrated. This creates a “double burden” for the poor living in those neighborhoods: not only are they struggling with their own poverty, but also from the disadvantages of those around them.

Kneebone writes that “[poverty has] become more clustered and concentrated in distressed and high-poverty neighborhoods, eroding the brief progress made against concentrated poverty during the late 1990s.” She characterizes the nature of the challenge:

The challenges of poor neighborhoods—including worse health outcomes, higher crime rates, failing schools, and fewer job opportunities—make it that much harder for individuals and families to escape poverty and often perpetuate and entrench poverty across generations. These factors affect not only the residents and communities touched by concentrated disadvantage, but also the regions they inhabit and the ability of those metro areas to grow in inclusive and sustainable ways.

The table below lists the 10 U.S. metro areas with the greatest increases in their share of poor people living in Census tracts with poverty rates of at least 20 percent during the 2000s. 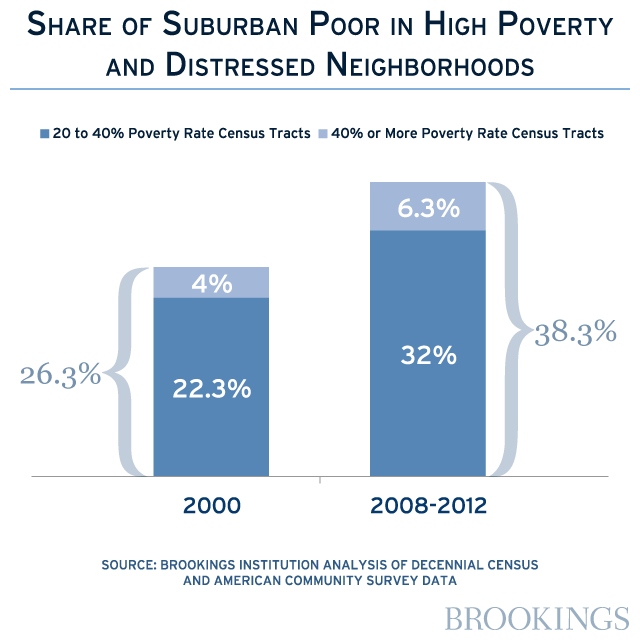