Today marks the 70th anniversary of D-Day, the Allied landings on the German-defended beaches of Normandy, France. It was the largest seaborne invasion in history. This highly coordinated effort among U.S., British, Canadian, and other allied forces, dubbed Operation Overlord, hastened the victory over Nazi Germany on the Western front in 1945.

Like virtually all private and public sector organizations at the time, the Brookings Institution did its part to support the war effort before, during, and beyond D-Day. In 1938, Brookings experts began helping the U.S. government mobilize for the conflict, as is evident from a May 1944 report to the Brookings Board of Trustees that describes Brookings President Harold G. Moulton’s and colleagues’ involvement in key preparatory efforts: 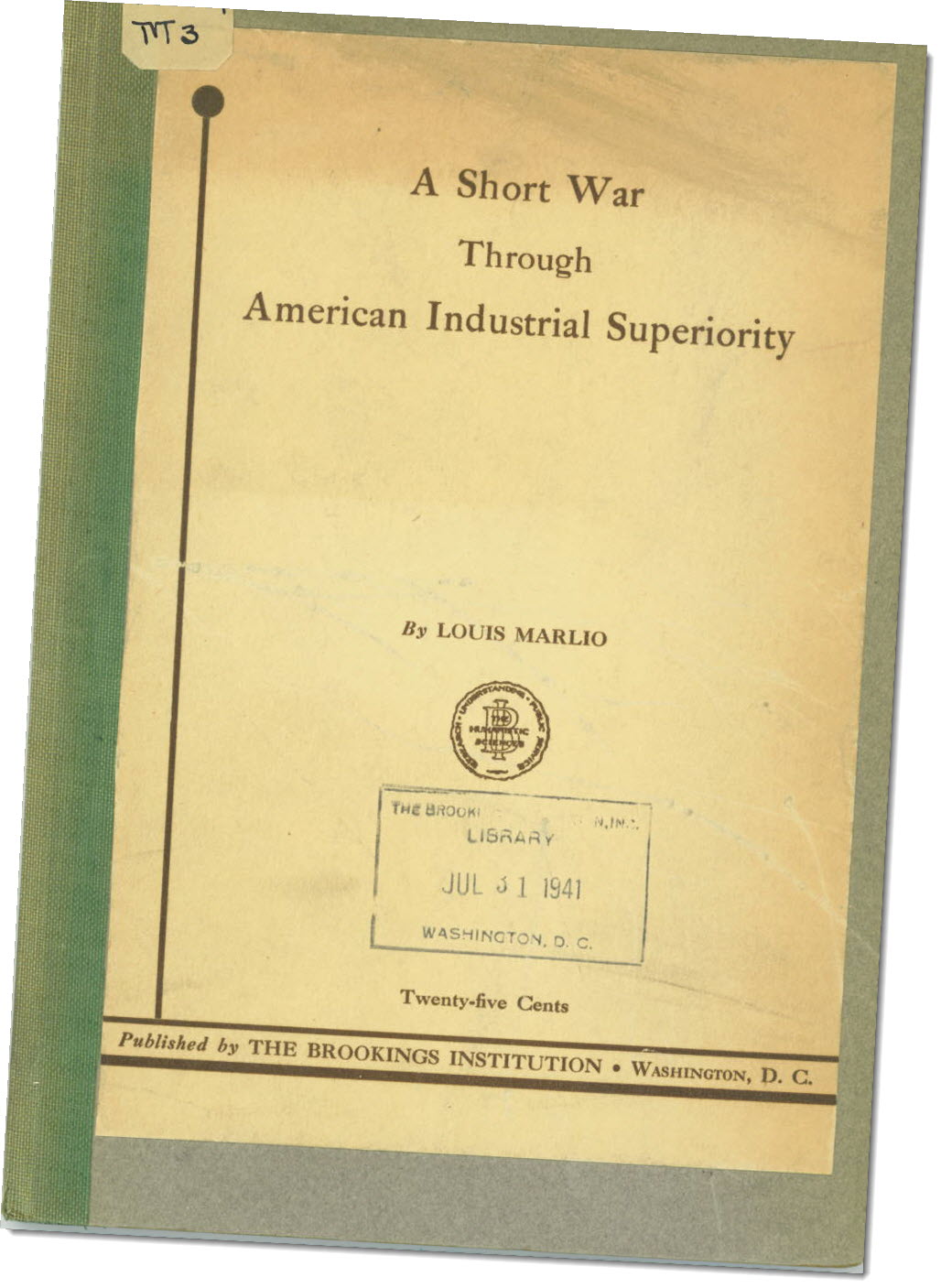 In 1941, even before Japan’s attack on Pearl Harbor that drew America formally into war against both Japan and Germany, Brookings staff member Louis Marlio, a French academic, engineer, economist, and businessman, published “A Short War through American Industrial Superiority.” After analyzing in some detail the factors that had to that point contributed to Germany’s considerable success on the battlefield, most notably through its “concentrated utilization for offensive tactics of an enormous superiority in mobile armaments,” Marlio explained what the United States could do to attain quickly a vast increase in armament. He wrote that:

Marlio proposed a set of measures to achieve these goals, including having defense production plants operate 24 hours per day, every day, restrict production for civilian-only requirements, and convert certain civilian plants to making war supplies. He predicted that although Germany had enjoyed a head start in war production, the British and Americans had “an exceptional opportunity to surpass the Axis group in the production of the armaments which are essential to victory.” Because it would take Germany another one or two years to try to catch up to an accelerated Anglo-American ramp up, Marlio thought that the Allies could win the war by the end of 1943. “With time now operating in favor of the democracies, at least for a two-year period,” he wrote, “there is an opportunity to convert potentialities in to actualities and bring an early end to the conflict which is now consuming the energies of the world.” President Roosevelt established the War Production Board in January 1942.

Two studies in 1942 looked at the status of German and American manpower and requirements. Fritz Sternberg, in “German Man Power: The Crucial Factor,” wrote that “All signs point to the conclusion that in the second year of the war German armament production … reached their high-water mark,” and that the Russian campaign “has absorbed German man power and war materials on a scale unprecedented in this war.” In contrast to Germany, Sternberg wrote, “the United States is ready to make enormous additions to the man power of its armament industry,” including the employment of women, “the importation of Latin-American labor,” and more. While U.S. forces were months away from landings in North Africa, this study was published by Brookings the month before the U.S. Navy engaged Japanese forces in the Battle of Midway.

In a second study, “Is There Enough Manpower?” Harold Metz called “the problem of available manpower for the armed forces, for war production, and for the provision of essential civilian needs” one of the “most important that has to be faced in the immediate future.” Metz worried that the military’s desire to have 12 million men in service by 1945 would have a negative impact on the domestic labor pool. Metz recommended that the U.S. government “immediately make a number of significant decisions and adopt the appropriate measures” he described, including increasing the working week to 46 hours; bringing 6.4 million more into the labor force; drastically curtailing output of civilian goods “at once”; and expanding shipbuilding to move all of those troops overseas.

How to Prevent Germany and Japan from Re-arming 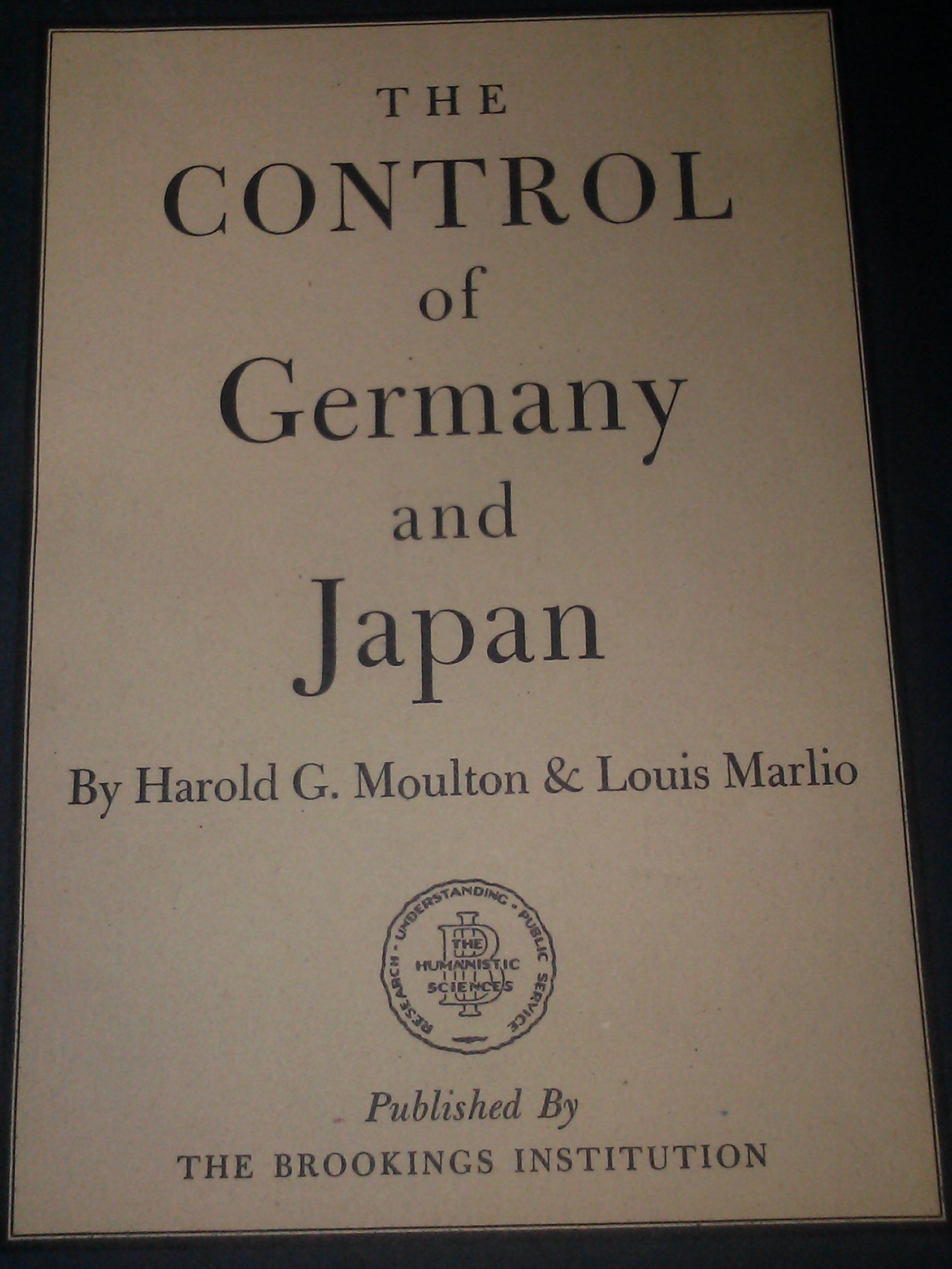 In “The Control of Germany and Japan,” published in August 1944 after the D-Day invasion and during the same month when Allied forces completed landings in southern France (but a full year before final victory over Japan in the Pacific), Moulton and Marlio wrote that “The victorious nations will be confronted at the end of this second world struggle with two distinct though related problems.”

The first, and crucial, task in the generation following the war will be to prevent Germany and Japan from again re-arming. The second is to devise a general international organization which will facilitate the adjustment of international problems of common interest and which in due course may become an instrument for the maintenance of peace throughout the world.

The study focused on the first problem. After analyzing in detail various economic control mechanisms, Moulton and Marlio concluded “the difficulties and complications involved in preventing re-armament by economic measures are so great that they cannot be depended upon to keep Germany and Japan under effective control.” Instead, they argued that “economic devices might usefully supplement a system of military controls.”

We are forced to the conclusion that only military force can be relied upon to give complete protection against nations bent upon aggression. Not only are economic control measures two-edged in their effects, disturbing to world stability, and of dubious reliability, but they cannot, in any case, be enforced unless backed by adequate military power. [italics the authors’]

In the end, the authors called for collective action, rather than for the United States to build its own “impregnable national defense system.” “Participation in a co-operative program for controlling Germany and Japan and co-operation in the development of an eventual collective security system offer the cheapest, surest, and quickest means by which the people of this country may realize the inalienable rights of live, liberty, and the pursuit of happiness.”

Contending with Other War-related Problems

Additional Brookings publications “relating to war problems” during this period included the titles:

Looking ahead to the eventual end of global hostilities, in 1943, Karl Schlotterbeck and Brookings President Moulton warned against government efforts to continue comprehensive price-control programs because it would negatively affect the economy’s ability to absorb returning soldiers and war production workers. In “Collapse or Boom at the End of the War,” the authors wrote that “the stage is being set for a prosperity period immediately following the war that will reach boom proportions.”

In addition to conducting critical wartime research, Brookings also loaned some its brightest minds to the government and even to the military. Daniel T. Selko, a Brookings statistician, was offered a commission by the Army Air Forces in England to study and report on the results of bombing operations on enemy objectives, and left the Institution with the rank of major.

Additionally, Leo Pasvolksy, who specialized in international economic affairs, was loaned by Brookings to the State Department, where he served as the Special Assistant to Secretary of State Cordell Hull. While at the State Department, Pasvolksy studied the economic repercussions of war, and later went on to be instrumental in refining the blueprint for President Franklin D. Roosevelt’s dream of the United Nations and helped shape the Marshall Plan. Learn more about Brookings’s role in the development of the Marshall Plan.

Also, one long-time Brookings economist–Charles L. Schultze–served in combat as an infantryman in Europe.

A Center for International Affairs

Returning to that May 1944 report to the Brookings Board of Trustees, President Moulton looked further ahead past the end of the war and envisioned Brookings having “a great opportunity to become a center for research and education in international affairs.”

On this special anniversary, we honor the courage and sacrifice made by thousands of men and women who devoted their lives to enabling the United States and its allies to wage war against totalitarian regimes.

This post has been updated to include the service of Charles Schultze.