During a recent interview on Bloomberg TV, transportation expert Cliff Winston, the Searle Freedom Trust Senior Fellow, answered questions about the state of the nation’s road system and infrastructure. He said that “certainly as much as a quarter, even a third of the roads could really be in bad shape.” The solution, according to Winston, is not more spending via an infrastructure bank as some have called for, but rather technology that can enable more efficient use and pricing of the system’s scarce capacities in size and durability.

But the big breakthrough appears to be driverless cars, which would solve a lot of our problems by enabling cars to travel closer together, that would minimize the delays, and also greatly improve on safety. So while policy makers have been extremely slow to implement technology, the actual automakers are developing technology that can leapfrog the technology that the policymakers should be implementing.

He addressed the safety issue:

As you probably know, the statistics indicate that fatalities from motor vehicle accidents have been declining. So it’s hard to sort of say that infrastructure per se is causing a serious problem there. However we can do even better. Certainly that’s the idea of driverless cars that will look out for other vehicles and compensate for human behavior, like driving when drunk, and texting and so on and so forth. So we can just continue—if not accelerate, greatly accelerate—the reduction in motor vehicle deaths that we’ve been experiencing over the last few decades.

Winston authored a paper, with Fred Mannering, titled “Implementing Technology to Improve Public Highway Performance: A Leapfrog Technology from the Private Sector Is Going to be Necessary.” The authors believe that the driverless car technology, with just a 10 percent adoption rate, would reduce fatalities and injuries, save travel time and fuel—and save $40 billion annually. At a 50 percent adoption rate, it would save $200 billion per year. As they write in the paper:

The most promising is the recent revelation of the “driverless” car, which does a human driver’s normal job and much more, and has raised the possibility of an entirely new era of highway transportation. Driverless cars are operated by computers that obtain information from an array of sensors on the surrounding road conditions, including the location, speed, and trajectories of other cars. The on-board computers gather and process information many times faster than the human mind can process it. By gathering and reacting immediately to real-time information, and by eliminating concerns about risky human behavior such as distracted and impaired driving, the technology has the potential to prevent collisions and greatly reduce highway fatalities, injuries, vehicle damage, and costly insurance. And it can significantly reduce delays and improve travel-time reliability by creating a smoother traffic flow and by routing and, when necessary, rerouting drivers who have programmed their destinations.

The table below appears in the paper: 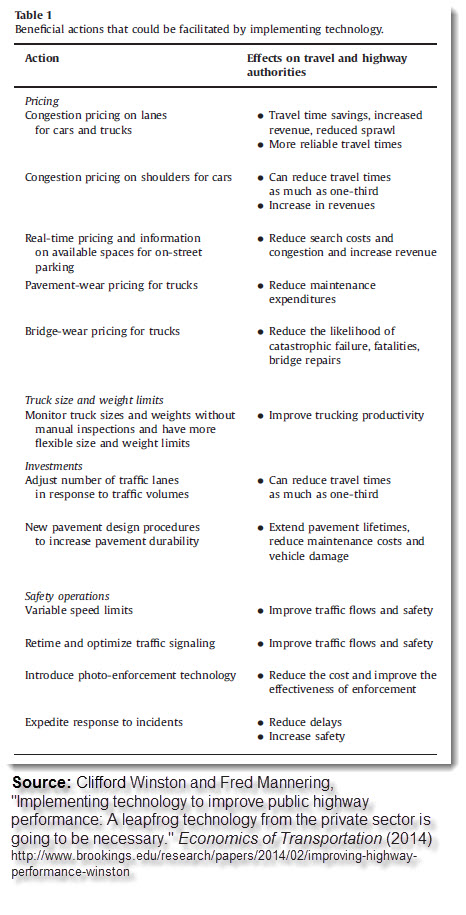 Also see Winston’s article, “On the Performance of the U.S. Transportation System: Caution Ahead,” accompanied by this video:

Atlantic Cities featured the Winston-Mannering paper, pointing to their argument about how transportation officials are biased toward the status quo, a problem that does not affect the private sector.