UPDATE: Sarah Binder writes that “this is big” in a new post on Monkey Cage blog, “
Boom! What the Senate will be like when the nuclear dust settles
.”

Sen. Harry Reid has gone ahead with the so-called “nuclear option” to attempt to change Senate filibuster rules on some executive branch nominations, passing the rule change with a 52-48 vote. In their Vital Statistics on Congress report, Brookings Senior Fellow Thomas Mann and AEI Resident Scholar Norman Ornstein provide data on the number of attempted Senate cloture votes taken from 1979 to 2012, the 96th to 112th Congresses. The chart below demonstrates the average attempted cloture vote taken by party when that party was in the minority. 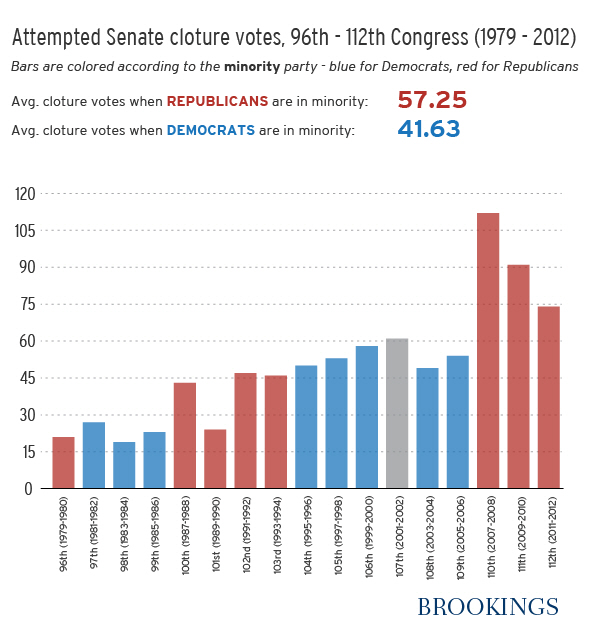 For more data on both attempted and successful cloture votes sine 1919, look up table 6-7 in Vital Stats (PDF).

Senior Fellow Sarah Binder, a leading expert on Congress and congressional history who called, in 2010, the Senate filibuster a “mistake,” offered a recent analysis of Senate cloture votes, writing that “Counting cloture votes remains an imperfect — but still valid — method of capturing minority efforts to block the Senate.”

More recently, Binder wondered whether “Democrats have the guts to go there and, if so, whether that compels any Republicans to stand down.”