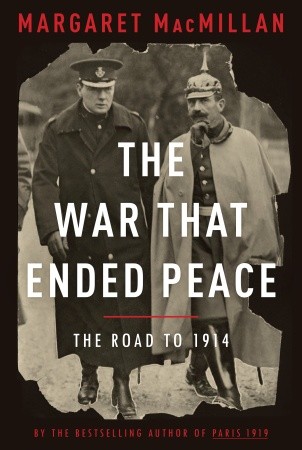 On November 7, Brookings hosted Oxford University Professor Margaret MacMillan to talk about her new book on World War I, The War that Ended Peace: The Road to 1914, and specifically what comparisons may be drawn between the world leading up to that war and tensions around the world today.

After an introduction by Ted Piccone, acting vice president of Foreign Policy at Brookings, Senior Fellow Robert Kagan responded to MacMillan’s opening remarks and moderated questions from the audience. Kagan and MacMillan engaged in an interesting discussion about the changing understanding of World War I’s origins, China’s rise and how it might echo Germany pre-1914, and whether contemporary global tensions have any useful parallels to the world of 1914.

Margaret MacMillan: “And I think we can’t learn clear lessons from history. What we can learn is to watch out for dangerous possibilities.”

MacMillan called the origins of World War I “something we still puzzle over” and that in “too many ways—unsettling ways—resembles that lost world of the years before 1914.” A chief question she asks in the book is not just why did the war break out, but “why did the peace fail?”

Prior to World War I, MacMillan observed, Germany was an emerging power, still unsure of its place in the world and expressed, like emerging powers, a “brash” and “not always tactful” approach to foreign policy. MacMillan pointed out that:

German foreign policy after Bismarck was removed from office was catastrophic. It was simultaneously or alternatively belligerent and then pacifist, which left people wondering what Germany really wanted, with deep suspicions of Germany. And German foreign policy was not well managed. And I think you can say the same thing today of China in its relationship with the United States. … there’s an illusion … that Chinese foreign policy is immensely wise, immensely ancient, draws on the whole tradition of immense subtlety. And I think rather when I look at Chinese foreign policy that it’s often inept and awkward and without clearly defined goals and often reflecting internal divisions.

Kagan said that “Britain’s great failure in my opinion was that it didn’t really draw a clear line” in response to German aggression. He continued with a modern parallel drawing on China:

Today we do face, as you say, a very similar situation. I’m not as confident as you may be that America’s declining, but I am confident that Chinese power is rising, and that the world is going to have to accommodate that some way. And the question is how to accommodate it in such a way as to steer it in the most productive possible emergence and away from a potentially dangerous and belligerent type of emergence. …

My feeling is that the lesson learned from World War I is the United States, which … plays the British role in East Asia, needs to be very clear about what it will do and what it won’t do. It needs to be clear both to allies—the France of their day, whether it’s Japan or Korea or other countries in the region—and it needs to be clear of China, which is the Germany of the time, that it will in fact respond if China behaves in a way that seems unacceptable.

However, Kagan said that MacMillan’s characterization of Chinese foreign policy “may actually be too strong.” He said, “they’ve got to be the most self-aware rising power in history. I can say that America as it arose was completely un-self-aware.”

Margaret MacMillan: “I think the best political science is informed by history, but I think if you don’t understand the history, you’re actually depriving yourselves or we’re depriving ourselves of an opportunity for greater understanding.”

MacMillan emphasized that “I don’t think the United States is declining as much as it no longer as powerful in comparison to others. It’s really the rise of the other nations.” On China’s foreign policy, she added, “there are times when it seems to me sort of rather incoherent.” The other danger in China, she said, is nationalism:

The Communist party really no longer stands for anything very much except economic progress … it doesn’t stand for socialism anymore, it’s long since given up any pretense of that. And so the danger … is it’s going to use nationalism. And as we all know that when you use nationalism it’s like the ‘Sorcerer’s Apprentice,’ you’re calling something up which you can’t then control.

She called particular attention to China’s actions in the South China Sea. Both she and Kagan drew a parallel between Germany’s drive to build a blue-water navy prior to World War I and China’s current ambition to deploy a blue-water navy.

Russia then and now

The discussants also noted some historical parallels between Russia now and in the past. “We all have to remember,” said MacMillan, that:

Russia has always — well, for a long time, since Peter the Great, has always had this uneasy relationship with Europe. Is it a civilized nation? Isn’t it? Where does it belong? It’s always been this tug in Russia between looking east and looking west, and also there’s a deep-seated fear, and I think you saw it in Stalin. You saw it earlier in the 19th century, and I think you see it today that Russia’s not being taken seriously. And I think one of the big mistakes we all collectively made in the West at the end of the Cold War was to treat Russia as if it no longer mattered, and it was marginalized, and the Russians haven’t forgotten it. I mean, I think a lot of Russian policy today can be explained by that, so I do think there’re collective memories and there’re collective ways of behaving.

What are the Balkans of the 21st Century: Middle East? South Asia?

In response to an audience question, MacMillan said:

I think what made the Balkans dangerous was geography and outside interests and great power interests, plus you had all sorts of internal conflicts; conflicts among the nations of the Balkans which because of the outside power interests always ran the danger of drawing people in, and it seems to me the Middle East is a bit the same. Syria was getting very scary for a while because you had a number of outside interests, from Iran to Saudi Arabia to Russia to the United States or Turkey getting involved, and that is always, I think, dangerous.

MacMillan concluded with the sentiment that “history really matters. It helps in our understanding of those we’re dealing with and also of ourselves.” She continued:

We tend to tell ourselves stories about our opponents, and we tend to tell ourselves stories about ourselves, and I think what history can do is bring a certain clarity, and I think encourages to ask good questions. I mean, I don’t think there are clear repetitions of history, and when people say what are the neat lessons of history, I get very nervous because I don’t think — well, you can find any lesson you want, can’t you?”

Get full event audio and the transcript here.

A porpoise to serve: Rescuing the vaquita and the US-Mexico relationship

The 1951 Refugee Convention is falling short of its mission. Could the Global Compact on Refugees help?